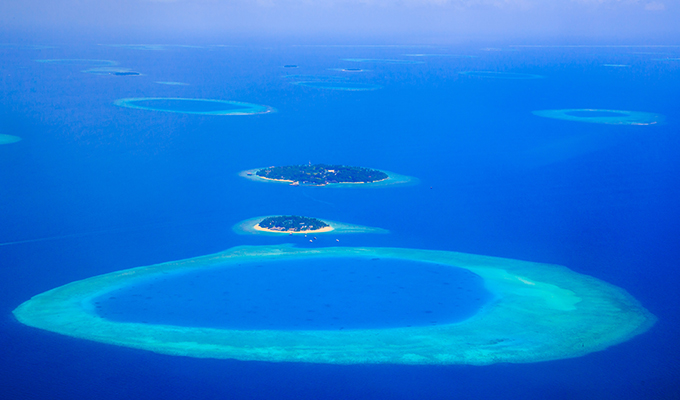 Consisting of 39 states and spanning across three continents, the Indian Ocean Region holds 35% of the global population and accounts for over 17% global land mass. The region is home to some of the fastest growing economies and resource rich economies. The Indian Ocean Region has also increasingly become the geopolitical hotspot for countries within its borders and beyond as well and India lies at the helm of the Indian Ocean Region and is in the centre of the power dynamics at sea. It is an active player in the Indian Ocean Rim Association and has a significant naval presence in the region. Therefore, looking at the regional as well as strategic importance of India in blue economy, this project is made up of dialogue series focusing on:

The project includes the following diginars 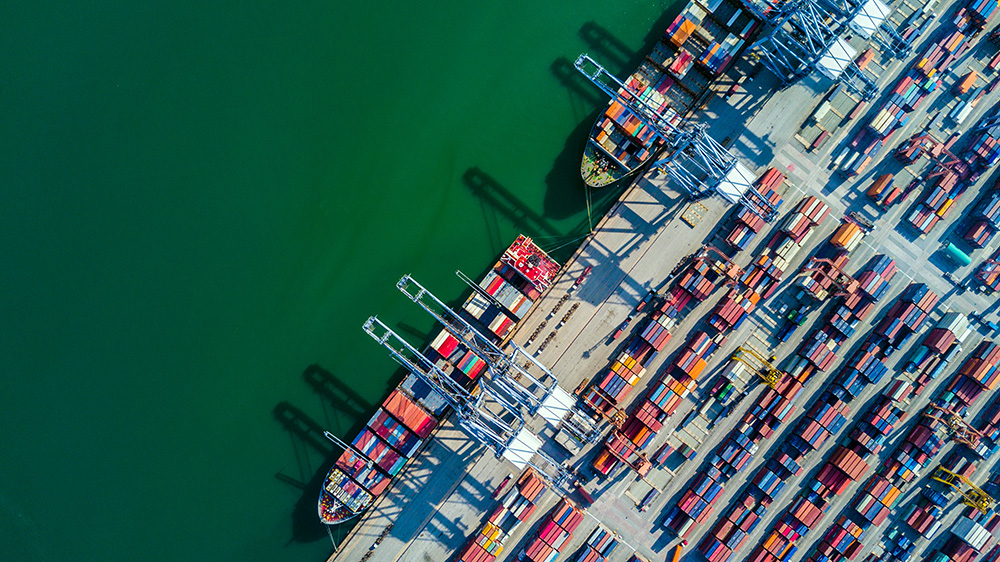 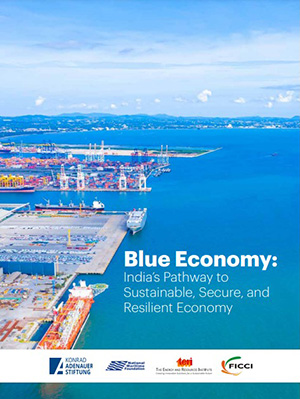 The Blue Economy Working Group Report on “National Accounting Framework and Ocean Governance” by the Economic Advisory Council to the Prime Minister of India, provides a working definition of Blue Economy as - “Blue economy refers to exploring and optimizing the potential of the oceans and seas which are under India’s legal jurisdiction for socio-economic development while preserving the health of the oceans. The Blue Economy links production and consumption to capacity and envisages an integrated approach to economic development and environmental sustainability. It covers both the marine, that is offshore resources, as well as the coastal, that is onshore resources.” With the draft Blue Economy Policy under preparation, the road to developing India’s coasts and oceans is almost complete.

These working group report have emerged as a basis for several Indian institutions to further intensify research and policy focused thinking on Blue economy. As a part of the Quadrilateral dialogue series being jointly implemented by Konrad Adenauer Stiftung India office, National Maritime Foundation and FICCI, this publication is one among many steps to further comprehend, analyse and provide strategies and solutions for sectoral, environmental, social, institutional and governance related issues within the blue economy spectrum. Several institutions working on blue economy provide focused intervention on either ocean or maritime security, economic development or environmental issues- with limited opportunity to establish synergies and create a platform for multi layered and multisectoral approach. The publication focuses on bringing forward the intricate linkages among the three pillars mentioned in the working definition. The publication focuses on several issues such as blue accounting, blue finance, climate change and oceans, ocean health and livelihoods, science and technology, holistic maritime security, industry 4.0 technologies and traditional blue economy sector issues.

The paper focuses on challenges and issues intrinsic to the Blue Economy framework and that need to be embedded in its discussions, strategies and implementation 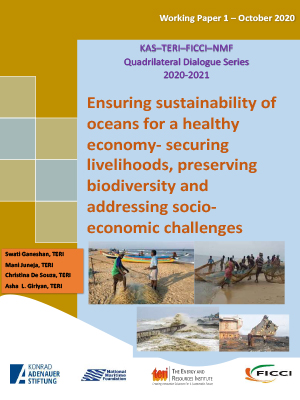 As a part of the Quadrilateral dialogue series being jointly implemented by Konrad Adenauer Stiftung India office, National Maritime Foundation and FICCI, this is the first working paper by TERI. This paper focuses on ensuring sustainability of oceans for a healthy economy through providing sustainable livelihoods, preserving biodiversity, and addressing socio-economic challenges. It discusses the impacts of oceans on coastal communities, livelihoods, and the necessity of addressing sustainability concerns such as climate change and biodiversity. It discusses the role of oceans in ensuring food security, a key imperative for developing countries like India. The paper focuses on challenges and issues that are intrinsic to the Blue Economy framework and need to be embedded in its discussions, strategies and implementation.

It can be concluded from the paper that deliberations on enhancing ecosystem-based services and biodiversity conservation linked livelihood generation need to be critically examined. The framework for accounting blue economy contributions shouldn’t be limited to economic indicators but should encapsulate the value of biodiversity conservation, natural carbon sinks, and the need to preserve the indigenous species. Emerging and new sectors should envision plans and policies taking into cognizance the impact on ocean based eco-systems. While there is no denying the fact that oceans will open new frontiers of science and technology, each new human intervention should take into consideration lessons from the past and ensure mechanisms that preserve oceans’ health.

Steering Ahead - Leveraging Science, Technology and Innovation in Blue Economy

Science and technology can provide the solutions required for India to stay one step ahead in the oceans sector to counter increasing strategic presence, rising economic activity, and address environment and climate change challenges in the blue economy simultaneously. 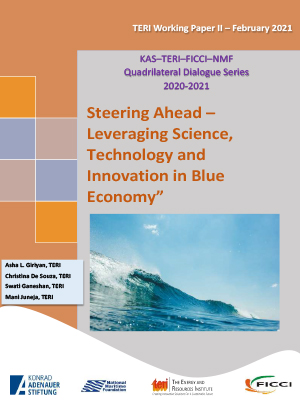 As a part of the Quadrilateral dialogue series being jointly implemented by Konrad Adenauer Stiftung India office, National Maritime Foundation and FICCI, this is the second working paper by TERI. This paper explores the science, technology and innovation (STI) side of the blue economy. Science and technology are imperative to the blue economy as they will ensure that society's socio-economic needs are fulfilled without damaging the ecosystem, and their innovative advances will make new resources and spaces accessible for development. Another major role of science and technology, in regards to the ocean economy, is stimulating improvements in efficiency, productivity, and cost structures in ongoing oceanic activities. Be it is shipping, port facilities, energy, or tourism, scientific research is required to make them more cost-effective.

With the world finally noticing the need to prioritise oceans from an economic and environmental perspective, the need to converge existing scientific developments in blue economy sectors to map their impacts, trade-offs, and advantages is necessary to understand the scope of the work in the future. Thus, it would be beneficial for blue economy sectors to integrate ideas and innovations to understand the overlapping and underlying impacts on other sectors to reduce and eliminate negative consequences.

Blue economy: An ocean of livelihood opportunities in India
Article

Staying Ahead of the Curve: Advancing S&T Innovation and Collaboration to accelerate Blue Economy in India
Events

Tags
Marine ecosystem
Sustainable development
This block is broken or missing. You may be missing content or you might need to enable the original module.