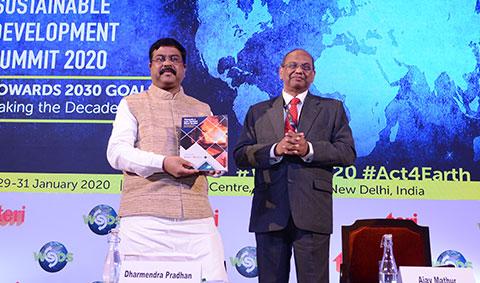 New Delhi, January 30: The Energy and Resources Institute (TERI) has recommended a series of measures to support the growth of the Indian steel industry, whilst reducing its impact on the environment. According to TERI's new report, titled 'Towards a Low Carbon Steel Sector: Overview of the Changing Market, Technology, and Policy Context for Indian Steel', carbon dioxide emissions from India's steel sector could increase up to 837 million tonnes (Mt) by 2050 if steel demand continues to grow, having serious implications for the environment through its contribution to climate change.

The report on decarbonisation of the steel sector was launched by Shri Dharmendra Pradhan, Hon'ble Union Minister of Steel, Petroleum and Natural Gas, on Day 2 of the World Sustainable Development Summit 2020, TERI's flagship event.

Delivering the keynote address in Energy Future Map for India, Shri Pradhan said, "The energy future roadmap is defined by how effectively countries navigate energy transitions. In India, we are in midst of major transformative shift in our energy sector, both in scale and complexity, and also in interdependence across different systems."

Elaborating further, Shri Pradhan added, "The right mix of enablers is put in place to ensure that energy transition is secure, affordable, reliable, and sustainable. In our pursuit to end energy poverty in the country we will remain cognizant of the need to route economic development firmly to achieve the 2030 UN Sustainable Development Goals and commitments made in COP21."

The report on Low Carbon Steel has been prepared by the Energy Transitions Commission (ETC) India, which is a research platform based in TERI in New Delhi. ETC India is the Indian chapter of the global Energy Transitions Commission, which is co-chaired by Lord Adair Turner and Dr Ajay Mathur, Director General, TERI. Shifting heavy industry sectors away from fossil fuels and towards cleaner sources forms an important part of ETC's work.

According to the report, India's steel demand will more than quadruple, from around 111 MT to 489 MT, in the next 30 years. In the corresponding period, the carbon dioxide emissions from the sector are projected to go from 242 MT to 837 MT. This is equivalent to around 35% of India's total current carbon dioxide emissions from fossil fuel combustion and industry, which would be incompatible with limiting the worst effects of climate change.

The increasing demand would also have significant economic implications. Whilst a growing steel sector is great for the Indian economy, providing jobs and valuable products, it could also lead to a rising import bill. For example, India already imports around $10 billion worth of coking coal each year. An increase in steel production based on existing technologies could see this increase to $33-40 billion by 2050.

TERI has suggested a comprehensive package of measures that would keep the sector competitive while reducing its environmental impacts.

The report recommends maximising the use of domestic scrap and deploying energy efficiency measures, as well as facilitating greater resource efficiency throughout the economy. This can start by building on the progress under the Perform, Achieve and Trade scheme and India's upcoming Resource Efficiency Strategy. This can be achieved cost-effectively, helping make the steel sector, and the wider Indian economy, more competitive. Combining greater energy and resource efficiency could lead to a reduction in emissions by up to 45%.

The report also suggests establishing pilot and demonstration plants to test emerging low-carbon technologies. TERI expects that by the 2040s, more radical decarbonisation technologies, which are currently in the demonstration stage, would be commercially available in India. Of particular interest is the substitution of coal or natural gas as a reducing agent with hydrogen, allowing India to reduce its import dependency and reduce emissions. The report also recommends stimulating the demand for low-carbon steel, through developing standards, public procurement schemes, or voluntary buyers' clubs. Finally, the report suggests introducing a penalty for emissions in the steel sector from 2030 onwards to send a clear signal to the industry to start planning for deeper decarbonisation technologies.

Measures such as these could put the sector on a pathway to reduce emissions to near zero levels soon after 2050, making India the first country to industrialise while decarbonising its steel production.

Will Hall, one of the authors of the report, said, "Our report shows that the Indian steel sector both can and should substantially reduce its emissions over the coming decades, to reduce its environmental impact and remain competitive. Acting now can help iron and steel plants further reduce their energy bills, help India reduce its import dependency of key resources, and kick start the development of domestic expertise in new technologies that will be vital in India's transition to a prosperous, low carbon economy."

Green Steel through Hydrogen Direct Reduction: A Study on the Role of Hydrogen in the Indian Iron and Steel Sector
Policy brief

Tags
Energy transitions
Themes
Energy
This block is broken or missing. You may be missing content or you might need to enable the original module.