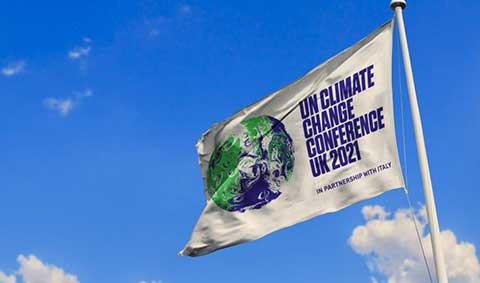 Experts from India and the UK deliberated on scaling up adaptation to build resilient countries, communities and corporates. They were speaking in the last of the four-part COP 26 webinar series organized by TERI, in partnership with the British High Commission, New Delhi. These discussions were held under the aegis of TERI's annual conference, the World Sustainable Development Summit, to be held in February 2021.

December 4, 2020: Giving an overview of CDRI's ongoing efforts, Mr Sandeep Poundrik, Director General, Coalition for Disaster Resilient Infrastructure said, "We have launched study to enhance the resilience of power sector in Odisha based on analysis of cyclone Fani. We are assessing airports that have been affected adversely and those that have successfully managed the risk of extreme events." He added that transport, telecom and power sector are the top three sectors which the CDRI is studying in India and these studies will be extrapolated to benefit stakeholders and communities which face similar risks. The CDRI, which currently has 18 countries and 4 multi-lateral organisations as members, was launched by Prime Minister Modi at the UN Climate Action Summit in 2019.

Held with the intent of building dialogue between India and the UK on strategies needed to accelerate climate action ahead of the COP 26, the webinar underscored the need to bring adaptation and resilience on top of the agenda. Talking about the UK government's efforts in this direction, Mr. Ken O'Flaherty, Regional COP26 Ambassador for Asia-Pacific and South Asia, Government of UK, said, "The UK is working towards an ambitious international campaign on adaptation and resilience in the run up to COP26 and beyond, which will focus on four key areas: increasing public A&R funding, shifting private finance towards climate-resilient investments, encouraging and supporting countries to develop clear A&R plans, expanding protection against climate-linked disasters through insurance and investment in early warning systems."

Mr VelGnanendran, Climate and Environment Director, FCDO added about the UK government's Call for Action on Adaptation and Resilience, which advocates for putting adaptation at the centre of decision making and which till date has been signed up by 120 countries.

Highlighting that India is one of the most vulnerable countries to the impacts of climate change, Dr Ajay Mathur, Director General, TERI,said there is a need to quickly scale up learning from small scale pilots. He added, " One size fits all does not work anymore; the design, resources and the capacity needed to address adaptation and resilience concerns are different from the requirements of yesterday."

Commenting upon data that shows relatively less funding (21% according to OECD study in 2018) is given to adaptation, and even lesser reaches the local communities, Prof Saleemul Huq, Director, International Centre for Climate Change & Development (ICCCAD), Bangladesh, said, "If adaptation funds are not prioritized for the most vulnerable, it is a dereliction of duty by those who are working on this agenda. One has to engage with local communities and involve them in decision making. They are not beneficiaries. They are holders of knowledge on how to combat climate change and that's a great resource."

Highlighting that physical risks brought upon by climate change to sectors such as agriculture and industry are certainly going to affect the profitability of banks and financial sector and the overall fiscal stability of the region, Ms Anu Jogesh, Policy and Governance Lead, Acclimatise South Asia, said there is a clear business case for financial institutions to fund adaptation and resilient communities and corporates.

Moderating the session on Risk Informed Early Response, Mr. RR Rashmi, Distinguished Fellow, TERI, said there is a need to look at climate information at the granular level. "It is important to see how can we convey the climate information to the community in a manner that they can use and therefore structure their responses adequately."

Mr Benjamin Webster, Head, Secretariat for the Risk-informed Early Action Partnership (REAP) added that there is need to go beyond siloes, use common language to explore better collaborations, ensure that action is people centric and empowers not just the country authorities but also the local level authorities.

From "science of what" to "science of how" and now to "science of where" should be emphasised so that location-based scientific services can be effectively planned and deployed to meet the "last mile" challenge of risk reduction", said Mr Saurabh Bhardwaj, Fellow and Area Convenor, Centre for Climate Modelling, TERI. He added that it is it is important to ensure that science-based solutions are scalable, shareable and integrated so that seamless transfer of experience and greater access to data is achieved in action.

Tags
Climate adaptation
Climate resilience
COVID-19
Themes
Climate
This block is broken or missing. You may be missing content or you might need to enable the original module.