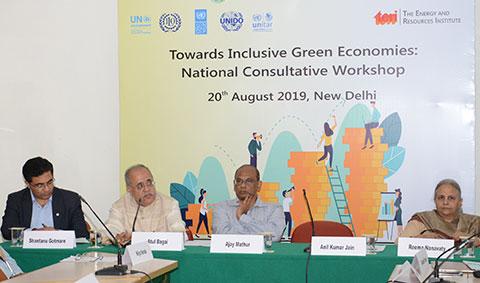 New Delhi, August 21: A transition to a green economy in India must be a 'Just Transition', keeping in mind vulnerable livelihoods. A Just Transition would need to look at the labour surplus issue in India especially for those employed in agriculture and informal sectors. This was among several issues pertaining to a green economy that were discussed on Tuesday at the national consultative workshop on 'Towards Inclusive Green Economies' held at The Energy and Resources Institute (TERI) in New Delhi under the Partnership for Action on Green Economy (PAGE) India initiative.

Just Transitions are a process and a goal to undertake green actions that advance job creation, social justice, and fair transitions for workers, enterprises and communities on an equal footing.

The consultations brought out the need for looking at the labour surplus and informal sectors in India. A report by ILO shows that 77.4% jobs in India are 'vulnerable'. However, Cristina Martinez, Senior Specialist, Environment and Decent Work, ILO, said that 14.2 million jobs could be added in the Asia-Pacific and India if countries adopt changes in energy use that limit global warming to 2°C.

"India has the challenge of reaching a $5 trillion economy, meeting its climate goals to keep global temperatures to 1.5°C, and at the same time catering to provide jobs for 1.3 billion people," said Shantanu Gotmare, Country Representative, Global Green Growth Institute.

Reema Nanavaty, Executive Director, SEWA, stressed on the inclusion of women and the poor in the transition to a green economy and said they should be at the centre of planning and policy making. She also said that there should be a mechanism to incentivise youth and communities to regenerate forest land, wetlands, etc. to create green jobs.

To help countries achieve green economies, five UN agencies – UNEP, ILO, UNIDO, UNDP and UNITAR – and working closely with national governments. In India, TERI is the implementing agency for the stocktaking study that is part of the initiative. It has so far held regional consultative workshops for north, south and western India, apart from Tuesday's national-level consultation.

Underlining the importance and urgency of such measures, Dr Ajay Mathur, Director General, TERI, said it has not come a day too soon. "There is no question of the direction in which we must move, it is now only about speed. A work plan for just transition is possible. We need to look at the kinds of interventions, business models, ecosystem, and policies that make sense," he added.

Atul Bagai, India Country Head, UNEP, who gave the opening remarks at the inaugural session of the day-long workshop said, "PAGE is present in 18 countries, of which India, which joined just last year, is the largest."

Tags
Environment policy
Government policy/regulations
Themes
Resource Efficiency & Security
Environment
This block is broken or missing. You may be missing content or you might need to enable the original module.