The High Seas or the Areas Beyond National Jurisdiction (ABNJ), are a global common, which covers about two-thirds of the ocean surface and more than 90% of its volume and contains rich biodiversity of marine life. Oceans are the largest known carbon sink in the world. 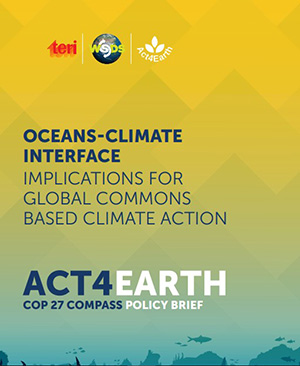 Despite this, oceans have largely remained absent from climate change negotiations under the Conference of Parties (COPs) that is convened under the United Nations Framework Convention on Climate Change (UNFCCC). Until COP21 held in 2015, the oceans were largely omitted from the climate change negotiations altogether. This is ironical as in the 1992 foundational text the UNFCCC clearly recognized the role of marine ecosystems. This policy brief focuses on the global commons of marine areas beyond national jurisdiction and climate action, examining the interface between climate and ocean governance. The objective of this brief is to bring forth issues pertaining to the gaps in the climate-ocean interface – especially when examining the same from the lens of global commons. The high seas are governed by an incomplete patchwork of international organizations and treaties. The United Nations Convention on the Law of the Sea (UNCLOS) offers minimal guidance on climate change. Existing agreements under the United Nations Framework Convention on Climate Change and other Rio Conventions lack a mandate for the high seas. This paper argues that a shift is needed in the climate-oceans interface to incorporate greater synergies, not just with the Rio Conventions but also with UNCLOS.