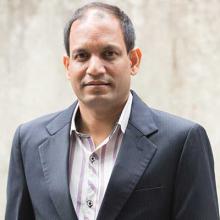 Dr Fraddry D'Souza received his doctorate degree in (Marine) Microbiology from Goa University, in 2004, wherein the entire research study was carried out at the National Institute of Oceanography (NIO), Goa. During his PhD tenure, he was extensively involved in major projects, such as 'Isolation and characterization of corrosion products of metals and alloys immersed in marine waters' and ‘Bay of Bengal Process Study (BOBPS)'. After the doctorate degree, he was awarded Erasmus Mundus Scholarship in Portugal and Spain Universities, 'Joint European Masters in Fresh and Coastal Water Management'. Soon after he joined the TNO Science and Industry, The Netherlands, where he worked as scientist in applied marine industrial research for about five years. He has worked on a number of areas in marine research ranging from biogeochemistry, resources management, marine fouling, biocorrosion, and biocontamination. In 2011, he joined TERI Goa Center as a Fellow. He is now perusing his interest in coastal resources management, aquaculture, bioremediation, water pollution and conservation, bioaccumulation studies and coastal biodiversity assessment, and currently involved in several national and international projects as lead investigator. Dr D'Souza has published more than 25 research publications in national and international peer-reviewed journals on wide range of topics.