India's tryst with renewable power goes back decades. In the past few years, it has grown even more ambitious regarding the share of renewables in its energy mix.

India is unique in having deep clarity about the relevance, utilization, and importance of renewable energy for its social and economic growth. It began with setting up the Commission for Additional Sources of Energy in 1981, to creating a separate administrative set up in the form of the Department of Non-Conventional Energy Sources in 1982, which was later upscaled to a full-fledged ministry in 1992. Since then, there has been no looking back concerning the focus on promoting energy generation via utilization of the abundantly present renewable resources in the country.

Looking at the potential of commercially exploitable resources, it is estimated that over 900 gigawatts (GW) of electricity can be generated, comprising around 102 GW from wind and 750 GW from solar power, apart from contributions of small hydro and biomass resources. Renewable energy, once considered only as an alternative source of energy, has now come to the centre stage and has become an integral part of the solution to meeting the nation's energy requirements in a sustainable manner.

This policy integration was put into vision by Prime Minister Narendra Modi during the inauguration of the first Renewable Energy Global Investors Meet (RE-Invest) in 2015 where he talked about the “seven horses of energy”. He asserted that India has already focused on thermal, gas, hydro, and nuclear power generation and we must now shift our efforts to power generation through solar, wind, and biogas sources. He added that India’s stress on renewable energy is not aimed at "impressing the world but to meet our own people's energy requirements".

Currently, India is in the middle of one of the largest programmes globally for the expansion of its renewable power sector by targeting 175 GW of renewable power to be installed by 2022. This would comprise 100 GW of solar power, 60 GW of wind, 10 GW of biomass, and 5 GW of small hydro power. India’s Intended Nationally Determined Commitments (INDCs) under the Paris Agreement reaffirm this continued growth through its intention to increase the share of non-fossil fuel generation in the total installed capacity to around 40 per cent by 2030. The current share of non-fossil fuels including, hydro, nuclear, and renewables, is around 32 per cent. Taking it to 40 per cent would require accelerated growth of renewable power.

In its quest to achieve these targets, India has introduced a number of innovative policy initiatives unparalleled in the world. Important amongst these are: 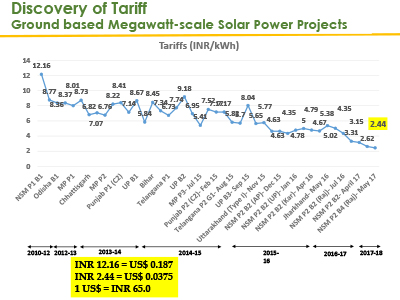 As a result of these policies, solar and wind tariffs have fallen to Rs.2.44 and Rs.2.64 per unit, respectively in the recently held auctions conducted by the Solar Energy Corporation of India Limited. These tariffs are below the national average power pool cost. Solar and wind power have thus definitely come a long way and are now being seriously considered a part of the effort to make affordable power available to all. Future success would, however, demand more innovative solutions to address the infirm nature of such power-generation sources through hybridization and development in energy storage. That would be the next milestone in our journey towards our goals and commitments.