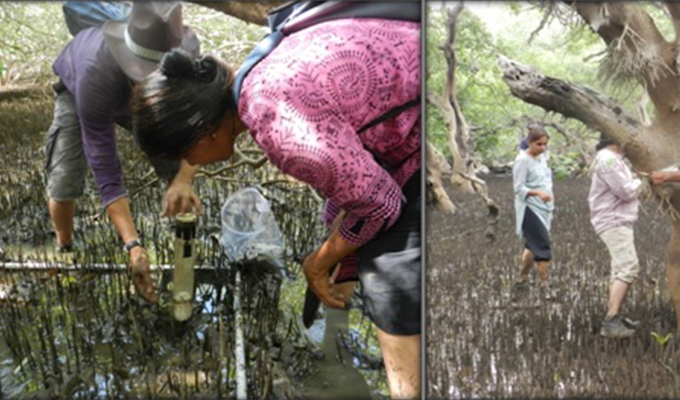 A project supported by GIZ assesses the ecological baseline of the coastal marine protected area – the Dr. Salim Ali Bird Sanctuary in Chorao, Goa. The broad objectives of this project is conducting review and suggest participatory management of the Island estuarine ecosystem and to conduct baseline assessment of ecological status of the marine protected area. The baseline ecological status was conducted using three main biophysical Indicators such as Habitat distribution and Human impact which includes inventory of all habitats and areas of human impacts at the study area through transect surveys; the second indicator includes population and community structure and composition with a rapid biodiversity field survey to determine the community composition and structure which evaluated the population structure of specific species with focus on endemics, keystone, disturbance indicator species, threatened species etc. The third indictor dealt with Environmental assessment such water and sediment quality of both biotic and abiotic parameters.

The biodiversity mapping includes the projects on documentation of People's Biodiversity Register (PBR) supported by Goa State Biodiversity Board. The work involves recording and inventorization, in consultation with the local people, of the occurrence of various species of flora and fauna and resources present in the region, which may be of local significance. It is also an attempt at recording rapidly eroding knowledge of the medicinal uses of local plants, and the occurrence and management practices of land races of cultivated crops. Thus the PBR provides a platform through which members of a community may initiate steps towards better management of their biodiversity resources. The PBR were performed in Goan villages of Velim, Chodan-Madel, Nuvem, and in the City of Panaji. The development of the PBR in Chodan-Madel has been facilitated by the support of the MoEFCC-GIZ-CMPA Project.