New Delhi, July 27: With four of the five clean energy transition goals announced by India at Glasgow set for 2030, The Energy and Resources Institute (TERI) released a roadmap charting the feasible pathways to achieving the ambitious decarbonisation targets in New Delhi on Wednesday.

Prime Minister Shri Narendra Modi had announced India’s aim to attain 500 GW non-fossil fuel capacity and 50% of its energy requirements from renewables by 2030 at COP26 in 2021. India also vouched to reduce the carbon intensity of its economy by less than 45% and bring down the total projected carbon emissions by one billion tonnes till 2030. Though the time-bound targets are challenging, authors of the TERI discussion paper note they are achievable and, in fact, may be a lower cost pathway to meet the growing energy demands of the country. It could also position India as a competitive renewable energy hub, they observe.

In his special message delivered at the launch, Mr RK Singh, Union Minister for Power and New and Renewable Energy, Government of India, emphasised India’s commitment to energy transition targets though the country has one of the lowest per capita emissions. “By 2030, the total capacity for power production would be about 820GW. Out of that, more than 500GW will be non-fossil,” he said. Pointing out that India has already started adding storage capacity to renewable energy, Mr Singh added, “We have come out with one of the largest bids on storage. We are trying to bring down the price of storage by adding volume.”

Apart from suggesting policy as well as technological interventions to achieve the 2030 goals, TERI’s Roadmap to India’s 2030 Decarbonisation Target also calls for state leadership in the development of pumped storage plants, and feed-in-tariff for solar generation.

Emphasising the significance of such a roadmap to decarbonisation, Dr Vibha Dhawan, Director General, TERI, said, “While India has the right policy regime in place, we need to adopt new energy storage solutions and technologies which bring stability and flexibility to the grid. We need collaborations for investing in research and development of new technologies.”

Mr Ajay Shankar, Distinguished Fellow, TERI, and lead author of the paper, highlighted the suggestions that emerged from the discussion paper. “In the solar power sector, we need to depart from the process of bidding in the kilo Watt range for villages. Instead, we need a feed-in tariff attractive enough for private investment and approved by the State Electricity Regulatory Commission. It will save money for the DISCOMS and will lead to a surge in investments. In the wind sector, we should start off-shore wind development irrespective of the cost to get the industry going,” said Mr Shankar.

Mr AK Saxena, Senior Director, noted that while the COP26 targets were ambitious, they can be met through a well-planned roadmap, and the discussion paper, he added, is a step in the direction. The paper co-authored by Mr Shankar, Mr Saxena, and Ms Taruna Idnani, Project Manager, emphasize the criticality of appropriate policies in unlocking the potential of decentralized renewable energy generation.

The implementation of feed-in-tariff in the kilo Watt range would increase farmer incomes, create jobs and improve the quality of power supply in rural areas. The experts moot the need to scale up bidding for utility wind and solar power projects, and suggest introducing requisite flexibility into the power system to integrate wind and solar power generation. Meeting the energy decarbonisation targets demand innovative research, and the discussion paper focusses on the significance of power system studies, including transient and dynamic stability studies and transmission planning. 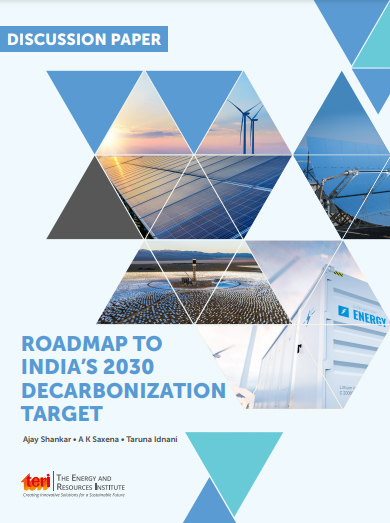 Apart from advocating strategies, the paper examines the prospects of India growing into a cost-effective and competitive manufacturing hub for renewable energy. It suggests the extension of Production Linked Incentive scheme to cover the full spectrum of renewable energy equipment production, solar panels, mirrors and sensors for solar thermal, batteries for grid use, and hydrogen. With the green energy open access rules being notified, the DISCOMs need to give Commercial and Industrial consumers the choice to buy carbon free electricity on a real time basis with separate tariffs. This choice, observe the TERI authors, may be extended to all consumers since it would accelerate the transition to carbon free electricity.

Timely and appropriate action in implementing the requisite range of measures is the key to India meeting the 2030 goals, assert the authors.

Tags
Energy planning
Energy policies
Energy transitions
Energy security
Energy supply
Themes
Energy
This block is broken or missing. You may be missing content or you might need to enable the original module.