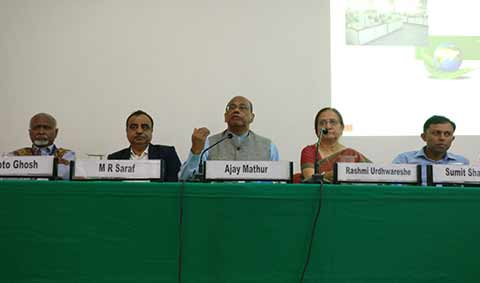 TERI and ARAI conducted an exhaustive scientific study for Delhi-NCR to derive sectoral contributions to air pollution (PM levels) and project the future to develop air quality management plans. The study was based on 2 approaches (See report) :

The results of both the approaches were assessed and future scenarios were developed in order to propose air pollution mitigation strategies for Delhi-NCR.

TERI and ARAI presents the study report of the source apportionment of PM2.5 and PM10 concentrations in Delhi NCR based on two approaches - Receptor and Dispersion modelling. TERI carried out the dispersion modelling and ARAI carried out the receptor modelling study. Both the model results are found to be consistent, and also broadly aligned with the earlier study conducted by IITK in 2015. This new evaluation also takes into consideration additional key elements:

The study also projects future sectoral emissions and air quality and tests several interventions which can reduce pollution in the region. This will enable development and testing of appropriate strategies for control of air pollution in Delhi-NCR.

The modelling was based on comprehensive air quality monitoring which was carried out at twenty representative locations for 10 days at each location in for two seasons (in 2016-17) in Delhi and NCR. Both PM10 and PM2.5 average concentrations were found to be more than the prescribed National Ambient Air Quality Standards by CPCB [Central Pollution Control Board]. The daily permissible limits of PM2.5 and PM10 are 60 g/m3 and 100 g/m3 respectively, as per the National Ambient Air Quality Standards. The average concentrations that were monitored were:

Contributing sources were identified using both receptor and dispersion models for the two seasons. The results for PM2.5 are as follows:

Key findings of the study for Delhi city are presented below:

(i) Within the 30% contribution of the industrial sector in PM2.5 concentrations (during winter) in Delhi; the breakup is as follows:

(ii) Within the 28% transport sector contribution in Delhi [winter PM2.5 concentrations accounting for both primary and secondary contributions]

(iii) Within the biomass category, biomass burnt in rural kitchen and agricultural fields is the dominant factor contributing to PM2.5 and PM10 concentrations

(iv) In the Others category (within the overall contribution of 11% during winter PM2.5 concentrations)

(vi) In PM10, the share of different sub-sectors almost remains same as PM2.5. However, the dust share is considerably increased with road dust and construction contributing to 8% and 6%, respectively, in Delhi's PM10 concentrations. Their share increases to 10% and 7%, respectively in NCR during winters.

The report also presents the sectoral shares in PM10 and PM2.5 concentrations of various other towns of NCR namely Bahadurgarh, Panipat, Ghaziabad, Noida, Gurgaon, and Faridabad. The report also provides geographical contributions which show that the average contribution of Delhi's own emissions in Delhi PM2.5 concentrations was found to be at 36% in winter and 26% in summer with variations in different places of the city.

With a view to understand the contributions of future sectoral growth in air pollution in the region & in order to formulate feasible strategies, future scenarios were also developed. In this regard, probable future PM concentration growth scenarios have been assessed for the year 2025 (medium-term) and 2030 (long-term).

The BAU scenario assumes that all current policies are in place in 2025 and 2030 with probable enforcement stringencies.

BAU scenario reveals that the PM concentrations would be higher, if emission control strategies (such as BS-VI norms, LPG penetration, gaseous pollutant control standards in industries, zig-zag technology for brick kilns, etc.) envisaged in BAU are not implemented. These emission norms are expected to contribute significantly towards reducing (30%) concentration of PM10 and PM2.5 by the year 2030.

Based on the strategies for control, an alternative scenario was developed for 2025 and 2030, which shows reduction in average concentration (of both seasons) by 58% in PM2.5 and 61% in PM10 (Figure below) with respect to BAU.

The alternative scenario envisages meeting the prescribed daily standards in the winter season and hence, it may be safely assumed that annual average standards may be met considering lower concentrations during other seasons. The alternative scenario suggests desirable interventions, which are expected to have higher impact on PM concentrations through reduction of pollutant emissions in 2025 and 2030: