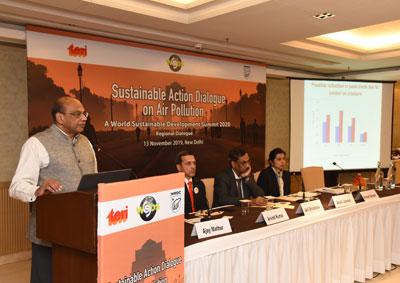 New Delhi: November 13, 2019: The Energy and Resources Institute (TERI) has prepared a strategic plan for solving Delhi's air pollution crisis which worsens during winters every year.

Speaking at the Sustainable Dialogue on Air Pollution, co-organised with Natural Resources Defense Council (NRDC), Dr Ajay Mathur, Director General, TERI said, "Delhi's air pollution is a solvable problem. There are solutions both in terms of technologies and for meeting the necessary costs. TERI is putting forward definitive measures for addressing peak and non-peak pollution sources, both of which are absolutely essential to improve Delhi's air quality. We can immediately start working towards implementation if all stakeholders come together."

Dr Sumit Sharma, Director, Earth Science and Climate Change Division, TERI added, "Some of the peak air pollution episodes during winters can be avoided by controlling agriculture crop burning and firecrackers. But this can only bring down the pollution levels to the 'very poor' category. However, if we address both peak and non-peak sources such as transport, industries, residential and road dust, it is possible to reduce Delhi's PM 2.5 level by 46% during winters, which can restore air quality to 'moderate' category."

Mr C K Mishra, Secretary, Ministry of Environment, Forests and Climate Change (MoEFCC), Government of India in his keynote address at the dialogue said, "In the last two years, efforts by the government in tackling air pollution have been phenomenal but the results achieved are marginal. We need at least a 50% reduction in current air pollution levels. This needs sustained efforts. Emergency and knee-jerk reactions will not help."

He further added that air pollution cannot be the government's business alone. "Everyone has a role to play. Even if there is an adverse cost, it should be paid," he said at the sustainable dialogue, a pre-event to TERI's annual flagship event, the World Sustainable Development Summit (WSDS).

Talking about the global experience in tacking air pollution, Mitchell Bernard, Interim President, and Chief Counsel, NRDC said, "It has helped when air pollution has been linked to the health and economy of a country. It is not a narrow environmental issue. There is a huge public health cost. And there is a strong economic argument to be made for combating air pollution on account of lost productivity, medical costs, and opportunity costs."

Speaking about the looming health crisis, Dr Arvind Kumar, Chairman, Centre for Chest Surgery, Sir Ganga Ram Hospital said, "In 1988, patients of lung cancer were mostly known smokers. In 2018, 50% of cases of lung cancer are non-smokers." He warned that Delhi is likely to see an explosion of lung cancer cases in the coming years.

TERI's assessment suggests that the impact of stubble burning in adjoining states of Delhi can be brought down by 40% during the days of peak burning activity. Key recommendations to control crop burning include-

Further, TERI has recommended community burning of firecrackers by allowing only Resident Welfare Associations (RWAs) to purchase a fixed quota allotted to them. TERI has advised to permit the sale of one-fifth the amount of firecrackers sold in 2019.

Tags
Air pollution
Air quality
Biomass burning
Transport
Themes
Air
This block is broken or missing. You may be missing content or you might need to enable the original module.