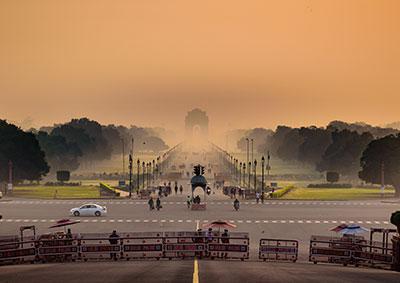 New Delhi, November 03, 2019: Air pollutant levels in Delhi have been increasing steadily in the last 15 days and have increased alarmingly during the last few days. According to The Energy & Resources Institute (TERI), this sharp increase in air pollution levels in Delhi is mainly attributed to agricultural burning activities in neighbouring states, apart from adverse meteorological conditions. In order to prevent, exposure to severe pollution that can have a harmful impact on health, TERI advised caution and avoidance of non-essential exposure to the air that can happen through travel. It also appealed to organisations to allow its employees remote modes of working and parents to cut outside exposure time for their children.

Dr Ajay Mathur, Director General, TERI said, "Along with year-round sources of pollutants, agricultural burning is a prime contributor in the severe deterioration of air quality in Delhi, in these days. Large numbers of fires in the upwind states were detected between 26 and 30th October, which are now, after the transport of the pollutants through atmospheric winds, adversely affecting the air quality in Delhi. In order to avoid exposures to the air, non-essential commute should be curtailed. The government of Delhi has already announced closure of schools. Public and private organisations in Delhi/NCR should allow people to work from their homes."

Dr Mathur also said that the employees of TERI in Delhi NCR region have been asked to work from home on Monday, 4th Nov 2019, and will be using e-connectivity to be in touch for work. He said "With the reduction of commute of around 1000 employees, it is a small contribution from TERI to control pollution in the city. We hope that other organizations will join in this effort to reduce our combined environmental footprint, and that our collective action will help in reducing the exposure of people working in Delhi to severely bad air quality."

TERI has done an extensive research to study the main contributors of air pollution in the region. According to their analysis based on all monitoring stations in the city, the averaged PM2.5 levels in last 15 days, show a steady increase that can be directly attributed to growing number of fires detected in a region upwind of Delhi. The levels reached extremely high levels in last few days breaching the Severe+ category (PM2.5 > 300 μg/m3), with some locations showing up daytime hourly PM2.5 values of >1000 microgram/m3, pointing towards emergency conditions.

Based on the TERI&ARAI source apportionment study 2018, the sources of pollutants over the entire winter season, and specifically during the days when agricultural burning is prominent, are shown in Figure 2.

The current levels show that ratio of PM2.5 to PM10 is more than 0.8, which indicates the dominance of combustion related particles in the air. Moreover, while 24-hour average PM2.5 concentrations have increased by 2.68 times in last 10 days, NOx concentrations have not increased much. This indicates the dominance of a source like agricultural residue burning which emits high PM2.5 emissions, but less NOx. Measurements also indicate increased CO levels, which are also indicate enhanced biomass burning activity.

The Energy and Resources Institute (TERI) is an independent, multi-dimensional organisation, with capabilities in research, policy, consultancy and implementation. It has pioneered conversations and action in the energy, environment, climate change, and sustainability space for over four decades. The institute's research and research-based solutions have had a transformative impact on industry and communities. Headquartered in New Delhi, it has regional centres and campuses in Gurugram, Bengaluru, Guwahati, Mumbai, Panaji, and Nainital, supported by a multidisciplinary team of scientists, sociologists, economists and engineers, and state-of-the-art infrastructure.

Tags
Air pollution
Air quality
Themes
Air
This block is broken or missing. You may be missing content or you might need to enable the original module.