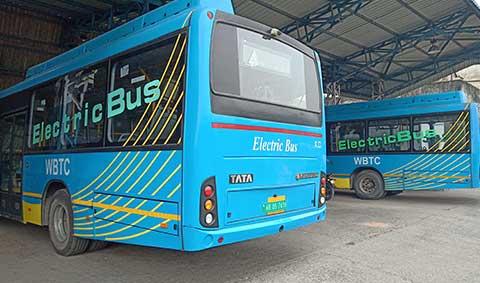 The case study on e-buses in Kolkata highlights the important role that electrifying public transport can play in reducing local air pollution and climate change emissions; IEA says this could enable Kolkata to act as an inspiration for other cities globally

New Delhi, June 15 2020: As part of its extensive work on electric vehicles (EVs), the International Energy Agency (IEA) published a case study on the impacts of increasing the share of e-buses in Kolkata, India. The Energy and Resources Institute (TERI) conducted the case study with support from the IEA, the West Bengal Transport Corporation (WBTC), and the Department of Transport, Government of West Bengal.

The IEA's flagship report - Global Electric Vehicle Outlook (GEVO) 2020, which releases today, showcases the study of deployment of e-buses in Kolkata, as well as studies from cities such as Shenzhen, China; Helsinki, Finland; and Santiago, Chile. The study will also be featured in the key forthcoming IEA publication ‘Multiple Benefits of Energy Efficiency'.

"Energy efficiency is about learning from each other and highlighting good examples of success that all can benefit from. I am pleased to thank TERI, WBTC, and the Government of West Bengal for their important work on the cross sectoral implementation, and commend their highlighting of the range of impacts of e-buses in Kolkata. Case study examples such as this showcase best practice and the multiple benefits of energy efficiency, as well as enabling Kolkata to act as an inspiration for other cities globally," said Dr Brian Motherway, Head of Energy Efficiency Division, IEA.

Suvendu Adhikari, Minister-in-Charge, Department of Transport, Government of West Bengal, said, "We are committed to provide a smart, clean, and eco-friendly transport system in the state and to introduce vehicles run on cleaner fuel, thereby reducing carbon footprint. It is my conviction that this step will significantly reduce particulate matter (PM) pollutants and will help citizens breathe cleaner air."

Currently, a third of particulate matter pollutants from transport in Kolkata come from buses, due to the comparatively high pollution associated with the conventional fleet. Since 2019, the WBTC has introduced 80 domestically manufactured e-buses and a further 150 will enter service in the mid-term, with the aim to fully electrify the fleet by 2030, which would entail 5,000 e-buses in operation. Increased deployment of e-buses like these also incentivises local manufacturing and stimulates the industry to move towards electrification.

Prabhat Kumar Mishra (IAS), Principal Secretary, Department of Transport, Government of West Bengal, said, "Kolkata's transportation network is diverse and has been running for centuries. Kolkata has been a pioneer in e-mobility and we would like to increase this for a better environment. I would like to thank IEA and TERI for including Kolkata as the only city from India and showcasing its successful operation of electric city buses in the flagship report, Global EV Outlook (GEVO) 2020."

Expanding the e-buses fleet can directly lead to cleaner air locally, as well as contribute to reducing greenhouse gas emissions. By 2030, it is expected that the e-buses will reduce annual CO2 emissions by almost 200,000 tonnes. Furthermore, the WBTC is planning to solarise bus depots along with the use of battery storage, thereby further contributing to decarbonising the transport system.

"Electrification of public transport is an effective way to bring down air-pollution levels in cities, and e-buses are one of the most potent solutions to initiate this transition to sustainable at-scale mobility. TERI is delighted on the launch of its case study on the successful implementation and operation of the e-buses model in Kolkata. The support received from the WBTC as well as from Government of West Bengal for this study is deeply appreciated," Dr Ajay Mathur, Director General, TERI, said on the occasion.

The financial case for e-buses

Aside from cutting down on air pollution, the transition to electric public transport also makes financial sense since battery-operated buses are cheaper to run, at a third of the operational costs of a diesel bus. With large scale deployment, it is envisaged that even the capital costs of these buses, which are currently high, will come down in the near future, as seen in other countries.

Behind the successful running of 80 e-buses in the city is a smartly planned charging station placement and operation scheme, which leverages existing infrastructure and provides both slow and fast charging options. With increasing variability in the power systems with greater deployment of renewables, e-buses could provide a smart balancing opportunity as they interact with the grid.

A further success factor has been the establishment of strategic partnerships, including close cooperation with power distribution companies that has enabled productive discussions about tariffs leading to arrangements on application of a time of day tariff system, which will be financially beneficial for the running of the e-buses. Collaboration with distribution companies has also made it possible to avoid large investments in electrical network augmentation.

"Kolkata has been passionately running tramway, an electrical mode of transport, for more than a century. Just like the trams, the city has introduced EVs with an aim to decarbonise the transport sector and pioneers nationally in the operations of e-buses for public transport. In the future, WBTC would be increasing the number of e-buses in the streets of Kolkata and surrounding areas with an aim to reduce pollution, dependence on fossil fuels, and providing a safe and comfortable journey to the commuters. I would like to thank my WBTC team for taking our bus system to global level through IEA's GEVO 2020," said Rajanvir Singh Kapur (IAS), Managing Director, WBTC.

The International Energy Agency (IEA) works with governments and industry to shape a secure and sustainable energy future for all. The IEA is at the heart of global dialogue on energy, providing authoritative analysis, data, policy recommendations, and real-world solutions.

What would make Indians buy EVs? Our survey has some answers
Article

TERI survey: Would you buy an Electric Vehicle?
Events

Tags
Electric mobility
Themes
Transport
This block is broken or missing. You may be missing content or you might need to enable the original module.