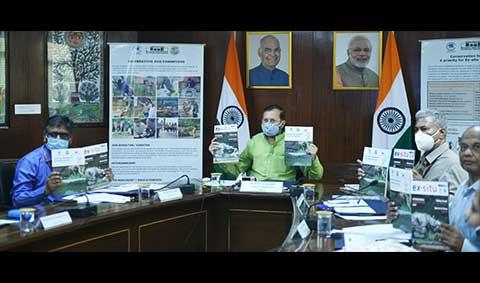 A collaborative project of CZA and TERI saw the culmination of the first-of-its-kind study on Economic Valuation of Ecosystem Services of National Zoological Park, New Delhi.

New Delhi, October 5, 2020: The Central Zoo Authority, in collaboration with, The Energy and Resources Institute (TERI) launched Campaign RoaR (Respect and Revive): Exploring Human-Animal Relationships to mark the celebrations of Wildlife Week 2020 in India.The campaign includes e-competitions and an online lecture series for students to learn about the conservation of animals in their wild habitats.

Presiding over the launch event, Hon'ble Indian Minister for Environment, Forest and Climate Change Mr Prakash Javadekar said, "India has 160 zoos and we will make efforts to develop them better as well as to promote public participation in conservation of wildlife. Only the development of zoos can ensure harmony between wildlife and humans."

At the virtual discussion, the Minister also released a report titled 'Economic Valuation of Ecosystem Services' based on TERI's study in the National Zoological Park, New Delhi. Commenting on the report, the Minister added, "Nature and its ecosystem services have been taken for granted for so long. The study undertaken at the National Zoological Park in New Delhi highlights the potential of zoological parks as an important habitat in providing numerous ecosystem services which improve the local environment."

The Wildlife Week 2020 – being celebrated in India from 2nd to 8thOctober – provides an opportunity to raise awareness about animals and threats to their habitats. The RoaR campaign has received 2319 entries from students which include 1846 paintings and 473 poems in the following age categories: 8-10 years and 11-13 years for both the contests that ran with two themes: 'My Favorite Animal (मेरा प्रिय वन्यजीव)', and 'All Wild Animals are My Friends (जंगल शहर में गूंज है, वन्यजीव हमारे दोस्त हैं).

Dr Ajay Mathur, Director General, TERI said, "Campaign RoAR aspires to provide a platform to celebrate the special place of wild animals in their many varied and beautiful forms and also offers the opportunity to appreciate the interactions between people and animals around us. Zoological parks in India are unique ecosystems which provide several services of local and national significance."

The report 'Economic Valuation of Ecosystem Services' highlights that the total annual economic value of the ecosystem services – such as biodiversity conservation, employment generation, and carbon sequestration – is estimated to be INR 422.76 crore (2019-20) and the one-time cost of services such as carbon storage and land value provided by the National Zoo is estimated to be INR 55,209.45 crore.

"This study gives a powerful baseline assessment of the important ecosystem services provided by the zoo and also highlights the importance of habitats such as Zoological Parks and the need for its preservation for human wellbeing," added Dr Mathur.

Dr Sanjay Kumar, Director General of Forests and Special Secretary (DGF&SS), MoEFCC said that zoological parks in India have evolved from being menageries to conservation hubs to save species, conduct animal research, and spread wildlife awareness.

Under RoaR campaign, interesting talks will be held in the form of live webinars throughout the week on various topics related to wildlife conservation. A virtual session on nature drawings and illustrations will also be conducted for students across the country. The campaign will conclude on 8October 2020 where winners will be awarded and all participants will receive certificate of participation.

The Central Zoo Authority (CZA) is a statutory body of the Ministry of Environment, Forest and Climate Change (MoEFCC). It has been constituted under the section 38A of Wild Life (Protection) Act 1972 with an objective to complement and strengthen the national effort in conservation of the rich biodiversity of the country, particularly the fauna as per the National Zoo Policy 1998. More information at: http://cza.nic.in/

The Energy and Resources Institute (TERI) is an independent, multi-dimensional organisation, with capabilities in research, policy, consultancy and implementation. It has pioneered conversations and action in the energy, environment, climate change, and sustainability space for over four decades. The institute's research and research-based solutions have had a transformative impact on industry and communities. Headquartered in New Delhi, it has regional centres and campuses in Gurugram, Bengaluru, Guwahati, Mumbai, Panaji, and Nainital, supported by a multidisciplinary team of scientists, sociologists, economists and engineers, and state-of-the-art infrastructure.

Rajaji National Park: A Biodiversity-rich Landscape in the Lap of River Ganga
Article

Losing the benefits of forests to degradation?
Article

Tags
Environment education
Wildlife conservation
Biodiversity
Wildlife week
Themes
Environment
This block is broken or missing. You may be missing content or you might need to enable the original module.