India is in the midst of an energy transition, with important social and economic implications depending on the pathways that are chosen. India's energy pathway will define the basis for its future development, including economic prosperity, business and employment opportunities as well as health impacts. At the same time, current investment decisions in India's energy sector will have a substantial impact on combating global warming and securing the livelihoods of people in India and elsewhere. 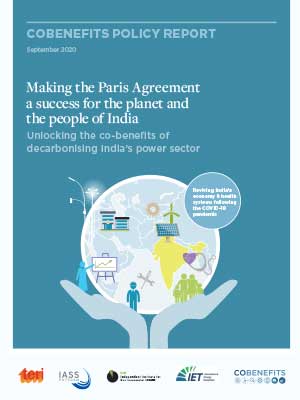 The COBENEFITS Policy Report for India compiles key findings from the COBENEFITS India Assessment series, quantifying the co-benefits of decarbonising India's power sector in view of future oriented employment and skills development, economic prosperity in rural areas and health benefits related to less carbon-intensive power sector which can be instrumental in recovering the national health system. The COBENEFITS India Assessment series can be accessed through www.cobenefits.info. Building on the opportunities presented, the report formulates a set of policy actions to allow government institutions to create an enabling political environment to unlock the social and economic co-benefits of the new energy world of renewables for the people of India. The policy options have been generated in a series of roundtable dialogues and government consultations with government institutions, industry associations, expert and civil society organisations in the years 2019 and 2020.

In light of the current crisis, the results indicate that recovering from the economic shocks of the COVID-19 pandemic and avoiding running into severe future shocks triggered through the climate crisis do not represent conflicting interests but a mutually reinforcing coping strategy. The Paris Agreement and the 2030 Agenda are offering important internationally agreed frameworks to ensure economic recovery in the shorter term and to building resilient economies and health systems in the long run.

Unlocking the co-benefits of renewable energy for the people of India: 10 opportunities for policymakers

(1) Enhance individual mini-grid capacities: Solar-powered mini-grids of high installed power capacity can remain economically viable and cost-competitive with the centralised grid in rural areas of India. Solar mini-grid systems greater than 100 kW with interest rates as low as 8 % and a 15 % return on equity can achieve grid parity and a low cost of electricity supply to the rural consumer.

(2) Mechanism for co-existence of mini-grid with central-grid: To drive the growth of higher power capacity mini-grids that are essential for reliable 24/7 rural electrification, mechanisms are needed to be developed (in collaboration with the private sector) to make it suitable for the mini-grid developer to transfer the system's assets to the state-owned utility when the central grid arrives at the area served by the mini-grid.

(3) Merit-based incentive scheme for mini-grids between 100 kW and 700 kW: A special capital subsidy incentive scheme can be developed for the viable mini-grid systems between 100 kW and 700 kW built in specific rural developmental zones defined by MNRE. The government would be advised to collaborate with the rural developmental bank and national/international funding agencies in order to smoothen and achieve the overall process.

(5) Continuous increase in share of renewables: India can significantly boost employment by increasing the share of renewables. These technologies tend to be more labour intensive than conventional technologies, and by 2050 more than 3.5 million people could be employed in the renewable energy sector (five times more than the entire Indian fossil-fuel sector (coal, gas, nuclear) employs in 2020).

(6) Establish a new authority to re-skill workers from coal sector: Creating a central authority/ agency/ body to train or re-skill the workers from the coal sector will support workers in benefiting from direct employment in the renewable energy sector. The solar sector would require a total of 256,000 skilled, 320,000 semi-skilled and another 570,000 un-skilled people by 2050 (REMap scenario). Considering the size of the coal sector in India and the future manpower requirement in the solar sector, this high impact action would be championed by Ministry of Skill Development And Entrepreneurship in close collaboration with other ministries and government departments.

(8) Adding another level of ambition: In view of economic and health system resilience India is advised to building and following even more ambitious renewable energy pathways. Even the most far-reaching decarbonisation scenario presented in this report (NDC PLUS) is insufficiently ambitious to prevent a 4.3% reduction in Indian GDP and an increase in premature deaths in 2050 compared with 2020 levels.

Making the Paris Agreement a Success for the people of India

(10) Making Co-Benefits part of India's pledge to the planet and its people: In terms of mitigating climate change Nationally Determined Contributions (NDCs) are more than technical documents. They are also showcases for national audiences of the contribution and global responsibility a country is willing to take in reducing its GHG emissions. India's NDC in addition also aims to exploit the co-benefits of addressing climate change along with promoting economic prosperity for its people. 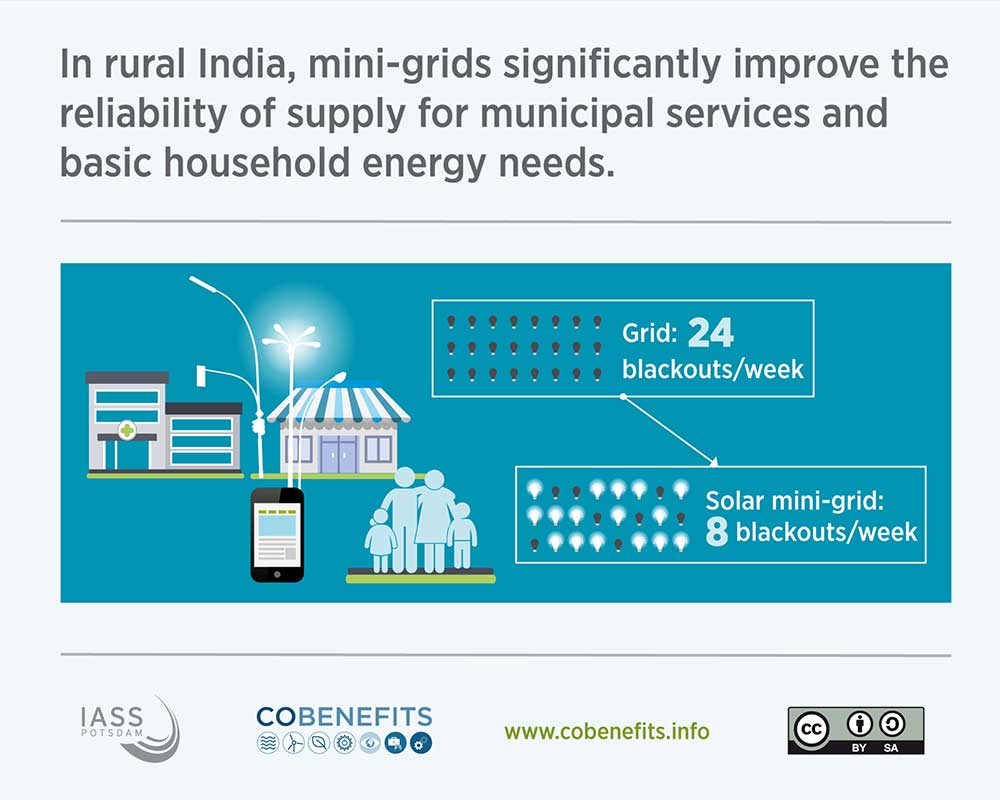 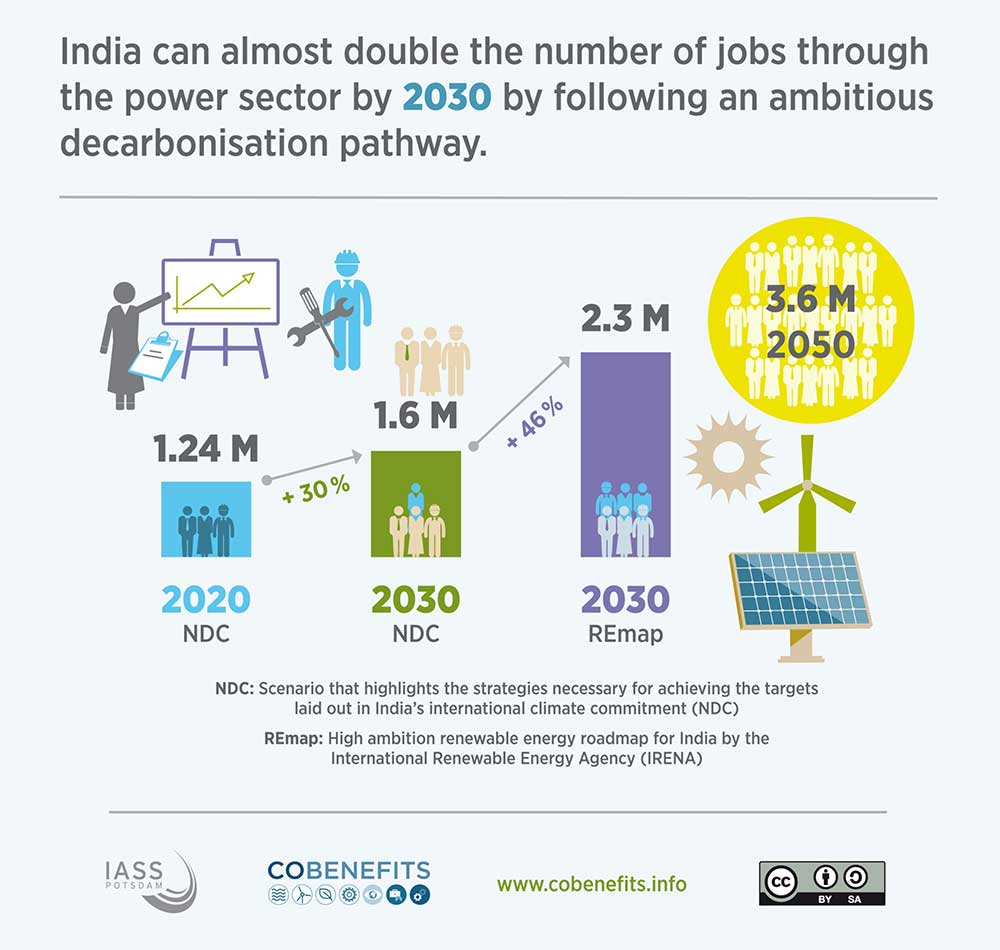 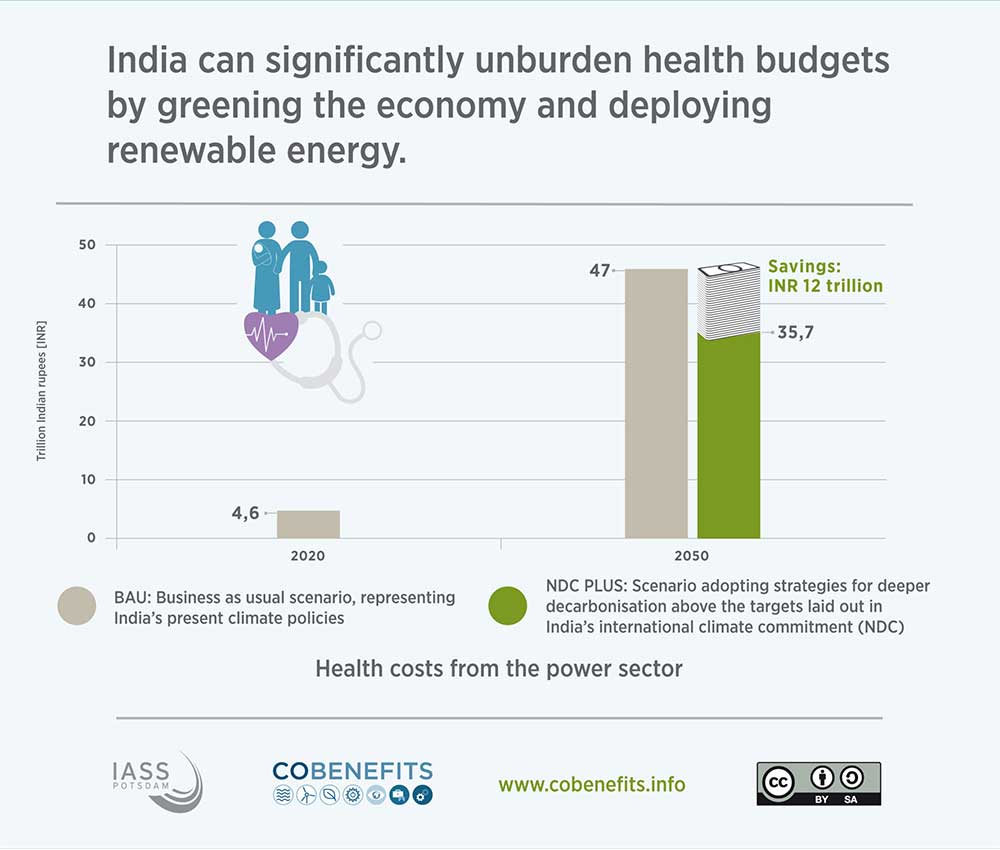