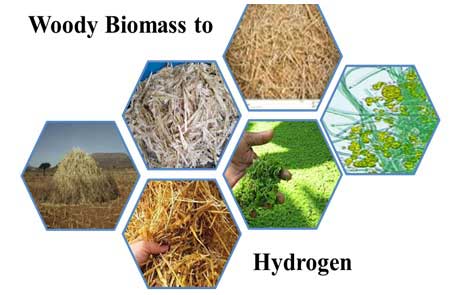 Energy plays a key role in socio-economic development of a nation and thus energy strategy of a nation targets at energy security as well as on energy efficiency. Current global energy demand is relying mostly on fossil fuels. Owing to the rising population, limited crude oil reserves due to fast depletion of conventional fossil fuel sources along with rising Green House Gas (GHG) emissions, there has been a global concern for energy security and environmental protection. Considering these concerns, clean energy production, especially from sustainable sources, has become the prime focus for national as well as for international policies. In this perspectives, hydrogen gained substantial global attention as the most promising fuel as the cleanest form of energy owing to its highest gravimetric energy density, ease of transportation, high efficiency of conversion to usable power, high conversion efficiency to power and on combustion generates clean water. 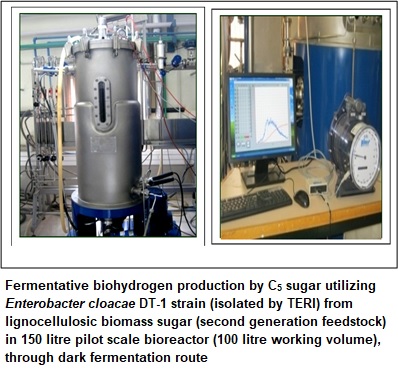 Considering food security issues, subsequent research explorations in this domain were focused on hydrogen production from lignocellulosic/woody biomass. Lignocellulosic biomass present in agricultural residues, grasses, hardwood, softwood, and is most abundant in nature and provide a wide avenue for use as non-feed competitive feedstock for clean fuel production. However, these biomass samples mainly composed of polymers of cellulose and hemicellulose (polymers of glucose (C6 sugar), xylose (C5 sugar)). Most of the microbes utilize glucose effectively. However, crux lies in the utilization of xylose (C5 sugar). Only those microbes having the potential for C5 and C6 sugar utilization can use lignocellulosic biomass as feedstock for biofuel production. Keeping this in mind, TERI researchers explored in isolation of the desired microbe that can utilize both C5 and C6 sugar for hydrogen production.

Further research explorations are in progress in this domain to fill the transition gaps to move this technology to demonstration/pre-commercialization scale. Presently cost is one of the great concerns and thus research explorations are in progress to reduce the overall cost of the process by utilizing the spent effluent of this process for the production of value-added products, in a biorefinery concept. Maturation of this technology will eventually contribute to substantial cost reduction of this process.