Reporting climate change from the Himalayas: The Best Stories from the Fellowship

The fellowship for Himalayan journalists was designed as a working experience to provide the knowhow, training, and practice in creating solutions-based, multimedia stories on climate change. Our goal was to open new conversations about reporting on the climate future of this region. The program charted an innovative path for young journalists to cover impacts, science, and responses amid growing climate awareness in the subcontinent. Here are some of the best outputs produced by the fellows, many of them reporting their first story on climate change, amidst the tough challenges posed by the COVID-19 pandemic.

The Bakarwals: A way of life under threat

"Our sheep are dying because of this heat", says Muhammad Anzar, a sheep rearer from Kashmir. As temperatures increase and rains disappear, the Gujjars and Bakarwals, the nomadic pastoral communities of Jammu and Kashmir, fear losing the vocation they have practiced for generations, and along with it a whole way of life.

A significant shift is being observed in the agricultural landscape of Kashmir as climate change impacts the Union Territory’s (UT) climatic conditions. With drier winters and dwindling water availability, Kashmir’s self-sufficiency on rice, the staple food of the UT is in peril. Farmers have begun shifting to apple cultivation subjecting the valley to increased food security threats, pesticide overuse, local apple species being lost to foreign ones and more. This story by Rayies Altaf, highlights how climate change impacts have begun affecting Kashmir’s food system.

"Make steps along the slope. Tame the running water, make it walk", says Bachhi Singh, an environmentalist from Nainital. As extreme rain batters the fields of small farmers year after year, many of them are learning, innovating and finding hope as they adapt to climate change.

Nainital: A Story of Hills, Lakes and Landslides

The beautiful hill city of Nainital has a historic relationship with landslides. Today, as the city faces the dual pressures of extreme rains and rampant construction, the fragile Ballia ravine in Nainital is eroding fast, risking the lives and habitats of local residents. Bahadur Singh, calls upon the government and citizens of Nainital to work together to safeguard this city from the impending risks of climate change.

In what is perhaps a sign of things to come, Nepal has experienced at least 24 to 30 glacial lake outburst floods in recent times. Kunja Shreshtha, gives us a peek into what it would look like if climate change reaches its tipping point.

The Missing Apples of Himachal Pradesh

Its the case of missing apples. As temperatures rise, Himachal Pradesh's apple produce has dropped by one-third in the last decade. What does it mean for the economy of the state, and the livelihood of its people?

More than 300 people were killed in 2020 in one of Nepal’s biggest landslides. Climate change has impacted rainfall patterns adversely and the people of Nepal have been at the receiving end. Is Nepal prepared on ground, to deal with rising number of climate disasters?

Greenhouse farming in Kashmir is yielding positive results, helping to increase production during harsh winter months and improving farmer incomes. With rising impacts of climate change, more needs to be done to spread awareness on greenhouse farming in the state.

Walk the Talk: 5 things to make your lifestyle sustainable

Soumya Prasad, an urban resident of Dehradun, uses solar energy, drives an electric car, grows her own vegetables, harvests rainwater, generates zero waste and believes she has enough clothes for a lifetime. “Listen to your inner voice. It will tell you what to be done”, she says.

Climate change has changed rainfall patterns in the Himalayan states, but thankfully it does rain still. Jitendra Singh highlights a do-it-yourself, low cost, plastic lined water tank that is helping a few enterprising farmers beat the water crisis head-on. If promoted widely, this could be a game changing solution for the water stressed Himalayan states.

Valley of Flowers: Don’t shut them for Himalayan shepherds

The Bhotiyas have grazed their sheep in the valleys of flowers in Uttarakhand for generations, but lately there have been restrictions on their movement, imposed in the name of conservation. As climate change threatens the rich biodiversity of these meadows, should the Bhotiyas and their knowledge be used to conserve this vital ecosystem, or should they be alienated?

The Birds of Nepal: How climate change is taking away their food and home

Hundreds of migratory birds come to Nepal for food and habitat. As temperatures fluctuate, they lose their sense of prediction, hence their ability to catch insects and sustain their young ones. Sonam Lama, puts together this rich visual story, calling out for greater conservation efforts by the government and communities to protect these birds from extinction.

Nardu glacier in Baspa basin in Himachal Pradesh is retreating continuously and this will directly impact the flow of rivers in the state and the livelihood of people living in this region. Shivam Sharma, catches up with scientists studying the Nardu glacier under the National Mission for Sustaining the Himalayan Ecosystem.

Living on the edge: The Mising community of Assam

The Paris Agreement, The Kyoto Protocol – these are mere words to children whose villages are being eaten away by the river Brahmaputra. Listen to the story of Podumi, who is staring at the possibility of her Mising community slowly vanishing due to repeated floods.

“Experts have found that millets have high resilience to climate variability and are much more adaptable to climate extremes. Furthermore, in terms of nutritional securuty millets offer far more protein than rice or similar crops,” says Yenten Namgay, Agricultural Officer, National Centre for Organic Agriculture, Bhutan. With an expected increase in the frequency of droughts due to climate change, millets- the staple diet of Lhops, the aboriginal inhabitants of southern Bhutan might be the climate-smart crop of the future. Watch Sherub Dori, report from Bhutan on millets and their advantage. 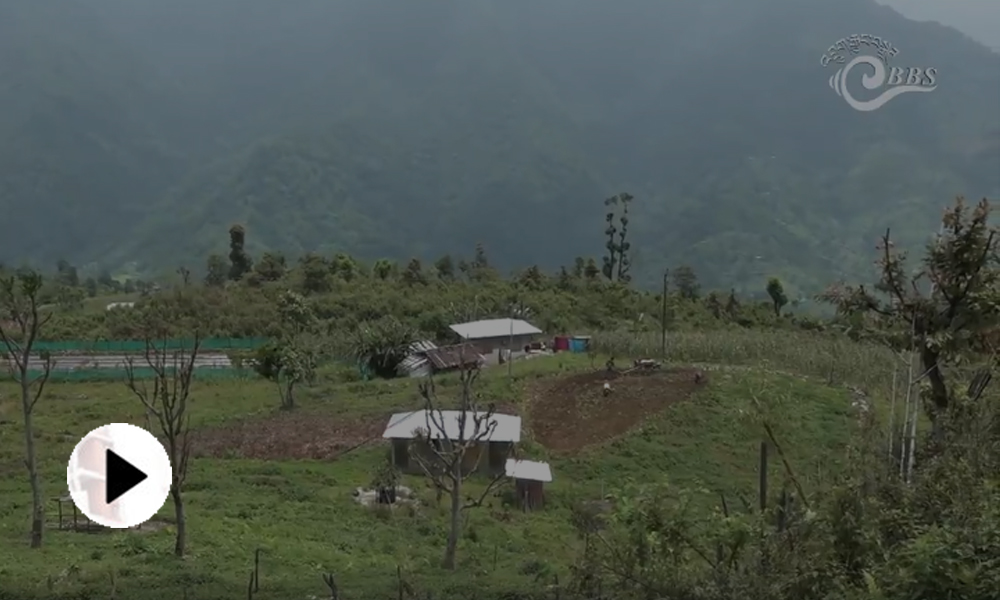 Climate Dialogues - Perspectives of farmers and pastoralists from the Himalayan region

Beyond the science and policy domains that climate change dialogues usually occupy, voices of marginalised and vulnerable often struggle to find any space. This first video is a series of two by Debarun Dutta, brings climate change impact discussions to the ground. Exploring insights from farmers and pastoralists of Tehri, the video attempt to bring to fore, voices of communities who are most affected by the climate crisis.

Almost 70% of agricultural work in India is done by women, yet their voices and perspectives have long been ignored in discussions around agriculture and climate change. This second video on ‘Climate Dialogues’ in a series of two by Debarun Dutta, highlights the efforts of women farmers in reviving traditional agricultural practices and farming of traditional crops like millet to enhance nutrition and food security in their region. By reverting back to coarse grains that are resilient to climate fluctuations, the video shares insights from women farmers of Himachal Pradesh.

“The number of houses built within the 50-square km area of the Kathmandu metropolitan city from the late 1990s until the last fiscal is 70,090, which is seven times more than the area’s capacity”, says Suraj Shakya, the chief architect of the Building Construction Permit Division of the local government. With growing housing density and increased use of carbon intensive building material, Nepal is faced with a huge challenge of meeting the targets of the Paris Agreement. While Green Architecture might emerge as a solution in the tussle between growth and sustainable development, the challenges are many, writes Asmita Khadka, in her article.

More than half of India’s total tea is produced by Assam. Additionally, it contributes to almost 17% of the global tea production. However, with rising temperature, unpredictable rainfall leading to growing water scarcity, tea production in Assam and north-east India is expected to fall drastically. As tea plants are highly susceptible to their external environments, any adverse changes in the climatic conditions around them significantly affect their yield and consequently the livelihoods of all those engaged in tea cultivation. Chandrani Sinha, explores how small tea cultivators are going back to traditional Vedic practices in an attempt to tackle the impacts of a changing climate.

As part of the Editorji’s campaign in the form of ‘Climate Change Awareness Week’, Vandita Sariya produced a collection of five short videos addressing different issues associated with climate change. From spreading awareness on the difference between weather and climate, to the link of climate change with food security, the videos interspersed with insights from TERI researchers address various facets of climate change.

The North East owing to its geography, and ecological sensitivity is highly vulnerable to climate change impacts. These impacts get further exacerbated due to the dependence of local communities on agriculture and similar sectors that are extremely climate sensitive. Building resilience of North East is then immensely crucial. This podcast by Trisanki Sakia with Dhriti Pathak, Research Associate in the Earth Science and Climate Change division of TERI, discusses the measures that have been adopted and the opportunities that exist to enhance North East India's resilience to climate change.

Farmer Samir Bordoloi is promoting an unconventional form of farming he has termed 'compassionate farming'. He is also building a network of "Green Commandos" - a group of young people who are learning similar principles of farming, promoting indigenous food and making farming aspirational again. Watch Trisanki Sakia's interview to learn more about Farmer Samir Bordoloi’s understanding of "compassionate farming" and its relevance in the growing space of sustainability.

Nepal in the 2015 Paris Agreement on climate change pledged that 20% of its vehicles would be electric by 2020, however this target is still far from being reached. As trucks, cars, vans and busses dominate the emissions from the transport sector, Yatri Motorcycles- an EV startup of e-motorcycles aims to push for dercabonising Nepal’s transport sector. Read this report by Aadesh Subedi to know more.

Climate Change: The Death Of Himalayan Butterflies Will Lead To Food Shortage

Butterflies like bees play a huge part in pollination and ensuring the balance of the food chain. Additionally, they are also key environmental indicators due to their sensitivity to changing climatic conditions. The rise in average temperature of the earth especially in the Himalayan regions of India has led to about 18 butterfly species living on the mountains to go to higher altitudes. Due to their intricate links with the food chain such changes in their average place elevation can have disastrous effects in the flowering season in turn ruining the entire food chain. Vishal Shukla, in his article expands on the issues of food security that arise out of butterflies getting displaced due to climate change.

Almost 90% of the households in Himachal Pradesh are covered under the Public Distribution System, but the food basket is largely filled through rice and wheat imported from neighbouring states. At a time when the farming communities of the state are bearing the brunt of climate change, a decline in farm income and deteriorating health, millets seem to be the best bet to arrest the slide. In his article on millets and their multifaced benefits including nutritional, food security, and resilience to climate change, Partik Kumar discusses about Himachal Pradesh’s need to adopt a holistic approach to revive the coarse grain.

"Changes in animal movement and migration as a result of habitat modification and climate change may therefore alter lifetime fitness of individuals in addition to biodiversity and ecosystem processes at regional and global scales," reports Ishan Pareek in his podcast detailing the ecological consequences of climate change on humans as the flora and fauna shifts north in search of cooler temperatures.

Man vs forest- In Uttarakhand

For more details on the Media Fellowship Programme, click here