Through successive consultations with its member companies and advice provided by the industry associations, TERI-BCSD developed the White Paper on "Corporate Action Plan on Climate Change". The White Paper brings out a clear definition of actions by business and industry, which will facilitate the development of specific policies and augment the implementation of the National Action Plan on Climate Change (NAPCC).

At the Inaugural Session of the World CEO Forum the Corporate Action Plan on Climate Change was tabled in the presence of Dr R K Pachauri, Director-General, TERI, HE Anne Marie Idrac, Minister of State for Foreign Trade, Government of France and the Chief Guest Shri Jairam Ramesh, Minister of State for Commerce, Industry, and Power, Government of India. Several dignitaries and over 150 CEOs from India and overseas were also present at the occasion.

Succeeding the first two corporate consultations, TERI-BCSD organized the third successful consultation – Inter-Ministry Meeting of the NAPCC Corporate White Paper - on 8 January 2009. This was the first time that eight select ministries came together to note the draft findings of the project. The draft findings provided information to the nodal ministries to chalk out a map for implementation of the NAPCC. The forum also facilitated a discussion with senior government representatives and TERI-BCSD member companies on the industry's role in the National Action Plan on Climate Change. Mr Shyam Saran, Special Envoy of Prime Minister on Climate Change, chaired the meeting. This white paper will be tabled at the World CEO Forum on 4 February 2009.

On 17 December 2008 in TERI, New Delhi, TERI BCSD India organised a consultation with corporates and select industry associations on the business role in the National Action Plan on Climate Change (NAPCC). This initiative titled: Growth and Prosperity in a Carbon Constrained World was launched in Mumbai on 29 September 2008 through a well-attended high profile corporate consultation. This was the second consultation where about 44 senior representatives from 30 organisations participated.

In 4 parallel break-away sessions, industry representatives discussed opportunities and implications of the 8 national missions of NAPCC for their businesses. The recommendations put forth by the participating corporates on each national mission will be incorporated to further fine tune the white paper to be submitted to the Prime Minister's Council on Climate Change as a Corporate Action Plan on Climate Change by February 2009.

Recognizing the urgency to generate awareness and build consensus on the climate change agenda in India, TERI-BCSD through a well-attended high profile corporate consultation titled: "Growth and Prosperity in a Carbon Constrained World" in Mumbai on 29 September 2008 launched a major initiative to bring out a clear definition of actions by business and industry, which will facilitate the development of specific policies and augment the implementation of the National Action Plan on Climate Change (NAPCC). About 70 senior industry representatives including CEOs from all relevant sectors namely: steel, chemicals, paper and pulp, metals and minerals, oil and gas, cement, power, pharmaceuticals, ICT and finance put forward their ideas and success stories to the industry led task forces to chalk out an action plan for the business role in NAPCC. A need to develop a multi-disciplinary workforce, including industry, academicians, government and media, to address and act on the implications of climate change on businesses today, came out strongly in the dialogue. The goal of this TERI-BCSD initiative is to submit a white paper to the Prime Minister's council by December 2008, which may well be identified as the corporate action plan for the NAPCC. 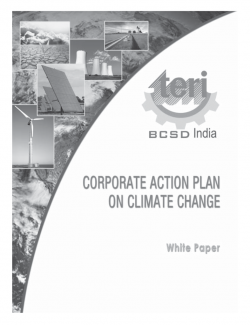