Shifting to cycling can result in an annual savings of up to 1.6% of India’s GDP

Cycling is one of the most sustainable modes of transportation. It has numerous benefits in the form of zero dependence on fossil fuels, zero emissions and pollution, health benefits from increased physical activity, besides being an affordable means of mobility for low-income households. For these individuals, especially in rural areas, it improves access to jobs, education, and health facilities. Additionally, by addressing low female school enrolment, it has shown immense potential to promote gender empowerment. However, despite its many benefits, bicycles in India are increasingly being used by only captive users, who do not have access to any other form of mobility. Resultantly, India is witnessing a very slow growth in bicycle ownership and a decline in the use of bicycles as a form of mobility (TERI, 2014). In the period between 2001 and 2011, the share of bicycle-owning households has only increased by 1%. The corresponding share in rural areas has increased by 3.4%, whereas in urban areas it has declined by 4.1%. Rising income levels, absence of safe cycling infrastructure, and increased affordability of motorized vehicles (especially two-wheelers) are the major factors that have led to a decline in the share of bicycles. Specifically, in cities short-distance trips which can be undertaken by bicycles are now being made by cars and two-wheelers instead.

This increasing motorization in urban and rural areas has given rise to many negative externalities such as dependence on fossil fuels, GHG emissions, congestion, pollution and the associated health impacts. In order to minimize the costs associated with these externalities, the current and future projected travel demand needs to be served by sustainable modes of transportation like cycling.

To promote the widespread use of bicycles, dedicated initiatives such as tax concessions for low-income individuals, construction of adequate and safe cycling infrastructure, and measures to reduce the use of private vehicles such as congestion and parking pricing and awareness campaigns to highlight the benefits of cycling need to be undertaken. These measures should be implemented to retain the existing high share of cyclists and to motivate a shift among those who currently rely on private motor vehicles even for short distances. In order to encourage such measures the benefits of cycling for the economy, the environment, and society have to be estimated. To this end, the study undertakes a comprehensive review of the internationally accepted methodologies used to quantify the benefits associated with cycling. Further, by employing these methodologies the study quantifies the benefits of cycling in India.

The benefits that directly accrue to individuals due to the uptake of cycling are defined as direct benefits. In the study, personal fuel savings, health benefits due to increased physical activity, reduced air pollution, and travel-time savings by marginal unskilled workers are quantified. The benefits that accrue to society due to a modal shift towards cycling are defined as indirect benefits - energy savings (toe) and reduced CO2 emissions. In this study, it is estimated that if bicycles were to substitute the two- and four-wheelers used for short-distance trips, it can result in an annual benefit of INR 1.8 trillion, which is equivalent to 1.6% of India’s annual GDP for 2015–16.

These benefits can be realized by providing safe cycling infrastructure and conducting awareness campaigns to highlight the various benefits of cycling and by dispelling the notion of bicycles as the poor person’s mode of transport. Additionally, cities should plan city-wide bicycle-sharing schemes instead of only focusing on specific locations. In order to increase the share of cycling among choice users, the aforementioned measures have to be supplemented by regulations on the use of private motorized vehicles, such as congestion and parking pricing and pollution tax.

To increase bicycle access among low-income households, the provision of microfinancing options and implementation of cycle-distribution schemes should be undertaken. Given that at present the expenditure on bicycles accounts for a large share of household income, it is important to make bicycles more affordable for low-income households. This could be achieved by reducing the GST rate on bicycles costing less than INR 5,000 from the existing 12% to the lowest rate of 5%. It is also recomended that a 'Bicycle Development Council' should be established for growth and development of the sector in India. 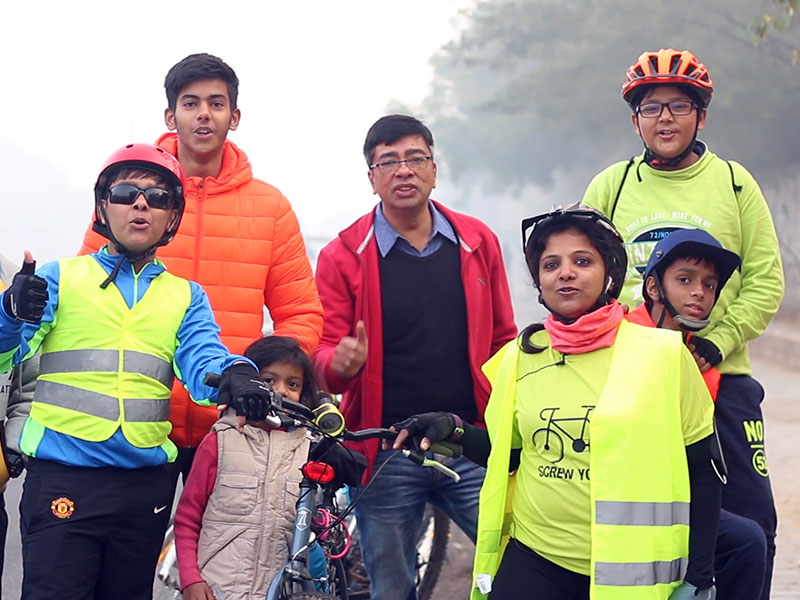 The Cycle of Life
Videos

Tags
Carbon footprint
Public Health
Road transport
Transport
This block is broken or missing. You may be missing content or you might need to enable the original module.