A major concern of air pollution in Delhi is the road dust that is generated as suspended particles during cleaning the roads. Traditionally, sweeping of roads is done manually, which causes the dust to remain floating in the air for some time, thus increasing the amount of suspended particulate matter (SPM) in the air.

To combat this, South Delhi Municipal Corporation, one of the three zones of the Municipal Corporation of Delhi, has deployed mechanized street sweeping mechanism. These mechanical road sweepers (MRS) have rotating brushes that are used to keep roads, pavements and other hard surfaces clean and free from debris. The machine acts like a big vacuum cleaner and has the capacity to intake large-size plastics and other waste, which gets collected in a bin mounted on top of a van. 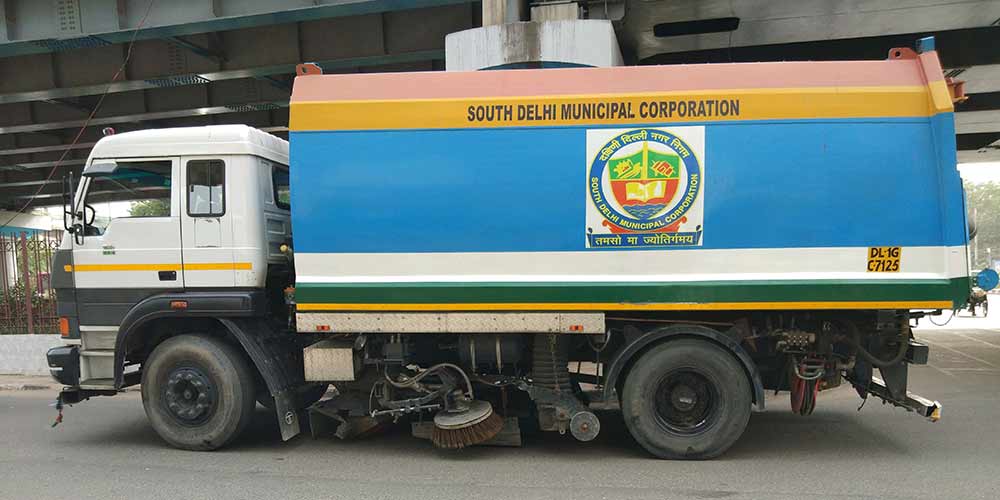 SDMC covers an area of about 250 km2 and is divided into four zones South, Central, West and Nazafgarh. SDMC has deployed a total of 12 such trucks equally divided among its zones, that is three in each, which work in two shifts daily - 06:00 am to 2:00 pm and 08:00 pm to 04:00 am. SDMC presently tracks all its vehicles through GPS tools and monitors their functioning.

With an aim to identify further gaps in current operational mechanism and help SDMC to increase the effectiveness and stretch of MRS machines, The Energy and Resources Institute has been engaged by the body to provide independent assessment. To this effect, TERI has deployed four auditors, one in each zone to monitor the operations of trucks in both day and night shifts. The number of samples to be audited has been selected for 90 percent confidence level and an acceptable margin of error as 10 percent.

The proposed assessment is primarily aimed at investigating how well the existing mechanized street sweeping system is working, to check all the activities based on common protocols and methodology, and periodic analysis of the efficacy of the process of street sweeping.

This audit is the first-of-its-kind in India and would help SDMC to create a database of MRS operations. It will not only improve the technical abilities of staff and employees engaged in MRS operations, but will also help SDMC in optimal utilisation of its resources. The audit started in July 2018 and will continue till January 2019.

Themes
Waste
Cities
Tags
Waste management
This block is broken or missing. You may be missing content or you might need to enable the original module.