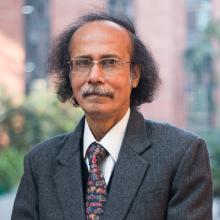 A Doctorate in Economics (1991) from the State University of New York, Stony Brook, New York, Dr S K Sarkar is working as Director, Water Resources Division, TERI since September 2014. He is responsible for carrying forward research agenda in the infrastructure sector, especially in the area of regulatory policy, energy reforms, water resources management, urban system infrastructure, and sustainable development including climate change. During 1998 till 2003 Dr Sarkar worked as Senior Fellow, TERI, and during 2005-2007 as Director, Division of Regulatory Studies and Governance in TERI.

Dr Sarkar worked as Secretary to the Government of India in the Ministry of Water Resources during 2013, in the Department of Personnel and Training during 2013-14 & 2007-2013, and Ministry of Finance (Department of Economic Affairs) during 1994-97. Prior to this, Dr Sarkar was with the environment regulatory authority, Government of West Bengal, and was responsible for the sustainable development in the State (2003-05). Also, worked as consultant with the Asian Development Bank (1998) and with the World Bank/PPIAF (Public private Infrastructure Advisory Facility) during 2003-04.

During 1998-2003, Dr Sarkar was with the TERI (The Energy and Resources Institute), New Delhi, as Senior Fellow, and worked on various projects concerning energy reforms, environmental infrastructure, natural resources management, and regulatory policy issues in India, Vietnam, Philippines, and other South Asian Countries. He was actively involved in the capacity building work of the South Asia Forum for Infrastructure Regulation (SAFIR), a Forum assisted (since 1999) by the World Bank and PPIAF, and is a regular resource persons for this continuing program.

Dr Sarkar has got several publications to his credit in national dailies, journals (national and international), and in the form of mimeograph. Authored and edited books on infrastructure issues. Presented a number of important papers in several conferences. He had also organized several training program in India and abroad.

He taught a course on "Public Policy" in the Kabul University (2007), Afghanistan.