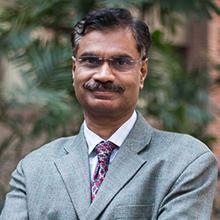 In TERI he works on policy issues related to natural resources, including land, water and minerals and mentors TERI colleagues in natural resource related sectors, and advises on TERI project design and implementation strategies, including policy aspects. He also leads the TERI-wide initiative on SDGs and Policy Coordination to ensure that research on SDGs and related policy across the Institute is better coordinated. He also convenes the meetings of the Sub-Committee of Distinguished Fellows constituted to improve the policy focus of TERI. He has authored, along with colleagues in TERI, policy papers on mineral resources, environmental governance, water resources etc.

He is also the Leader of the Food and Land Use (FOLU) Coalition India programme , which is being implemented since 2019 by a consortium of four institutions, namely The Energy and Resources Institute(TERI), the World Resources Institute (WRI), the Council for Energy, Environment and Water (CEEW) and the Indian Institute of Management-Ahmedabad (IIM-A). The FOLU Coalition work in India focuses on increasing the sustainability of Indian agriculture and improving the nutritional status of India through better food production and waste reduction practices.

In addition to his work in TERI:

He is a Member since 2015 of the United Nations' International Resource Panel (IRP) which considers issues relating to governance of resources and poverty and prepares science -based policy related reports on natural resource management, resource use efficiency and environmental impacts of resource use. He is a contributing author to the 2019 IRP Report “Mineral Resource Governance" and a member of the IRP Working Group on “Socio-economic implications of Resource efficiency" and the IRP Working Group on the “Role of Resources in Environmental Displacement and Migration". He is also a Member of the IRP Working Group on 'Finance for Mineral Extraction for Sustainable Development'.

He is a Contributing Author to the Routledge Handbook of the Extractive Industries and Sustainable Development (Edited by Natalia Yakovleva and Edmund Nickless) (2022).

In his earlier career in the Government, S Vijay Kumar was a member of the Indian Administrative Service and has held District, Divisional and State level positions dealing with land, personnel and police administration. In the Central Govt, he has been Director, National Wastelands Development Mission, Ministry of Environment and Forest, 1986-91; Joint Secretary in charge of the Govt's flagship programme, the Prime Ministers Rural Roads programme (called PMGSY), 2002-05; Additional Secretary and Secretary, Ministry of Mines 2008-11, and Secretary Ministry of Rural Development 2012-13.

S Vijay Kumar's notable achievements in his stints in the Government include: