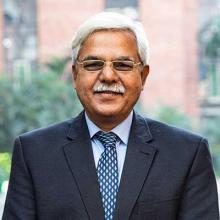 Shri Rajani Ranjan Rashmi is an officer of Indian Administrative Service (1983) batch. He retired as Chief Secretary, Government of Manipur in 2018. He was India's principal negotiator for climate change negotiations under the UN Framework Convention on Climate Change for several years and was part of climate change policy-making in India in the run-up to and after the Paris Agreement. As Special Secretary in the Ministry of Environment, Forest & Climate Change in the Government of India, he was closely associated with formulation and implementation of policies relating to Climate Change, Pollution, Montreal Protocol on ODS, and Environmental Clearances, besides being the Project Director of Green India Mission.

Besides his work in the field of environment, Shri Rashmi has served as a trade negotiator and public administrator. He has served as Adviser in India's Mission to European Union in Brussels (2001-2005) and as Additional Secretary in the Ministry of Commerce & Industry from 2014-16.

In the state government of Manipur, he was Finance Secretary for almost 8 years in various stints. In 2008, he was awarded the Prime Minister's Award for Excellence in Public Administration for his contribution to management of finances in the state.

Currently, he is Distinguished Fellow in the Centre for Global Environmental Research in TERI where he works on areas relating to climate change, mitigation and adaptation strategies, carbon markets, and related issues. In 2018-19, he served on the Sub Committee of the Ministry of Finance on Climate Finance. He is a Member of the Technical Advisory Body of the International Civil Aviation Organisation (ICAO). He is associated, in advisory capacity, with several other organisations such as the NAFCONS, the Consultancy wing of the NABARD on international climate business and the Network for Certification and Conservation of Forests (NCCF). He writes extensively on climate change issues in newspapers and journals.

Shri Rashmi is alumnus of Patna University and a management graduate from the Free University (Vriet Universitiet) of Brussels.