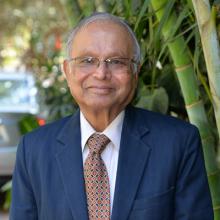 Mr Dasgupta, an alumnus of Delhi University serves as Distinguished Fellow and Director and has been leading TERI's Southern Regional Centre in Bengaluru, since 2005.

Mr Dasgupta retired from the IAS in 2000 and was appointed member of Telecom Disputes Settlement and Appellate Tribunal (TDSAT) from 2000-2003.

He is Chairman of the Board of Apprenticeship Training, Southern Region in an honorary capacity, and Member, Board of Directors of Ed.CIL, a public sector educational consultancy undertaking of the Ministry of Human Resources Development, Government of India.