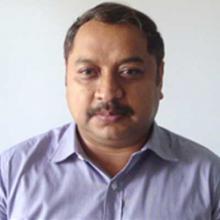 Dr Dipankar Saharia has been actively involved in facilitating the development of the TERI North-Eastern Regional Centre. He was with TERI in 1999 before which he was with the Government of Assam as an officer of the Assam Civil Service. He held the positions of Assistant Commissioner and later Officer on Special Duty, personnel department and science & technology department, Government of Assam. Dr Saharia was also with TERI from 1995 to 1996 working in the Tissue Culture Pilot Project (now MTP) and TERI NE Centre.

Dr Saharia has a Masters in science and Ph.D from Gauhati University. His expertise lies in the areas of biotechnology, natural resource management and rural development where he has undertaken several projects and studies in the fields of watershed management, production and demonstration of quality planting material, and biofuels. He has been the PI of several mission mode projects for the northeastern region, including Department of Biotechnology (DBT) Mission for Quality Planting Material Production and Utilization for the North East, Jatropha Micro Mission and DNA Club (DBT’s Natural Resource Awareness Programme Club) in Assam.