Youth have understood the urgency of climate crisis, Ursula von der Leyen, President of the European Commission, at TERI Gram 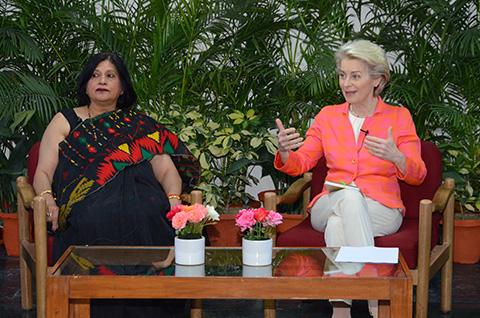 “We have one chance; that is to cut emissions, go into clean, green renewable energies, limit waste, look into circular economy. We are deeply convinced that this is our new growth model.”

New Delhi, April 24, 2022: Underscoring the need to join forces to combat climate change, HE Ursula von der Leyen, President of the European Commission, asserted the need to work together to create a green, sustainable and equitable future during her interaction with youth at TERI GRAM on the first day of her visit to India.

Climate change and biodiversity loss are at the top of the political agenda of the European Union (EU) and India. Observing that the young should raise their voice for climate action, the President said, “Youth are the advocates to fight climate change as well as to fight for the planet. But they are also the ones who develop solutions.”

Young people have fully understood the urgency of the climate crisis. And they are doing something about it. From living more sustainable lifestyles to making their voices heard on the street and advocating for greener policies, young people are at the heart of the solution. So make your voices heard," the President added.

Highlighting the long-standing partnership between EU and India, the President commended India’s ambitious renewable energy goals announced at COP26. “There is a lot of untapped potential between the European Union and India, we have a lot in common. And joining forces, we can do so much together for the benefit of our people but also for the benefit of our climate and our planet.”

We share the idea that we need to look into solar energy, wind energy, biomass, hydropower, green hydrogen, and geo thermal. These are the ingredients for success for the economy, for the benefit of the people, and the protection of our climate and environment. Protecting the climate and environment has a lot to do with innovation. With innovation the world takes the right direction in cutting emissions and protecting the environment and for that we need clean innovative technologies,” she said.

Observing that women leadership is crucial for inclusive and environmentally sensitive decision –making, Dr Vibha Dhawan, Director General, TERI, said in her welcome address, “Engaging with young people on matters concerning security, climate change and public policy is important to promote youth leadership along with global citizenship for our common future. We are extremely honoured and delighted that this intergenerational dialogue is taking place involving a prominent woman leader and our future generation.” After the discussion with the youth, the President planted a sapling at the TERI Gram campus and visited the TERI-Deakin Nano-Biotechnology Centre. TERI and the EU have a long history of joint projects supporting the green transition. The EU through its Research and Innovation Programme ‘Horizon 2020’ has funded several projects (investing close to €20 million) with TERI’s participation, focused on climate change (e.g. ENGAGE & CD-LINKS) and water (e.g. PAVITRA GANGA).

The youth participating in the discussion were selected from a large group of participants in the annual Youth Climate Conclave, which is organised annually under the Strategic Partnership for Implementation of the Paris Agreement (SPIPA) project by TERI, GIZ India, CEEW and the EU Delegation to India. The Ministry of Environment, Forest and Climate Change (MOEFCC) is the nodal Ministry for the initiative. The Youth Climate Conclave seeks to engage in a positive and proactive way with the youth in science-based discussions about the most relevant climate change issues. A few Indian Erasmus students also participated in the discussion. For last two years, India has been the top recipient of the prestigious Erasmus Mundus scholarships. There are over 6,000 Indian Erasmus Mundus scholars who have studied in Europe under this programme.

Cooperation between TERI and the EU

The cooperation between TERI and the EU goes long back, with many joint projects funded under the EU Framework Research and Innovation Programme across diverse areas, such as climate action, resource efficiency and circular economy, smart and sustainable urbanisation.

A recurring yearly event in the EU’s cooperation with TERI is the EU’s participation in TERI’s flagship event World Sustainable Development Summit (WSDS). In addition, TERI and EU delegation to India have jointly organised three Youth Climate Conclaves, in close cooperation with the Indian Ministry of Environment Forestry and Climate Change.

The Nanobiotechnology Centre and associated Research Groups (working on Nanotechnology-based Agri products and Mycorrhiza Research) of the Sustainable Agriculture Programme at TERI have been involved in a number of bilateral and multilateral projects in the past 10 years. The centre is a member of EU Nanonetwork as well as the International Initiative for Safe and Sustainable Nanoproducts (INISS-Nano). Through the centre’s DTDRNA-network across continents program, the centre is involved in capacity building in Nanoscience, partnering with Portugal, Spain and Austria on this network. The EU and TERI have collaborated in several projects in the last decade under the EU Research and Innovation Framework Programme and recently under the newly launched Horizon Europe Programme (2021-2027).

About TERI Gram: TERI GRAM houses state-of-the-art facilities for developing green technologies with a clear vision of a residence-building for a sustainable habitat. The 36-hectare TERI campus at Gual Pahari, Gurgaon, is a lush green habitat, 30 km south of Delhi, and built as a model training complex. The building demonstrates efficient utilization of clean and renewable energy, integrated use of both natural resources and optimised waste management. This 30-room training hostel boasts of conference facilities for 100 people, and is unique as it enjoys complete independence from the city's grid system.

About the European Union: The EU, which consists of 27 countries, has the world's second largest economy and its third largest population, after China and India. Though richly diverse, the countries that make up the EU (its 'Member States') are all committed to the same basic values: peace, democracy, the rule of law and respect for human rights. By creating a frontier-free single market and a single currency (the euro) which has been adopted by 19 Member States, the EU has given a significant boost to trade and employment.

EU-India relations: The EU and India have worked together for 6 decades to reduce poverty, prevent disasters, expand trade, fight climate change and biodiversity loss, promote green and digital transition, enhance security around the world and promote joint research in energy, health, agriculture and many other fields of mutual interest.

Tags
Climate change
Sustainable development
Environment education
Themes
Climate
Environment
This block is broken or missing. You may be missing content or you might need to enable the original module.