Transparency on climate finance and enhancement of support are areas to build on in the future, key COP negotiators at TERI high-level discussion 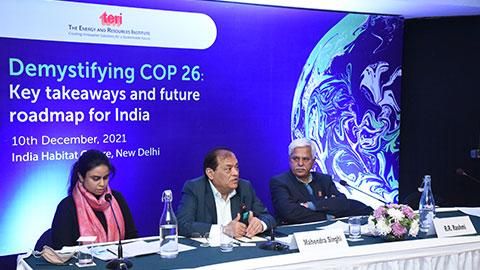 December 10, New Delhi: India managed to successfully place its concerns on board, including transparency on climate finance as well as long-term financial support from developed countries at the recently concluded COP26, observed key members of the Indian delegation during a high-level discussion organised by The Energy and Resources Institute (TERI) on Friday, December 10, at New Delhi.

The discussion during the event titled, 'Demystifying COP26: Key takeaways and future roadmap for India', held a month after the conference, was attended by negotiating members from the Union Ministry of Finance, Ministry of External Affairs, as well as the Ministry of Environment, Forest and Climate Change.

Delivering the welcome address Dr. Vibha Dhawan, Director General, TERI, said, "This is the decade of action. We need to make the best of this window to keep the planet habitable." Dr Dhawan pointed out that the targets of net-zero carbon emissions, technology development and capacity building should go together. "All further growth has to be sustainable. Business as usual is not going to work any longer," she observed.

Taking part in the discussions, Ms. Chandni Raina, Economic Adviser, Ministry of Finance, said that at COP26, India had managed to "claw back" from 2019 [COP25] when items related to finance were not concluded. "The two most important things for us was transparency on the USD 100 billion goal, and enhanced financial support from developed countries for a period of time," observed Ms Raina. A technical, yet, another important development, is the acceptance that there is no multi-nationally agreed definition of climate finance, she noted. "There is acceptance that USD 100 billion has not come through. If developing countries are to be more ambitious, it can only be on the back of financing," added Ms Raina.

The Intergovernmental Panel on Climate Change (IPCC) report on Nationally-Determined Contributions (NDCs) had changed the momentum at COP26, noted Mr. Srinivas Gotru, Joint Secretary, Ministry of External Affairs. "The expectations were on four issues: enhancement of NDCs, net-zero, global methane pledge, and coal," said Mr Gotru. Observing that give-and-take is part of the negotiating process, Mr Gotru added, "There is stability in terms of policy direction and renewable energy goals. We have been able to give a sense of certainty to the domestic industry, and managed to hold our ground, especially on Article 6 [on carbon markets]."

Industry representative Mr. Mahendra Singhi, MD and CEO, Dalmia Cement (Bharat) Ltd, said a key takeaway from COP26 was that "countries could announce their own breakthrough agendas such as India's One Sun One World One Grid initiative". Mr Singhi also noted, "Ninety per cent of the global economy has signed for net-zero carbon."

Mr. Manjeev Singh Puri, former diplomat and Distinguished Fellow, TERI, underscored that "climate change is not a costless process... but will the benefits outweigh the costs? Governments take calls on that". Emphasising the heydays of carbon were over, Mr Puri asserted the need for India to be a part of the change. Questioning whether the discourse on net-zero led to increased momentum at COP26, Mr. RR Rashmi, Distinguished Fellow and former negotiator, opined the discourse cannot change "unless we are able to change the ambition in the short term." "A key outcome was India was able to protect its position as per flexibility," noted Mr Rashmi. 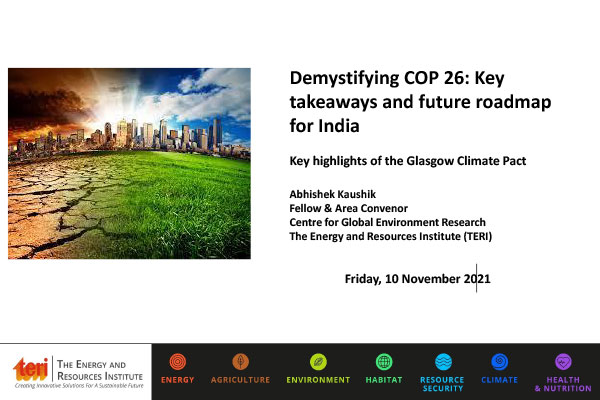 Mr. Abhishek Kaushik, Area Convenor, TERI, gave a presentation on the outcomes of COP26, highlighting the various mechanisms under the Paris Rulebook, the mandates on defining climate finance, adaptation and loss and damage.

Tags
Climate change
Climate action
Themes
Climate
Environment
This block is broken or missing. You may be missing content or you might need to enable the original module.