TERI's outreach on ‘Challenges and Opportunities from COP27: Experts sum up key takeaways’ 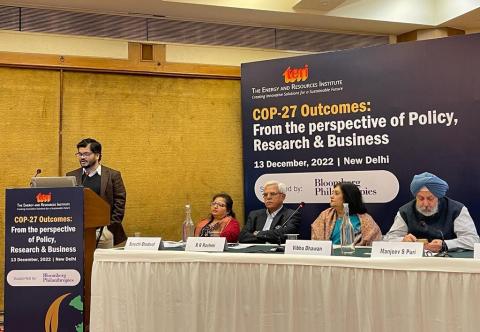 New Delhi, December 13, 2022: As the dust on the world’s largest global negotiations for climate action- the Conference of Parties (COP27) settled, The Energy and Resources Institute (TERI) with support from Bloomberg Philanthropies organised a session on “COP-27 Outcomes: From the perspectives of Policy, Research & Businesses” summing up views and setting expectations from a wide range of experts from the government, think-tanks and the industry, on Tuesday in New Delhi.

Dr Vibha Dhawan, Director General, TERI highlighted the core contributions of the COP besides stressing on the fact that while developments with regard to certain key discussion agendas of the COP did happen, the implementation part is yet to be visible. There are various stakeholders including the industry who have given their commitments and the next couple of years may indicate the progress with regard to the actual work that is being carried out. While there is no doubt that the institutionalisation of the loss and damage fund was a much welcome outcome at COP27, she underscored the insufficient and inefficient transfer of funds for climate action to the developing world.

Dr Manish Kumar Shrivastava, Senior Fellow and Expert on climate policy related matters, mentioned the challenges due to the looming energy crisis, uncertain geopolitical scenario and the lack of much needed diplomatic capital responsible for the level of ambitions at the COP 27. Ideally the previous presidency of UK and the current presidency of Egypt hold the responsibility for setting the global agendas reason for many decisions being considered for the next COP. For a COP that was touted to be an Africa COP where the outgoing presidency wanted to revive an adaptation plan, the progress on related issues has been very slow including developments on the GGA.

Chairing the high-level session on COP27 Outcomes, Mr Manjeev Singh Puri, Former Ambassador and Distinguished Fellow, TERI, highlighted the role of various stakeholders, the government as well as the critical role that the youth normally plays in catalysing climate action and implementation. He iterated that the COP is a platform for climate change negotiations and global burden sharing and every effort matters as climate change is real, is here, and it is affecting us.

Speaking on India’s role at COP27 and the Long-Term Low Emission Development Strategy (LT-LEDS), Mr Ajay Raghava, Joint Director, Ministry of Environment Forest and Climate Change, Government of India noted, “Transparency has been the core of the Paris Agreement. Finance, as we understand it, has always been slow to move not only in terms of the real finance but also for the finance relative to the capacity building initiatives for transparency.” In the agendas around agriculture, Mr Raghava noted that the Indian delegation was sharp in defining adaptation as the priority for farmers. On India launching its LT-LEDS, Mr Raghava stressed that “India has given a very progressive long term strategy report that was long awaited and we have very clearly told about what are the transitions, which are the different sectors which we would like to work on, for example, the electricity sector, transport sector, CCUS, the forestry, and the finance sector.”

While one might get a sense that the COP was very slow at achieving outcomes, “every COP has a glass half full or half empty story depending on how one looks at it,” observed Mr RR Rashmi, Distinguished Fellow, TERI, chairing the technical session on COP27 outcomes. The COP did have a number of issues which were work-in-progress including the Global Goal on Adaptation and the mitigation work programme. Mr Rashmi emphasized that “Global climate change is a serious problem and we need to apply ourselves with the maximum degree of earnestness and effort,” he added.

As the governments across the world sat together to negotiate key issues on climate action, global businesses too made a space for themselves at COP to deliberate, collaborate and chart out paths for an urgent future with net-zero emissions. Outlining the perspective of Indian industry from COP27 Mr Mahendra Singhi, Managing Director and CEO, Dalmia Cement (Bharat) Limited said, “Industry and business are benefitting by the interactions taking place at platforms like the COP." On the launch of the breakthrough agenda, Mr Singhi noted that businesses need to understand that the adoption of many green technologies might not be economical in the short-term but it is the mid-term and the long-term view that they should be eyeing. “We as businesses and human beings are looking at the climate crisis in a different way. The cost of inaction is very high... business will have to take lead and then take those action,” he added.

Though the movement on adaptation has been relatively slow in deliberations and negotiations on climate action when compared to mitigation, “The issue as such has been in existence since we started talking about climate change,” observed Ms Suruchi Bhadwal, Director, Earth Science and Climate Change division, TERI. The Global Goal on Adaptation, the Global Stocktake, and the Biennial Transparency Report are the three parallel streams where reporting on adaptation is likely to be carried out post COP27, which may assist in the understanding of the work in progress and the path upto COP28 in Dubai, noted Ms Bhadwal.

COP27 marked a historic decision with the development of the loss and damage fund for the most vulnerable countries, however, the modalities of the fund including its operationalization need to be worked on, added Ms Bhadwal.

COP27 finally saw oceans finding a mention in specific paragraphs in the decisions made at Sharm el-Sheikh. Speaking on why this is significant, especially with regard to climate governance, Dr Shailly Kedia, Senior Fellow and Associate Director, TERI said, “25% of the annual emissions of CO2 are absorbed by oceans and, therefore, oceans are very critical when it comes to alleviating the impacts of climate change on the planet.” There is a need to move beyond a dialogue-based approach to a more concrete institutional based approach where decisions are taken but for that intergovernmental organisations such as UN will have to be further empowered, added Dr Kedia.

Speaking on the developments made on Article 6 and international carbon markets at COP27 in Sharm el-Sheikh, Mr K Umamaheshwaran, consultant, TERI, noted that the overall outcomes remained modest with the work program now shifted to COP28.

The voluntary markets are now developing transparency and integrity, added Mr Umamaheshwaran at the session.

Tags
Climate change
Climate agreements
Climate finance
Themes
Climate
Environment
Energy
This block is broken or missing. You may be missing content or you might need to enable the original module.