TERI along with the World Adaptation Science Programme (WASP) will be co-hosting the Adaptation Futures Conference virtually from October 4 – 8, 2021 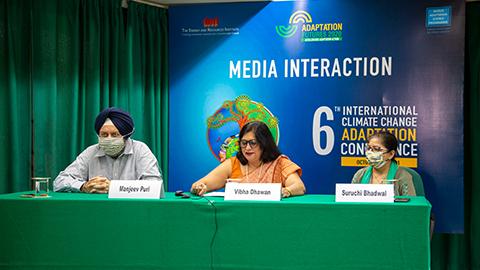 New Delhi, 29th September, 2021: The Energy and Resources Institute (TERI) on Wednesday held an in-person Press Conference as a pre-event to the Adaptation Futures Conference scheduled from October 4 – 8, 2021. The Press Conference had Dr. Vibha Dhawan, Director General, TERI welcome the press and media representatives. Thanking them for their presence and speaking at the occasion, she said, "We need to adapt to the risks of the climate, a large part of which we are already experiencing. India is highly vulnerable and exposed to the risks of climate change. Adaptation has to be part of our planning."

Earlier during the day, at the Second Edition of the Youth Climate Conclave, a part of the Adaptation Futures Conference, Sh. Bhupender Yadav, Hon'ble Union Minister for Environment, Forest and Climate Change, said, "Across the globe the young are considered the agents of social transformation. Therefore, the youth of today can play a very crucial role in deciding the course of our planet. We should learn to use and produce in sustainable ways to reverse the harms we have inflicted on the planet."

Ms. Suruchi Bhadwal, Director, Earth Science and Climate Change Division gave a presentation on the Adaptation Futures Conference. Highlighting the urgency for the need to recognize and act on climate change adaptation, she emphasized "Adaptation is a necessity and not a choice for all countries. As a large developing country with a large number of people depending on climate sensitive sources for their livelihoods, India needs to take cognizance and respond to the risks related to climate change."

Mr. Manjeev Singh Puri, Former Diplomat and Distinguished Fellow, TERI expanded on how the opportune timing of the conference both in light of the run up to COP26 in Glasgow and the striking commentary of IPCC’s 2021 report on the need for immediate and ambitious climate action. Speaking at the Press Conference, he remarked "Adaptation is an absolute imperative for climate change and needs to be a priority in the global efforts towards climate action."

Adding to Mr. Puri’s comments on the importance of the conference, Dr. Anand Patwardhan, Professor, University of Maryland and Chair, Science Committee, Adaptation Futures who joined the Press Conference virtually, said "For us to build resilience and grapple with accelerating impacts of climate change through adaptation, we need to- act now, together and at scale."

The floor was then opened for the press and media representatives to interact with the experts to better understand the discussions around adaptation and its various facets that the Adaptation Futures Conference aims to explore. This was followed by high-tea that further aimed to facilitate informal interaction between the media and TERI experts.

As part of the Adaptation Futures Conference, TERI is also hosting the 2nd edition of the Youth Climate Conclave from September 29 to October 1, 2021 to engage and enhance youth participation in discussions on climate action and adaptation.

Tags
Adaptive capacity
Climate adaptation
Themes
Climate
This block is broken or missing. You may be missing content or you might need to enable the original module.