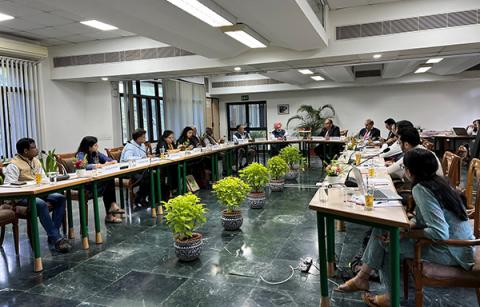 New Delhi, October 6, 2022: Emphasis on a holistic approach to climate action encompassing the principles of sustainable development will be a key area of focus at the upcoming COP27 in Sharm el-Sheikh said Dr Mahmoud Mohieldin, UN Climate Change High-Level Champion for the UNFCCC COP27 during an interaction with researchers at the field station of The Energy and Resources Institute (TERI) at Gwal Pahari on Thursday.

Dr Mohieldin underscored the need to place sustainable development as a core issue in climate action, particularly since it has been sidelined from the climate agenda. “The issue of sustainability has been, to some extent, hijacked in terms of priorities by some of the advanced economies. They reduced sustainability to mean only climate action, or they took it from a very narrow perspective to mean only decarbonisation and dealing with emissions,” observed Dr Mohieldin.

While decarbonisation continues to be a pressing issue, the UN Climate Change High-Level Champion asserted that developing economies need to address climate action efforts through a more holistic approach. “That holistic approach doesn’t just mean getting the Paris Agreement operationalized… but to put it in terms of the sustainable development agenda which means fighting poverty, getting investment in human capital properly, health and education; there is no use of climate action effort that would result in more poverty or more unemployment,” he added.

Addressing the issue of climate finance for developing countries and the promise of USD 100 billion for climate action from developed countries which continues to be unfulfilled, Dr Mohieldin said while the commitment is a moral issue, developing countries need to be innovative in their approach to climate finance. “We still insist on that (USD 100 billion) as it is very important as a token of trust,” he added. Dr Mohieldin lauded India’s efforts in addressing the issue of climate finance through domestic mobilisation, partnerships with the private sector and encouraging foreign direct investment.

Touching upon the issue of mitigation, adaptation, and loss and damage, he added, “It is not fair for countries that have been victims to high emissions to be asked to borrow more for mitigation and adaptation.” Loss and Damage, Dr Mohieldin added, need to be a separate entity and not mixed with mitigation and adaption. Drawing attention to the focus on implementation at COP27 to be held in Egypt in November, Dr Mohieldin said, implementation requires three things: science, evidence, data, and knowledge; institutions and policy to carry forward that information; and finance. The dignitary underscored the need for metrics related to adaptation and just transition.

Dr Mohieldin was accompanied by Mr Wael Mohamed Awad Hamed, Ambassador, Embassy of the Arab Republic of Egypt during his visit to TERI Gram where he interacted with the organisation’s distinguished fellows and researchers who briefed the Egyptian delegation about TERI’s activities on climate change and those related to COP27, including the COP27 Compass under the Act4Earth initiative that was launched at the World Sustainable Development Summit 2022. The delegates also took a tour of the TERI-Deakin Nano-Biotechnology Centre, the Mahindra Centre of Excellence and the TADOX waste-water treatment plant.

Tags
Climate change
Climate finance
Sustainable development
Themes
Climate
Environment
This block is broken or missing. You may be missing content or you might need to enable the original module.