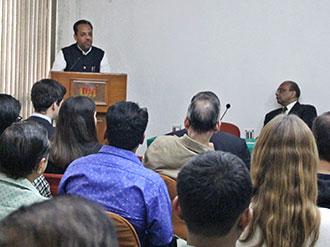 The report highlights that modern bioenergy will have the biggest growth in renewable resources between 2018 and 2023, underscoring its critical role in building a robust renewables portfolio and ensuring a more secure and sustainable energy system. Renewables will continue their expansion in the next five years, covering 40% of global energy consumption growth. Their use will continue to increase rapidly in the electricity sector and will account for almost a third of total world electricity generation in 2023. The report also highlights that renewables use will expand far more slowly in the transport and heat sectors due to weaker policy support and additional barriers to deployment. Consequently, the development and growth of renewables in both the sectors will be critical to enable the full transition of energy generation to low-carbon pathways.

Speaking on the occasion, Dr Ajay Mathur, DG, TERI, said, "The IEA report provides a timely analysis for those working in energy transitions and advocating for a larger role of renewables in the economy. Its findings on the role of bioenergy, especially regarding their role in heat and transport sectors, will help address a critical gap in expanding the scope of renewables beyond power generation."

Dr Arunabha Ghosh, CEO, CEEW, said, "The annual IEA renewable energy market report gives a timely and valuable update on the advances made in renewable energy markets around the world. This edition of the report is particularly insightful in bringing attention to the critical issue of the limited use of renewables in end-use sectors, especially heat and transport. CEEW has consistently called for the need to consider 'renewables beyond electricity'. In this regard, we value the analysis in the REMR and hope to continue collaborating with the IEA to support the global energy transition through broad applications and robust and deep markets."

The focus on bioenergy is part of the IEA's analysis of 'blind spots' of the energy system - issues that are critical to the evolution of the energy sector but that receive less attention than they deserve - such as the impact of air conditioners on electricity demand, or the growing impact of petrochemicals on global oil demand. It also identifies additional untapped potential for bioenergy to "green" and diversify energy usage in the industry and transport sectors.

Dr Fatih Birol, Executive Director, IEA, said, "Modern bioenergy is the overlooked giant of the renewable energy field. Its share in the world's total renewables consumption is about 50% today, in other words as much as hydro, wind, solar and all other renewables combined. We expect modern bioenergy will continue to lead the field and has huge prospects for further growth. But the right policies and rigorous sustainability regulations will be essential to meet its full potential."

The report underlines that position of China as the global growth leader in renewable energy as a result of policies to decarbonise all sectors and reduce harmful local air pollution. It will become the largest consumer of renewable energy, surpassing the European Union, by 2023. Of the world's largest energy consumers, Brazil has the highest share of renewables by far - almost 45% of total final energy consumption in 2023, driven by significant contribution of bioenergy and hydropower.