"It is not the planet that is fragile. It is us": PM Narendra Modi calls for global alliances to tackle climate change at the World Sustainable Development Summit 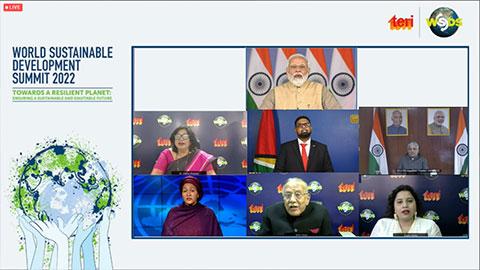 Addressing the need for global alliances to tackle climate change, the Prime Minister drew attention to the Coalition for Disaster Resilient Infrastructure, the International Solar Alliance as well as the new initiative LIFE – Lifestyle for Environment. LIFE, Mr Modi said, will be a coalition of like-minded people across the world who will promote sustainable lifestyle. "I call them [the] three Ps – Pro Planet People. This global movement of [the] three Ps is the coalition for LIFE. These three global coalitions will form the trinity of our environment efforts for improving the global commons," he added.

The WSDS 2022, the annual flagship Summit of The Energy and Resources Institute (TERI), is on the theme of ‘Towards a Resilient Planet: Ensuring a Sustainable and Equitable Future’. Observing that environment and sustainable development have been key areas of engagement, Mr Modi said, "We have heard people call our planet fragile. But it is not the planet that is fragile. It is us. We are fragile. Our commitments to the planet, to nature has also been fragile. A lot has been said over the last 50 years since the 1972 Stockholm Conference. Very little has been done. But in India we have walked the talk."

The WSDS 2022 is being attended by two heads of State and Government, Ministers for Environment from nearly a dozen countries, representatives from the United Nations, and delegates from 137 countries across the globe. Dignitaries at the inaugural event called for collective action, but also the need for mitigation and adaptation support, especially for developing countries.

Delivering his keynote address, Dr Mohamed Irfaan Ali, President of the Cooperative Republic of Guyana, underscored the need for the global leadership to make a commitment to the common global good. "This requires less talk and urgent action on mitigation actions as well as adaptation support," he said.

While Guyana is committed to the low-carbon agenda and the country’s ‘Low-Carbon Development Strategy 2030’ showcases its efforts to build a low-carbon economy, Dr Ali said the country is also committed to the advancement of its people. "When we speak about the climate agenda, we must [also] be able to provide alternative[s], we must be able to support the development aspirations of people all across the globe, especially of the developing countries. So while Guyana remains committed to this agenda, we also remain committed to the advancement of the living conditions and livelihood of our people through sustainable, aspirational exploitation of our natural resources to the benefit of the people."

Speaking at the inaugural, Ms Amina J. Mohammed, Deputy Secretary-General, United Nations emphasized "an avalanche of action" is needed to combat climate change. "Without transformative action made this decade led by all major economies to cut global emissions by 45%, our collective hope for a 1.5 degree [Celsius] world will disintegrate. We are already speeding past 1.2 degree [Celsius]. We have made strides in deploying renewables and growing the net-zero coalition exemplified by Prime Minister Modi’s leadership. But much more is needed," said Ms Mohammed.

Coal, she pointed out, must be rapidly phased down globally by 2030 and fully phased out by 2040. "At the same time renewable energy must be deployed in the same scale to ensure the energy transition is not only fast but just," observed Ms Mohammed.

Making a strong case for climate finance especially for developing countries, she said, "Developing countries do not have years to wait and must urgently reduce the vulnerability of the people, particularly the poorest. That is why the Secretary General and I have long called for 50 per cent of climate finance to be allocated to adaptation. Leaders in Glasgow agreed to double adaptation finance from 2019 levels. This is a good start. But it would not be enough."

The three-day Summit is the only independently convened event of such scale in the developing world that brings together world leaders, thinkers, scientists, industry and government representatives and other stakeholders on a single platform to work towards long-term solutions for the planet’s health.

Opening the Summit, Mr Bhupender Yadav, Minister for Environment, Forest and Climate Change, asserted the need for developed countries to meet their promises on cutting back emissions and proving the developing countries with climate finance. "Both environment and development are just two sides of the same coin and must proceed hand in hand. For development to happen, we don’t have to dismantle and degrade our green assets. Utilisation of resources must be based on mindful and deliberate utilisation and not mindless and destructive consumption," he added.

Hosted as it is on the back of extreme weather events across the globe in the recent years, the virtually held WSDS 2022 will focus on planetary well-being and experts will deliberate on a range of pressing issues ranging from climate change, sustainable production, energy transitions, global commons and resource security.

The Sustainable Development Leadership Award was also announced during the inaugural event. Introduced in 2005 to commend global leaders for their contributions to sustainable development and environment protection, the award was given this year to Mr. Michael R. Bloomberg, UN Special Envoy for Climate Ambition and Solutions, and Founder of Bloomberg LP and Bloomberg Philanthropies for his work on tackling climate change. Accepting the award on behalf of the teams at Bloomberg LP and Bloomberg Philanthropies, Mr Bloomberg said, "We all know we have a lot of work to do and not a moment to waste. The good news is all the steps we take fighting climate change will also grow the economy and create jobs and protect people’s health. India is leading by example and it was great to see the country make ambitious climate commitments at COP 26. Our company and our foundation are working with public and private sector leaders in India to help the country reach its goals. We are all in this together."

Delivering the welcome address, Mr Nitin Desai, Chairman, Governing Council, TERI said, "This Summit brings together political leaders who can translate sustainable development into policy, corporate leaders and executives who can translate it into investment choices, researchers and academics who can bring research and analysis into technology and people involved in civil society."

Giving the vote of thanks, Dr Vibha Dhawan, Director General, TERI, reminded that "It is nature that will eventually tide us through climate change and high carbon emissions. We require energy, we need development. But we have to realise that nature is more important and we have to sustain ourselves on this planet." 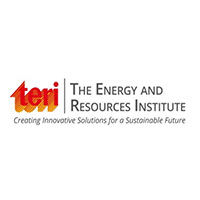