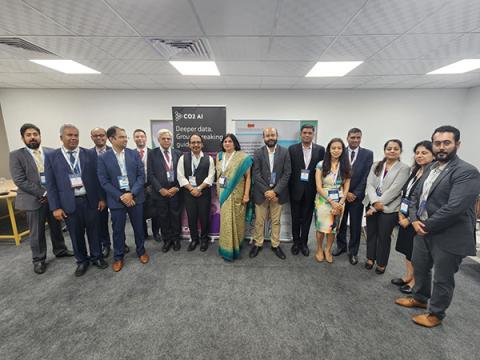 Sharm el-Sheikh, 11 November, 2022: The need to forge collaborations, create frameworks and evolve strategies to overcome the challenges in the path of industry decarbonisation and meet the Nationally Determined Contributions (NDCs) goal by 2030 and Net Zero goal by 2070 was emphasized upon by stakeholders at a high-level public-private dialogue on ‘Accelerating Actions to Fulfil India’s Long Term Climate Ambition’ at a COP27 side event in Sharm el-Sheikh on Thursday.

Organised by The Energy and Resources Institute (TERI) at the BCG COP27 Chalet, the panel discussions brought together industry leaders, sustainability experts and policy makers as they deliberated upon industry-specific pathways and strategies, including those for hard-to-abate sectors, to accelerate the move towards decarbonisation. The imperative need to develop and deploy alternative fuels such as green hydrogen, green ammonia, biofuel, and methanol are key to enabling the industry to transition their energy system on a sustainable and affordable basis, said the panellists.

Speaking at the event held under the ambit of the Industry Charter for Near Zero Emissions Ambition by 2050, instituted by TERI -- a coalition of 50 Indian businesses and corporates --Dr Vibha Dhawan, Director General, TERI, underscored the need for implementing a just transitions scenario in developing countries, which offers a huge opportunity to deploy advanced technologies. “But the emerging economies need to be made equal partners in developing those technologies,” she added.

In his keynote address Mr Nitin Prasad, Chairman, Shell Group of Companies, emphasized the need for collaborations and structures to meet targets. “There is no silver bullet. To deliver the NDCs, we will require a range of different solutions and actors. We have to take a number of near term immediate steps. We have to think of hydrogen pilots and methanol alternatives,” he added.

Mr Mahendra Singhi, MD & CEO, Dalmia Cement (Bharat) Ltd, mooted the idea of NDCs for industry. “Can we as signatories of the Industry Charter also work to create NDCs so that we know what we have to achieve by 2030,” Mr Singhi asked.

Mr Michael Zimonyi, Director of Public Affairs, Climate Disclosure Standards Board, said: “The ISSB Standards, while celebrating their first anniversary at COP27, is getting attention and great interest from across the globe. Nigeria, having adopted the ISSB Standards, gives us an open opportunity to work with India to take the momentum of G20 Presidency.”

Tags
Climate change
Carbon emissions
Climate finance
Themes
Climate
Environment
This block is broken or missing. You may be missing content or you might need to enable the original module.