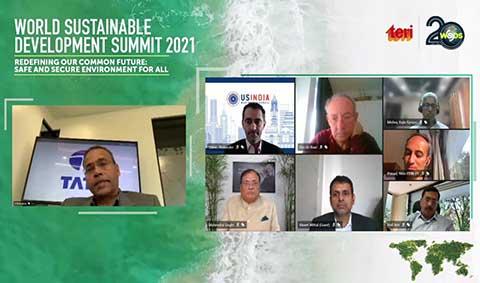 New Delhi, February 12, 2021: India has proven to be the most successful environmentally driven country among the G20 countries whose Paris commitments are well on track. Building on this, the World Sustainable Development Summit 2021 (WSDS) hosted a session focused on the need and advantages for businesses to adopt a zero-carbon future and low carbon industry transition. The sessions witnessed participation from several industry stalwarts working in energy and environment space.

Laying emphasis on the need to expedite environment friendly practices and congratulating India on its climate progress, Mr Michael Bloomberg, Founder, Bloomberg LP & Bloomberg Philanthropies, and United Nations' Special Envoy for Climate Ambition and Solutions said, "India has not only set ambitious renewable energy targets; it has also shown global leadership by spearheading the International Solar Alliance. That is the kind of innovation and vision we need in the race to zero emissions. It is encouraging to see Indian businesses committed to net zero future. Around the world, all business leaders, communities, states and countries are meeting and exceeding their Paris agreement goals. By investing in cleaner energy, we create more jobs and grow the economy, at the same time those investments improve air quality and public health and protect us from risk posed from climate change."

Shri Ravi Shankar Prasad, Additional Secretary, Ministry of Environment, Forest and Climate Change, Government of India stated, "As we take on the initial pathways of the Paris agreement, we realise that the step calls for collective actions by government, civil societies, private sector, citizens and these actions are to be based on equity and common responsibilities. National and global responses to climate change should be coordinated with social and economic development in an integrated manner with a view to avoid adverse impacts later considering legitimate priorities of the developing countries like India for achieving sustained economic growth and eradication of poverty."

Even today, almost 100 per cent of the investments in energy efficiency and renewable energy are ultimately made by the private sector. To accelerate innovation required for a zero-carbon future, collaboration between various stakeholders such as businesses and government is key. Elaborating on this, Mr. Nitin Prasad, Chairman, Shell Group of Companies, India said, "The gestation period for a new technology in energy industry is roughly 30 years. If we are really going to get these technologies off the ground, we do not have 30 years to scale and commercialise them, to be able to bring them forward, to be able to realise the benefits, integrate them. We fundamentally do not have the time that is available to us. This is where we need a tremendous amount of support from various industries, government, academia and start-ups to realise that we have to change the way that we take technology forward, commercialise and finance it."

Adding to the comments, Mr. R Mukundan, Managing Director, Tata Chemicals Ltd, said, "Tata Chemicals is approaching net zero from two broad themes – internal and external. We have taken net zero issue right up to the board level, mandatorily pushing towards low carbon action. Our first milestone is to be well below - 2°C to be in line with what chemical industry needs to do. The second element is to give value to the carbon price. The commitment to achieve low carbon emissions has rightfully drawn our attention to promoting energy efficient buildings, process and fugitive emission reduction, further switching over to wind and solar form of energy promising sustainable living."

Mr. Mahendra Singhi, MD & CEO, Dalmia Cement (Bharat) Ltd, said, "For Dalmia Cement, net zero carbon is net prosperity and net happiness. This is not only for our organisation but for the group. . As a philosophy we have been working for the past 10 years, envisioning a future that is clean and green, at the same time profitable and sustainable. In 7 years' time we will become one of the lowest carbon footprint cement companies in the world and the most profitable cement companies in India. We follow a roadmap that by 2040 we become not only net zero company but also carbon negative.."

WSDS thematic track on 'Low Carbon Industry Transition' laid the foundation for how a net-neutral emission industry sector is crucial to meeting the goals of the Paris agreement. In this endeavour, harder to abate sectors steel and cement are especially of importance. The session laid imminent stress on three factors most stressed upon for achieving this – Technology Transfer, Availability of Finance, and Demand Creation for products such as Green Steel.

Mr Pradip Kumar Tripathi, Secretary, Ministry of Steel, Government of India who headed the Low Carbon Industry transition said, "If we really wish to achieve near net carbon neutrality by 2050, radical changes will be required in steel making technology, such as hydrogen produced from renewable electricity. With tremendous efforts dedicated to this area, large scale production of hydrogen economically with low-carbon footprint will continue to be a challenge for the next few years. It is vital to discuss pathways to decarbonise and ensure that India stays on track to meet its emission targets while making sure that the aspirations of its people are met."

Mr Jacob Werksman, Principal Adviser to Directorate General for Climate Action, European Commission stated, "The EU and India now share the urgent challenges of net zero emissions with a just transition that leaves no one behind. We have seen that as the Paris Agreement becomes operational more governments and communities are setting similar goals. Net zero means that targets can no longer be designed as incremental steps but as milestones on a pathway towards net zero. Targets must also be backed by policy and implementation. Net zero also means that all financial flows, research, even economic recovery stimulus packages must be aligned with the goals of the Paris agreement."

The TERI-British High Commission-led session introduced the UNFCCC's Race to Zero campaign, which is championed by the UK Government, which currently holds the presidency of the COP26. The campaign aims to foster collaboration among non-state actors, including businesses, cities, civil society and organisations to build momentum to shift to a decarbonised economy and of COP26.

Introducing the Corporate Green Leadership Alliance, Mr. Chirag Gajjar, Head Subnational Climate Action, Climate Program, World Resources Institute, said, "An alignment approach to work together will help us shift the enabling environment along with working with various businesses within India. The Alliance aims to provide a space for a network of partners, institutions, and their respective initiatives, along with business actors and stakeholders, through strategies aimed at implementing focused action to achieve the Alliance's mission, including knowledge creation, co-creation of knowledge, building capacity, data and analytics to present specific sectoral deep dive reports and action reports, and several campaigns throughout the year to achieve its mission."

On the Race to Zero Emissions aspect, Mr. Nigel Topping, High level Climate Action Champion for COP26 said, "My role as the high-level climate action champion is to work with the private sector and local government to drive ambition and action. TERI is a great example of the global importance of Indian expertise in tackling the climate challenge. Our climate action can stop 8 million premature deaths because of air pollution. If we have consensus that it is possible to get to the zero-carbon economy by 2050, then the business leaders will work to get there earlier."

In her remarks on the status of achieving zero carbon goals Ms. Rhiannon Harries, Deputy Trade Commissioner, South Asia, British High Commission, said, "We need countries, cities, and states and businesses to move on a credible path to reach net zero. A collaboration between India and the UK will be crucial to this. We hope that India will over-achieve on its climate commitments. It is not just the Indian government taking climate action. India is home to some of the biggest MNCs in the world; many are driving this change in India and globally."

Adding to her perspective, Ms Harrier continued, "Businesses in India and world are making commitments, and there is no shortage of initiatives they are signing up to. The UK, as COP26 President, is clear that commitment should be credible, with an underpinning action plan, which has been independently verified independent, and secondly linked to wider climate objectives, and as part of an influential grouping, encourage others to take climate action."

Organized annually since 2001, the WSDS platform through this session deliberated on why zero carbon future makes business sense and the role of corporates to accomplish India's commitments under the Paris Agreement. Progressive Indian businesses are the key to the country's transition towards low carbon development. Accounting for approximately one-fourth of India's GHG emissions, industries can play a significant role in country's NDC's commitment to reduce its emission intensity.

Tags
Energy efficiency
Greenhouse gas emissions
Renewable energy
Themes
Energy
This block is broken or missing. You may be missing content or you might need to enable the original module.