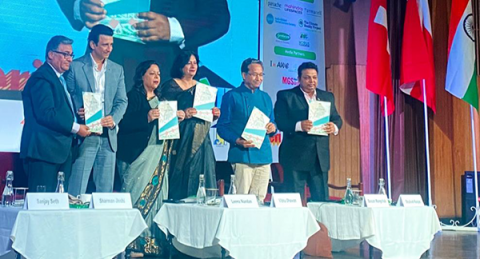 Issues related to building sector and other allied sectors such as mobility, urban services, electricity services, waste management on a net-zero emissions pathway were the prime topics of discussion. Policy interventions and regulatory frameworks that will be needed for the future were debated. Questions regarding what the relevant institutions are fit for the purpose and how do we ensure that people at large are contributing and furthering the achievement of these goals were the subject of discussions over the two-days at the 14th GRIHA Summit.

To this end, the theme of this year’s Summit, Towards Net Positive Habitats, was aligned with India’s vision of climate neutrality. The discussions and interactions inspired conversations and actions to reduce emissions, build community resilience, increase financing mechanisms conserve biodiversity & ecosystems to ensure a sustainable future.

India’s commitment at COP26 of a 5-point approach or panchamrit to achieve net zero emissions by 2070 is an ambitious step towards tackling climate change. Achieving climate neutrality requires an all-of-economy and society approach making it the responsibility of every industry to partner with the government towards meeting this ambitious target.

Building operations and construction industry have a significant role to play as it is one of the largest CO2 emitters globally. India is still in the process of building out its infrastructure. Most of the buildings and habitations that India will require are yet to be built.

In keeping with the commitments made at COP26 in Glasgow, GRIHA has stepped up its efforts. It launched the Decarbonizing Habitats Programme in June 2022, along with Net Zero Energy, Water and Waste Certifications.

The green buildings industry has grown over time. However, to achieve the nation’s goals, different industries cannot continue to perform in silos. Cross-sectoral partnerships will have to be considered for a holistic impact to address decarbonization, carbon sequestration, net positive waste-water-energy. Sessions to bring together different industries and stakeholders on a common platform have been curated to deliberate on the issues, current challenges, impacts and way ahead.

The GRIHA rated projects of the current year projects under different variants of GRIHA, SVA GRIHA, GRIHA EB, GRIHA LD, GRIHA AH and the winners of the GRIHA Exemplary Awards were felicitated during the Summit. The 9th Volume of GRIHA’s annual magazine “Shashwat – Let Nature Be” was also launched during the Summit.

A series of events were hosted ahead of the Summit. A Nukkad Natak competition was organised to involve children, who are the future decision-makers and consumers of services, to spread awareness and instil environmental consciousness in them from a young age. The winners of this competition were felicitated during the event and given an opportunity to perform in front of the dignitaries to further encourage them. Other events of a technical nature, which were in collaboration with USGKnauf and One Click LCA. Over the years, GRIHA has developed long-standing associations with multiple stakeholders working towards the common goal of implementing sustainable and low carbon footprint buildings. This year two Memorandums of Understanding were signed at the Summit, one with Life Insurance Corporation of India and the other with 2000-Watts-Smart-Cities Association to promote sustainable habitats. The event concluded with a cultural performance.

The 14th GRIHA Summit’s aim was to prioritize the society and nurture the environment by giving back more than what’s been taken without compromising on the financial aspects.

India, in its INDC document submitted at COP21 in Paris has highlighted GRIHA as an indigenous green building rating system developed in India. The United Nations Framework Convention on Climate Change (UNFCCC) in their third biennial update report on India has acknowledged the work done by GRIHA in the field of carbon mitigation in the building sector. GRIHA, the national green building rating system of India, received accolades in the spheres such as energy efficiency, site planning, and conservation and efficient utilization of resources.

GRIHA Council is working in complete alignment with the targets set by India in the COP26 for achieving net zero carbon emissions by 2070. In this regard GRIHA Council has launched the decarbonization programme to meet carbon mitigation targets in the built environment.

Tags
Building design
Sustainable cities
Renewable energy
Themes
Habitat
Buildings
Cities
This block is broken or missing. You may be missing content or you might need to enable the original module.