Collective action on climate adaptation ahead of COP26 is key: Sh. Ashwini Kumar Choubey, Minister of State, MoEFCC at the Adaptation Futures Conference organized by TERI 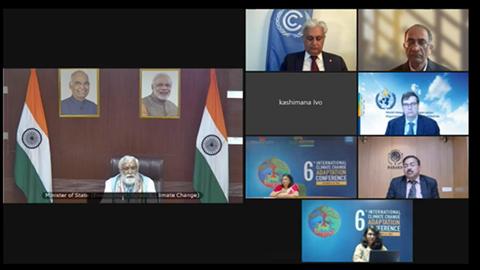 New Delhi, October 5, 2021: "Asia and India face a diverse set of developmental challenges which are exacerbated by climatic factors and existing vulnerabilities shaped by region-specific social, economic, political and cultural factors. This Conference therefore presents tremendous opportunity for all stakeholders to engage in constructive and action-oriented dialogue, especially ahead of COP26 in Glasgow. Given that the changes are already being experienced and the impacts are inevitable, efforts towards adaptation need to be paced up," said the Hon’ble Minister of State, Ministry of Environment, Forest and Climate Change, Government of India Sh. Ashwini Kumar Choubey, in his Ministerial Address at the Inaugural Session of the Sixth International Adaptation Futures Conference on Climate Change Adaptation.

"Adaptation measures should be designed to cater to specific needs of the country, community, and region. For India to accelerate its adaptation action there is a need for enhanced support in terms of bilateral or multilateral climate funding for adaptation. Technical support to subnational governments, enhancing capacities for planning and implementing adaptation action, extending robust scientific research and evidence along with a greater role of private sector in R&D, innovation, and raising domestic climate finance through Public-Private partnership are crucial steps in this direction," the Minister added further. The longer we take to act, the harder and costlier it will become to adapt, he emphasized.

Welcoming the dignitaries to the Inaugural Session through her Welcome Address, Dr Vibha Dhawan, Director General, TERI said, "As the world economies are rebuilding and adapting to the pandemic, we have an opportunity to build more sustainable economic recoveries, and strengthen resilience to future shocks, by scaling up investment in climate adaptation."

Highlighting the critical timing of the Conference and the need for urgent climate adaptation action, Dr Anand Patwardhan, Chair, Science Committee, Adaptation Futures and Professor, School of Public Policy, University of Maryland expresses the hope of many that, "COP26 will become an adaptation COP." He further added that, "Challenges of building climate resilience and adaptation capacity are critical to deal with the impacts of climate change. It is important to make science and policy equal partners in our efforts to develop climate change adaptation and put it in practice."

"The importance of accelerating adaption action and closing adaptation gap has never been clearer. While the renewables revolution is attracting considerable investment, adaptation funding is far too low." said Dr Yannick Glemarec, Executive Director, Green Climate Fund in his address at the Conference’s inaugural session.

Underscoring the gravity of climate change adaptation Mr Ovais Sarmad, Deputy Executive Secretary, UNFCCC said, "Our generation has an unprecedented opportunity to fight climate change and reduce our vulnerabilities. We are at a pivotal point in history that might decide the fate of the race and our planet. The National Adaptation Plans by countries provide us with immense opportunities to tackle climate change impacts but we need to ensure that these measures are implemented."

Emphasising on the need of climate change adaptation and the need to pay greater attention to the science, Dr Maarten Kappelle, Head, Thematic Scientific Assessments & Head Secretariat, World Adaptation Science Programme (WASP), UN Environment Programme (UNEP), Science Division said, "Over more than 30 years, science has been warning us about climate change and the critical need to progress climate action protect people, planet, and prosperity. We must act now, step up our game and become bold and ambitious. We need to pay more attention to and invest greater resources in climate change adaptation, especially in adaptation planning, implementation and finance."

"As clearly indicated in the latest IPCC report, global climate action still falls short of what is needed to achieve the Long-Term Goals of the Paris Agreement...Mitigation, emission reduction and adaptation need to go hand in hand as building blocks of the Paris Agreement," said H.E. Mr Ugo Astuto, Ambassador of the EU to India and Bhutan in his address at the Inaugural Session of Adaptation Futures Conference.

Dr Gerhard Adrian, President, World Meteorological Organization stressed that to solve the global problem of climate change, we need global infrastructure and a global system for data exchange. While the quality of information about climate change and weather events is improving a lot, thanks to progress in science, but we recognize that not every member state is not able to process this information. It is a technical and a capacity problem.

"We cannot lose a single year, and we must also continue to constantly raise adaptation ambition year-on-year," said Dr Patrick Verkooijen, CEO, Global Center on Adaptation in his Address at the Inaugural Session. "We must encourage all stakeholders to mainstream adaptation in everyday business in communities and social decision making."

Dr. G.R. Chintala, NABARD Chairman highlighted that agriculture is in the frontlines of climate change, in terms of both its dependence and impact on the natural resources, due to which the impact would detrimental. "Farmers’ income can drop by 15-18% due to climate change which is alarming especially for India where communities are highly dependent on agriculture." A statement by Early Career Researchers on accelerating adaptation action was released followed by a Vote of Thanks by Ms. Suruchi Bhadwal, Director, Earth Science and Climate Change Division, TERI.

The week-long Conference seeks to build on the momentum on adaptation generated by the Global Commission on Adaptation by holding discussions around the themes of governance of adaptation; limits to adaptation; fairness and equity in adaptation; knowledge for actions; nature-based solutions; and financing adaptation.

Tags
Adaptive capacity
Climate adaptation
Climate vulnerability
Themes
Climate
This block is broken or missing. You may be missing content or you might need to enable the original module.