Children are important stakeholders in bringing about change, experts at launch of TERI book Pollution Solutions: For a Cleaner, Greener Earth 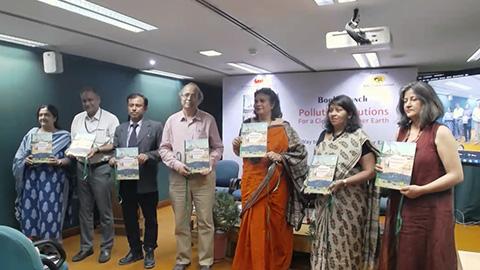 New Delhi, March 29: Children are important stakeholders in the path to sustainable development, in addition to being the most effective agents of climate change-related actions, emphasized experts at the launch of Pollution Solutions: For a Cleaner, Greener Earth, a book for children authored by senior journalist Urmi A Goswami and brought out by The Energy and Resources Institute (TERI) supported by GAIL (India) Limited, in New Delhi on Tuesday.

The book, aimed at children in the age group of 8-12 years, serves as a step-by-step guide to pollution control and sustainable development. The author introduces children not only to different aspects of pollution, but also to the concept of climate change and global warming.

Launching the book, Dr Vibha Dhawan, Director General, TERI, said, “We have to leave behind for our children at least the kind of environment we inherited. Development has to take place; fortunately, we have greener options now.” Asserting that children are the most important stakeholders in bringing about change, she noted that it is our collective duty to impart to them values of sustainability.

Publishing good books, observed Ms Anupama Jauhry, Head-TERI Press and Associate Director, TERI, is a service to society. “We have built an empire on pollution. Pollution and growth have become inextricably linked. While laws and regulations are in place, the effects of pollution are still apparent. Apart from introducing changes in policies, including behavioural changes have assumed greater importance,” observed Ms Jauhry.

In his opening address, Dr Suneel Pandey, Senior Fellow and Director, Environment and Waste Management Division, TERI, emphasized the need to view the problem of pollution holistically. “Pollution should not be seen in silos but holistically. Pollution Solutions is a step in the right direction as the author also tries to bring in the climate change perspective as well,” said Dr Pandey.

In his special remarks, Mr MV Iyer, Director (BD and Marketing), GAIL (India) Limited, said the authority has been highlighting the menace of air pollution long before it became a part of mainstream conversation. “Although awareness has increased over the years, further sensitization to nudge individuals to lead a sustainable and green lifestyle is needed. One of the ways is to start the conversations early, especially in schools and colleges. We realize that change happens more often through public-powered democratic movements than enforcement through laws,” said Mr Iyer.

Author Ms Goswami observed the book is a way of addressing the issue of pollution in a way that makes sense to children. “The book also deals with kinds of pollution which are not talked about often — light and noise pollution, for instance. The idea is to engage with children,” added Ms Goswami.

In a panel discussion on ‘A Way to Cleaner and Greener Earth’, Dr Sumit Sharma, Programme Officer, UNEP; Mr Santanu Roy, Executive Director, GAIL (India) Limited; Dr Kavita Sharma, Professor, Department of Elementary Education, NCERT; and Ms Goswami, deliberated on how individual action can bring about incremental but impactful changes. “Children can guide us in adopting a better way of living,” said Dr Sharma. Noting that time is running out on climate action, Mr Roy asked, “Everyone has a part to play, but who takes the baton?” Professor Sharma addressed the need for a multi-disciplinary approach to environmental education; Ms Goswami underscored the power of small steps in bringing about change. “It is important to take small measures as well because they add up,” she added. Dr Livleen K Kahlon, Senior Fellow and Associate Director, Environment Education and Awareness, TERI, delivered the vote of thanks.

Pollution Solutions: For a Cleaner, Greener Earth is available at https://bookstore.teri.res.in/

Tags
Air pollution
Climate change
Sustainable development
Themes
Climate
Environment
This block is broken or missing. You may be missing content or you might need to enable the original module.