Act together, support innovation: PM Modi calls upon every country to think of greater good in fight against climate change 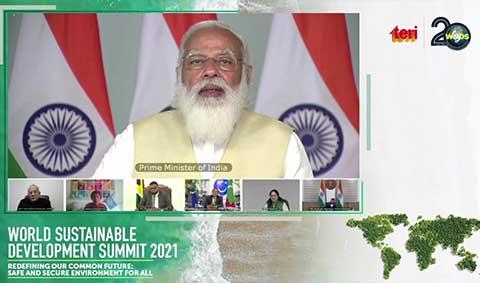 - Climate Justice is inspired by a vision of trusteeship where growth comes with greater compassion to the poorest: PM Modi

- Energy and industry transition, adaptation and resilience, nature-based solutions, climate finance, circular economy, clean oceans, air pollution, among a range of topics is being discussed at the 20th edition of TERI's WSDS

New Delhi, February 10, 2021: "The road to fighting climate change is through climate justice and this requires us to be large hearted by thinking of the bigger and the long-term picture", the Hon'ble Prime Minister of India, Shri Narendra Modi, said, while speaking at the inauguration of the World Sustainable Development Summit 2021. The twentieth edition of The Energy and Resources Institute (TERI) flagship event was inaugurated virtually by the Hon'ble Prime Minister of India, Shri Narendra Modi on February 10th, 2021 in the presence of dignitaries that included H.E. Dr Mohamed Irfaan Ali, President of the Cooperative Republic of Guyana, Mr Mohamed Nasheed, Speaker of the People's Majlis, Republic of Maldives (Former President of Maldives), Ms Amina J Mohammed, Deputy Secretary-General, United Nations, and Shri Prakash Javadekar, Hon'ble Union Minister of Environment, Forest, and Climate Change (MoEF&CC).

"The poor are most impacted by climate change. Climate Justice is inspired by a vision of trusteeship where growth comes with greater compassion to the poorest. It also means giving developing countries enough space to grow. When each of us understands our individual and collective duties climate justice will be achieved. India's intent is supported by concrete action and spirited public efforts. We are on track to exceed our commitments and targets on Paris. We committed to reduce emissions intensity of GDP by 33% to 35% from 2005 levels. You will be happy to know that a drop of 24% of emission has already been achieved," Prime Minister Modi added further. Read PM's full speech here.

Addressing the inaugural gathering, Shri Prakash Javadekar, Hon'ble Minister, Environment Forest & Climate Change, said, "I am very happy to be a part of WSDS 2021. With dedication and commitment to the cause of promoting sustainable development, WSDS has grown into an internationally recognised forum that promotes thoughtful discussions that create an actionable agenda for future sustainable conferences. Our Honourable PM launched the ISA, Coalition of National Disaster Infrastructure and Mission Innovation which has been picked up by the world very well."

"India is implementing its pledges. Four international reports including the United Nations Environment Programme's emission gap report, the climate change action tracker report, the climate change performance index, and the transparency report, state that with PM Modi's support, India is leading from the front and is implementing all its pledges well before time. We have reduced emission intensity; increased our forest cover and with 90 GW of renewable energy, we will definitely achieve PM's target of 450 GW of renewable energy by 2030", the minister added. 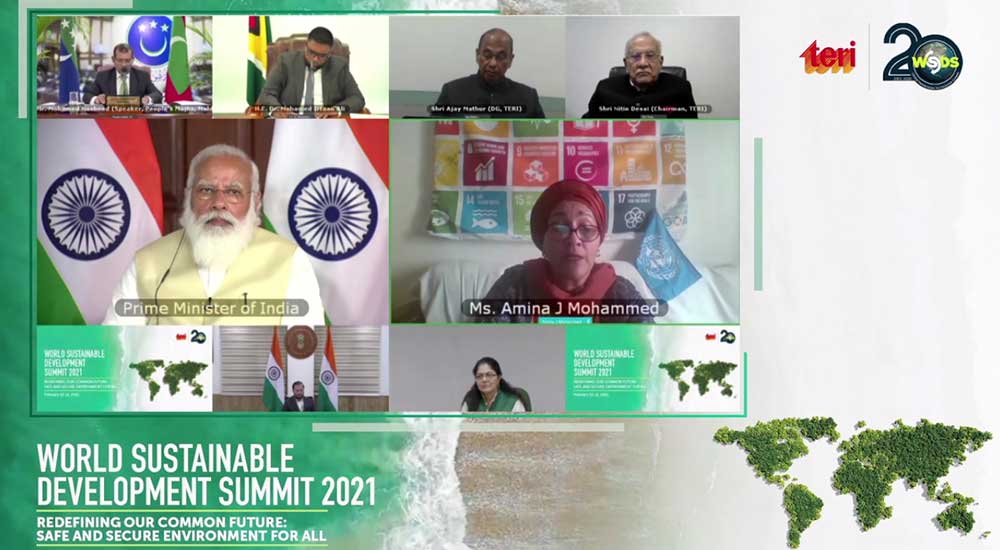 Delivering the welcome address, Shri Nitin Desai, Chairman, TERI, said, "The summit over the course of twenty years has brought together people, leaders, activists, and experts around the world to exchange the ideas for a sustainable future. In many ways, our PM has taken a lead in this initiative and has been a strong leader in the renewable energy sector."

Highlighting how the World Sustainable Development Summit has evolved over the years, Ms Amina J Mohammed, Deputy Secretary-General, United Nations, said, "Over the years, this event has addressed the most pressing global challenges of our time. Science tells us that we must cut GHGs by 45% by 2030 and reach net zero by 2050. India is currently the only G20 country that has overachieved its NDCs. The target of 450 GW of renewable energy by 2030 will bring more jobs, cleaner air, and a more secure power grid. We count on India on its contribution to multilateralism on COVID vaccines, climate change and on peace keeping."

Commending India's climate goal commitments, H.E. Mr Mohamed Nasheed, Speaker of the People's Majlis, Republic of Maldives (Former President of The Republic of Maldives), said, "The climate crisis is a great national security threat to the world. Climate change is already upon us but that does not mean we are going to give up. To survive climate change, we need to work with nature and not against it by adopting smart biological adaptation strategies. Time is running out and we must cut emissions, quickly. In December, India announced an eye-catching target of 450 GW of renewable energy target by 2030 which shows incredible leadership by the Prime Minister of India. I thank PM Modi for taking the leadership in providing strategies that will deliver a safer and prosperous future for all."

Addressing the gathering, H.E. Dr Mohamed Irfaan Ali, President of the Cooperative Republic of Guyana, said, "I am pleased to join the 20th inauguration ceremony of the WSDS 2021. I commend TERI for sustaining this initiative where the government of Guyana is participating since 2011. The time has come for society to adopt technologies and innovations. Over the years, we have followed the Paris Agreement commitment in our efforts towards protecting the environment by moving the country towards a sustainable development path though our low carbon development strategy. The requirement is of a greater political will to upscale the use of these technologies. It is a critical role, not only for government but also private sector and organisations like TERI that help facilitate the technological transformation and uptake."

Dr Ajay Mathur, Director General, TERI, who delivered the vote of thanks at the inauguration, said, "It is an honour to have the Hon'ble Prime Minister of India inaugurating this summit. We need to develop new and innovative partnerships which will help us get together in combating climate change."

The three-day event will address the theme, 'Redefining Our Common Future: Safe and Secure Environment for All'. As the country partner of the WSDS 2021, the UK government is closely involved in various sessions of the summit, in the run-up to the COP 26, which it is preparing to host in Glasgow in November this year. Bloomberg Philanthropies, Shakti Sustainable Foundation, Tata Cleantech Capital, European Union, USAID, World Bank, are some of the key institutions partnering with the summit to rally around the themes of clean air, renewable energy, environment, clean oceans, energy transition, resource efficiency and circular economy, among several others. These will be deliberated across nearly ten plenary and twenty thematic tracks over three days.

Over the course of three days, the summit will bring together a wide number of governments, business leaders, academicians, climate scientists, youth, and the civil society in the fight against climate change. India's Ministry of Environment, Forests and Climate Change (MoEFCC), Ministry of New and Renewable Energy (MNRE) and Ministry of Earth Sciences (MoES), are key partners of the summit.

Since its inception in 2001, WSDS has been a significant platform for showcasing India's plans, policies, priorities, and actions by identifying the most topical issues, of environment and sustainability. Over the years, many collaborations and partnerships that have been fostered and, during the three-day event, new ones will be launched and conceived.

The detailed agenda of the programme can be accessed here.