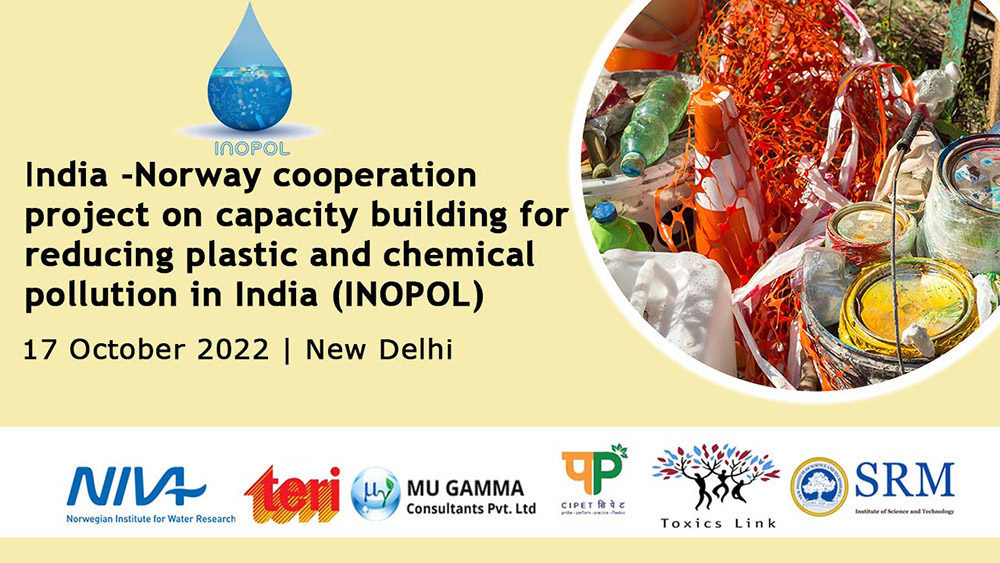 The Energy and Resources Institute (TERI), in association with, NIVA, CIPET, Mu Gamma, SRMIST and Toxics Link supported by The Norwegian Embassy is organising the final dissemination event of India-Norway cooperation project on capacity building for reducing plastic and chemical pollution in India’ (INOPOL) on October 17, 2022 at Juniper Hall, India Habitat Centre, New Delhi from 10:30 AM to 2:00 PM.

‘India's plastic waste generation has more than doubled in the last five years with an average annual increase of 21.8 per cent according to the Central Government of India. The continued increase in plastic waste generation aggravates the problem of land-based sources of plastic pollution in the marine environment. The challenges related to macroplastics, microplastics, and chemical pollution are closely interlinked, as plastics may contain chemical additives and contaminants, and thus are carriers for persistent organic pollutants (POPs).

In the wake of the recently introduced ban on single-use plastics (SUPs) and the introduction of extended-producer-responsibility (EPR) rules, the issues of improper plastic waste handling are expected to reduce substantially. However, the plastic waste which is already in circulation and the pollution caused by hazardous chemicals (including POPs) require a different strategy.

In this context, the Indo-Norwegian collaborative project titled ‘India-Norway cooperation project on capacity building for reducing plastic and chemical pollution in India’ (INOPOL) has been involved in building the knowledge and capacity of different groups of stakeholders such as the Scientists and Experts at the State Pollution Control Board, research & academic organizations and civil society organizations to help reduce the releases and impacts of plastic pollution and the ‘new’ POPs listed under the Stockholm Convention, which India has recently ratified. The project has also generated coherent data on the levels of macro-plastics, micro-plastics, and POPs in different matrices such as water, soil, sediment, and biota in the riverine and marine environments of Tapi and Daman Ganga rivers in the Surat and Vapi Districts of Gujarat. This project is being implemented by a team of international experts from Norway (NIVA), and leading institutions in India (TERI, CIPET, Mu Gamma, SRMIST, Toxics Link)

The objective of the event:

Agenda
Background-note-and-Agenda.pdf543.47 KB
Brochure
Agenda-Indo-Norwegian-Marine-Initiative-event-on-October.pdf505.12 KB
Themes
Waste
Tags
Plastic waste
This block is broken or missing. You may be missing content or you might need to enable the original module.