With a population of about 315,310 persons in 2011 (Census, Government of India), the city of Alwar is one of the fastest growing urban areas in Rajasthan state as well as the National Capital Region (NCR) in India. The rapid pace of industrialisation in the city is accompanied by increasing residential, commercial and industrial areas in the city, which have increased pressures on the existing infrastructure. This has been felt most acutely in the public transport sector. Intra-urban mobility connectivity with the adjacent cities is a serious challenge in view of the growing travel demands, which have arisen as a result of the increasing development. The poor/ low-income communities, which don’t have personal mobility modes are the most affected because of lack of adequate and quality public transport services. The mobility needs in the city of Alwar were until recently, dependant on the local informal modes such as the auto rickshaws, vikrams1 and tempos. These modes were generally old and poorly maintained offered cheap and flexible services to the poor and the rest of the city population, but at the same time brought along with them the problems of air pollution, noise, overcrowding, and were considered highly unsafe. As a result, significant risks were attached to their use and were therefore not preferred by women, elderly and children for their travel needs. Due to the medium size of the city, other options of introducing city bus service, metro, BRT system, etc. faced many viability constraints. To cater to the growing mobility demands in the city, a minibus passenger service was launched in Alwar on 3rd December 2011. A fleet of 58 vehicles was launched in the city. It included Euro IV compliant Tata Magic and Mahindra Maximo models of mini-passenger vans having a seating capacity of eight persons including the driver. These new vehicles have replaced the old autos, vikrams and tempos. The conception of the idea and the project launch took only about two months’ time. Launched with the idea of reducing the congestion on roads caused by private vehicles, the project is a joint effort of various organizations like the Regional Transport Office (RTO), Punjab National Bank, Urban Improvement Trust (UIT) Alwar, UIT Bhiwadi, and Deputy Registrar Co-operatives, with each agency having a clearly defined role. The entire project is privately funded, with the District Administration playing a coordinating and facilitating role. The whole model was worked out with the idea of “minimum investment with maximum returns”. The motto of “Samman aur Seva”2 i.e. respect and service is the guiding principle behind the initiative. As a part of the project, the district government brought in an attractive exchange programme for the three-wheeler owners. 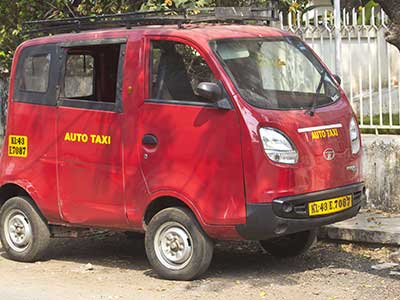 The idea was to first give the opportunity to the people already engaged in public transport service to upgrade to a newer and better means of transport. As a result, around 720 vehicles have been exchanged and scrapped under this scheme over a period of one year. Additionally, other incentives like loan facilities at reduced interest rates from nationalised banks and financial institutions also helped in the easy purchase of the new mode. Also, arrangements were made to ensure documentation of all formalities (including vehicle insurance, RTO formalities, route permits and others) under one roof, once at the time of purchase of the vehicle. The RTO office was made responsible for allotting the route permits to the applicants and also to ¬ensure that all the passenger vehicles ply as per the government norms. Painted in attractive colours, every Alwar Vahini vehicle has a unique number prominently displayed on the exterior. This helps in easily identifying the vehicle if any sort of traffic violation is made. Significant attention has been given to driver behaviour and etiquettes. An NGO specialising in soft skills training has been engaged in the personality development programme for the drivers. The drivers are advised to keep their vehicles clean and well maintained, follow the proper uniform code, and also address their passengers respectfully. Apart from introducing the new vehicles in place of the older three-wheelers, certain infrastructural measures have also been identified for effective implementation and management of the project. These include the creation of support infrastructure in the form of construction of 20 modern bus stops, signages, erection of 45 high mast lights, traffic signals, installation of 25 Close Circuit TeleVision (CCTV) cameras for traffic monitoring throughout the city and construction of an advanced police control room. UIT Alwar and Bhiwadi have built the support infrastructure and also borne the cost of uniforms, identity cards, group insurance and soft skills training of the drivers. Specially designed driver uniforms are provided to maintain similarity and easy recognition in the city. A cooperative society has also been formed of all the Alwar Vahini owners so that they can avail their rights and organise themselves. All the drivers are entitled to get regular medical check-ups and insurances. Regular meetings and get-togethers are held within the society to build up a feeling of belonging and a unique group culture. To enhance the livelihoods of the women and provide secure travel options to women commuters, Mahila Alwar Vahini3 was launched in January 2012. The vehicles under this scheme have lady drivers and follow a special light red colour scheme, which allows easy identification. Alwar did not have a city taxi service. A 24-hour taxi service was also launched at the same time. Any person requiring a taxi can call for the vehicle through the Alwar Vahini helpline. The Alwar Vahini project has gained significant attention in its one year of operations. The attractive vehicles carry more than 100 thousand passengers every day, especially from the weaker sections of the society. At present, around 1,310 Alwar Vahini vehicles have been launched and it is projected that the total requirement would be around 2,200 vehicles in the entire district. As these vehicles are becoming more and more popular within the city, private vehicle usage has reduced considerably and provided benefits like reduced pollution and congestion, thus making the city more liveable. With zero investment on the part of the government, the project brings in additional revenue to the government from permit fees and taxes. It has employed more than 3,000 persons directly and many more indirectly. The project has the potential of quickly transforming the public transport scenario with minimum investment and at the same time creating jobs and providing mobility solutions to the public at large.

1. 'Vikram' is the local name given to a three-wheeled auto rickshaw offering shared passenger services in the city of Alwar

2. "Samman aur Seva" meaning Respect and Service in English is the motto of the Alwar Vahini service. It encourages everyone to give due respect to all involved in the project – stakeholders as well as the passengers.

3. Mahila Alwar Vahini: Here, the word Mahila literally means woman. This service has lady drivers and is particularly aimed at offering safe and comfortable commuting services to the women in the city.

Themes
Transport
This block is broken or missing. You may be missing content or you might need to enable the original module.