As promised by President-Elect Joe Biden, the world awaits January 20, 2021 for the United States of America to join back the Paris Agreement. To understand and analyse recent developments involving the world's major emitters, TERI organized a discussion on ‘Global Politics in an Era of Disruption: Insights from the US, EU and China'. 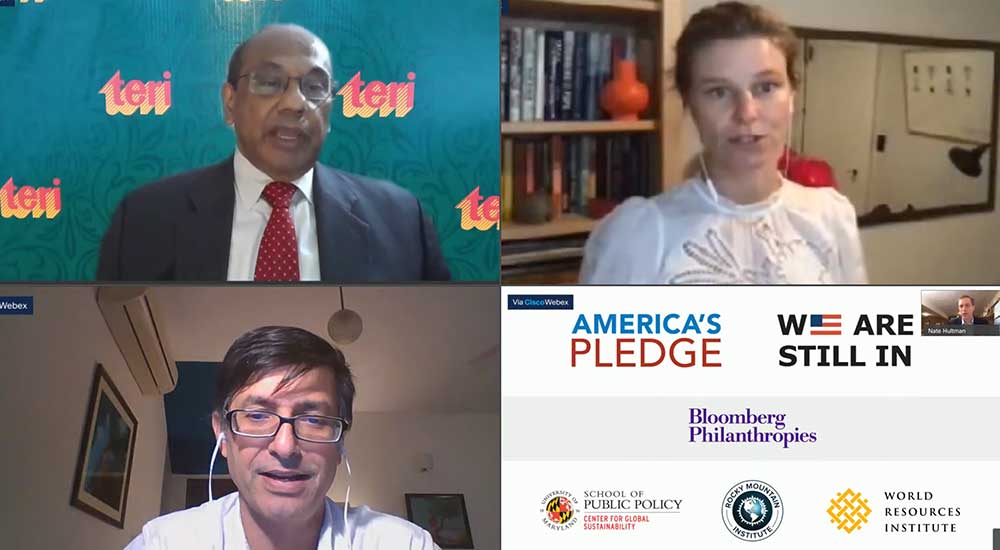 We realize that undoing what has been done in the past four years under the current U.S. administration will take time. Nevertheless, it's a breath of fresh air. We are in great times. The EU, Japan and Korea have decided to go carbon neutral by 2050, China by 2060. We have goals, but it's also important to have pathways to reach those goals.

In 2017, when President Trump withdrew from the Paris Agreement, Michael Bloomberg and Jerry Brown launched America's Pledge to ensure that local progress would continue in the U.S. despite the rhetoric from Washington.

Today, the Biden Administration inherits a very strong basis on which to build their climate commitments. Bottom-up leadership in the U.S. has kept us on the path to progress. From 1 state and 22 cities in 2017 to now, 13 states and 130 cities have made commitments to 100 per cent renewable energy.

America's Pledge analysis demonstrates the power and potential of subnational action to drive emissions reduction. Bottom-up actions from states, cities and businesses can reduce U.S. emissions upto 37 per cent by 2030. This can go upto 50 per cent by 2030, if they build a true partnership with the federal government.

America's Pledge study shows in 2020, right in the heart of the pandemic, several U.S. cities said that climate action is even more important, because they understood the connection between climate and health and city budgets. And they understood that moving to renewables will actually save them money. As of June 2020, 79% of Americans think the country should prioritize its energy supply towards developing renewable energy. 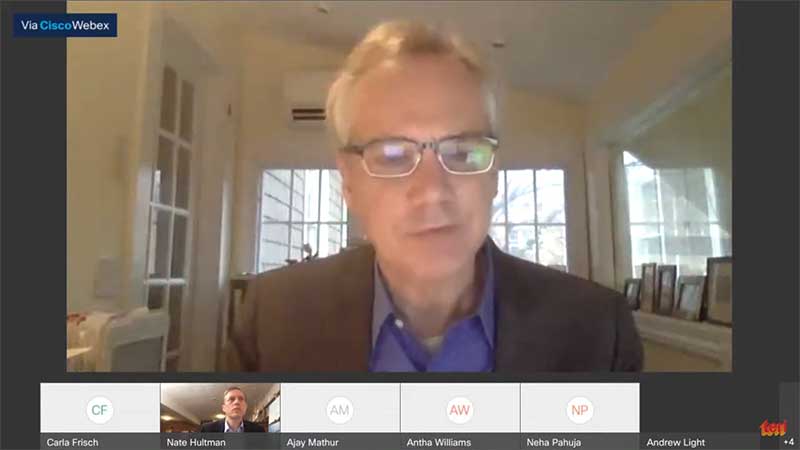 If Joe Biden can do the same thing as Obama's 2009 stimulus of 800 billion dollars, out of which 80 to 100 billion dollars went to clean energy. It was the biggest energy bill passed in one stroke in the United States. Biden could direct a similar stimulus towards states and cities and help them to reach their emission reduction potential.

Biden's big aspiration is to make climate a centre of U.S. foreign policy. We had 15 programmes on climate-energy cooperation between the U.S. and India. I would expect the U.S. comes back to look at those again, and see if they can help India achieve its own Nationally Determined targets.

The Green Deal is the top European political priority. We are dealing with the politics and the macro economics of the Green Deal in a manner that was non-existent before. There are huge shifts happening profoundly in Europe. The train has left the station. There is no going back. In June, the Commission will submit options to the Council of European heads of states and governments with regards to a possible border carbon adjustment mechanism.

Coal is an enormous issue in China with over 2.5 million workers employed in mines in 2018. There is a regional character to mitigation. Some regions in China are heavily dependent on coal, others are not. It's the same in India and the U.S. Regional dynamics and political situations are different in different countries. The linkage of climate mitigation to air pollution will continue to be extremely important in the messaging and strategy around China.

It will be good to know what the rest of the world is doing to bridge the implementation gap. How do we know that you are putting in place a domestic machinery for keeping climate commitments? Is the U.S. talking about a coordinated institutional structure that will outlast the 4 or 8 year flip flops in political parties?

We have to be careful about conversations arising from broader geopolitical tensions. Climate future for the next 20 years will be driven by what Asia does. What Asia does will be substantially driven by what China does. Then Africa. India has to be part of global conversations, it also has to be part of regional collaborations, in smaller more practical ways. Asia has an interesting shared story about building the city of the future, around renewable energy transition, about air pollution, about overseas aid.

Global Climate Politics in an Era of Disruption: Insights from the US, EU and China
Events