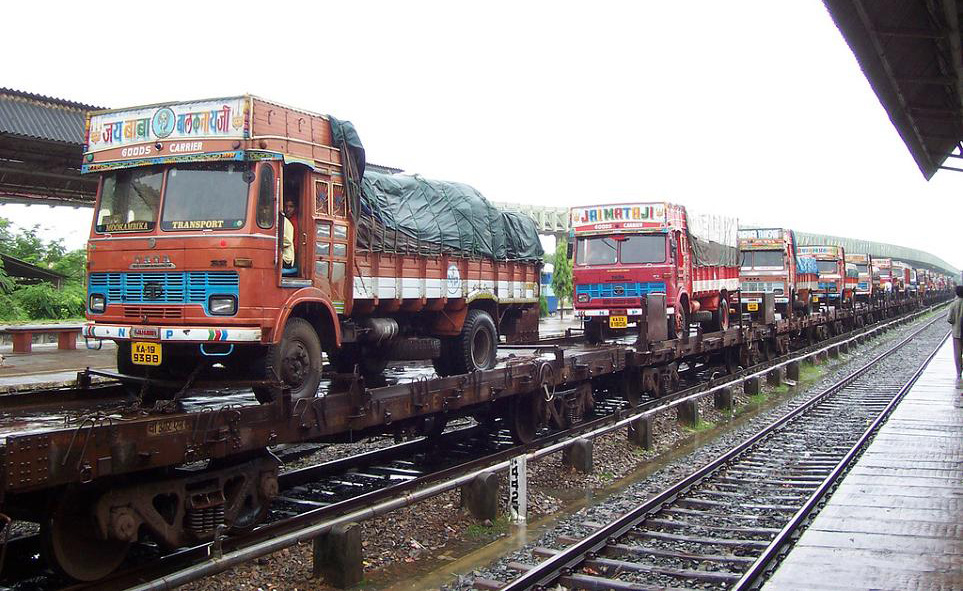 Trucks have gradually become a dominant mode of freight transport, replacing the railway, the traditional bulk commodity carrier. Crisscrossing through the country, trucks are responsible for nearly 40 percent of carbon emissions and air pollution in the urban areas.[1]

Roll on Roll off (RoRo) concept combines road and rail transport by carrying trucks on Railway wagons from origin to destination or on a section of the journey. It is incredibly beneficial for freight transporters as it combines the best features of both; the main haul by rail and first and last-mile connectivity by road while reducing diesel consumption and carbon emissions.

In India (1999), RoRo service was introduced on Konkan Railways (KR) as a dedicated facility, nevertheless, it generated additional revenue. Flat BRN wagons with strengthened base are deployed for RoRo operations, originally used for carrying steel products though the volume carried under RoRo is low. They are also used for carrying military trucks, tanks and other defence vehicles as they permit easy loading/unloading.

RoRo concept was further adopted by Indian Railways in 2016. Though the policy empowers zonal railways to fix tariff in railway’s interest, this power is rarely used. Tariff is usually determined by the Railway Board and is applicable uniformly on all zonal railways. Consequently, East Central and Northeast Frontier Railways introduced these services with a little success. South Western railway’s experiment on introducing RoRo from Bengaluru to Bale in Sholapur district stopped after a couple of trips, due to financial losses. RoRo service on Dedicated Freight Corridor (DFC) in 2021 on a single route, from Rewari (Haryana) to Palanpur (Gujarat), was likewise a non-starter.

While KR offers an attractive freight rate by considering road operational components such as truck weight, diesel prices and driver cost, as well as wagon cost and marketing charges, components of railway operations, the charging mechanism followed by IR is rather crude. The determination of the RoRo tariff comprises of three factors: per rake earnings on the proposed route, line congestion and railway expenditure. “Opportunity cost” approach is currently in practice and the charging mechanism does not account for the truck operator’s cost, but rather protects their interest.

Despite IR’s attempts, lack of network capacity, uncertain transit time, speed restrictions and restriction on carriage of bigger trucks due to low height of overhead electrical (OHE) wires remain some of the key issues. In contrast to IR, although DFC has higher OHE, better moving dimensions, and more network capacity, RoRo services have nonetheless deteriorated on DFC, due to lack of financially viable tariff for potential customers.

Owning to saturated line capacities on most routes, the rail tariff has been set higher than the break-even point to avoid losses, while first and last mile charges are add-ons, which make the competitive haulage charges of rail, uncompetitive. Approach roads are unable to accommodate heavy truck flow and terminal facilities are correspondingly inadequate. Therefore, the wear and tear of trucks increases considerably. Lack of RoRo-specific wagons is another major hassle. Flat BRNs have a width 8.7ft as compared to the width of the truck which is 8.3ft; truck drivers face issues while loading the trucks as these wagons have sharp vertical edges and even the slightest human error leads to damage to the trucks.

IR has taken several steps to improve the efficiency of RoRo services. However, there is a scope to improve the initiatives through an integrated approach to collate the interlinked factors.

A detailed analysis by identifying the routes with spare capacity and a market survey indicating the requirements, is needed for capacity-demand assessment on the proposed routes before introducing the service. Also, the selected terminals should have adequate all-weather access roads. Guaranteed transit time should be competitive with the road sector to generate confidence in the customer and improve the railway’s credibility while routes having low capacity utilization, perhaps 70% or less, should be targeted for RoRo operations.

RoRo wagons should have a flat-strong base along with rigid protective cones to keep the trucks intact during transit. IR could also explore wagons with a lower base surface, similar to wagon sets that load five containers.

Further, tariff should be competitive with an alternative mode, specific to a particular route and not necessarily with an alternate commodity with a uniform rate. Currently, it is counterproductive and is not financially beneficial for the trucking sector. It should be a stable distance-based rate which permits a sense of consistency to the customer.

Lastly, defining the role of the marketing organization as the nodal authority for bringing the traffic, maintaining contacts with the customers, determining performance parameters and assisting terminal-related activities, should be prescribed in the policy. Additionally, focus should be on bringing out more proactive policies like KR, for successful RoRo operations. The capacity augmentation on numerous routes would open up possibilities for RoRo service. DFCs with ample spare capacity, moving dimensions, and capability of running longer trains parallel to the high traffic road corridor of Delhi-Mumbai and Delhi-Kolkata are ideally suited for the introduction of RoRo service similar to what Konkan Railway did 23 years back, albeit as a small step.

Towards a Greener Future of Freight
Opinion