Our environment is being threatened by nearly every step we take in the direction of growth and development for betterment. Since our realization of the same, we have started taking the necessary steps to ensure we clean up the environment or at least attempt to do so.

The Earth is not immune to the effects of development and slowly, but surely, our actions will have irreversible consequences. One such example of the damage that our actions can cause is the reason the project, 'Petroleum Biotechnology', was undertaken, initiated, and partially sponsored by the Department of Biotechnology, Ministry of Science & Technology, Government of India, in 1991. Oil pipelines across the country-Rajasthan, Gujarat, and Assam-were bursting accidentally, spewing oil out on agricultural land, thus rendering it completely useless. As major oil companies are owned by the Government of India (GoI), so GoI was obligated to provide compensation to landowners and farmers for their ruined land and were on the lookout for a solution to fix the now oil-laden land.

Oil spills on land pose the menace of being health and fire hazards, causing groundwater pollution due to percolation into the subsurface stream of water, and air pollution due to evaporation. Not only are these oil spills hazardous to the environment, they are also responsible for the loss of livelihood for farmers and fishermen.

Apart from the oil spills and oil contamination due to an accident, petroleum refineries and the oil exploration units occupy a key role in the economy of our country. Presently, there are more than 50 oil refineries and oil exploration and production assets of various sizes operating in India; these generate a huge volume of oily sludge, oil-contaminated soil, and drill cuttings. The management of these oily wastes is one of the major problems being faced by the oil companies.

Oily waste, including oil sludge, oil-contaminated soil, drill cuttings, etc. is hazardous waste which causes enormous environmental pollution. Apart from this, the land becomes unusable and emanates poisonous gases which have an adverse impact on human health and flora and fauna.

Terrestrial pipelines for the transportation of crude oil and petroleum products to various processing units often get damaged, thus spewing out crude oil over large acreage. This damage could be attributed to the corrosion of pipelines, sabotage by insurgent elements or even theft by the puncture of pipelines.

According to the existing classification of hazardous waste, the petroleum oily waste falls under the hazardous waste category. Due to stringent norms by the regulatory authority and corporate responsibility of oil companies to protect the environment, new techniques are continuously in demand in India to manage oily sludge.

To tackle these problems, the Department of Biotechnology (DBT), GoI, initiated a programme under the theme of Petroleum Biotechnology which was led by The Energy and Resources Institute (TERI) in 1991. 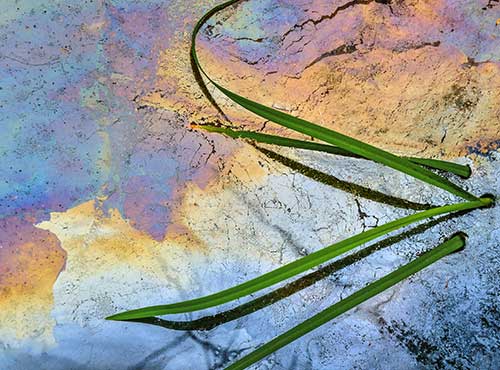 After six years of extensive research work, under the leadership of Dr Banwari Lal, TERI developed a unique technology in which indigenous microbes aid in the clean up of oily waste, including oil spills on land, oily sludge, and drill cuttings under the aforementioned DBT programme.

The first bacterial strain we isolated could degrade the aliphatic (alkane) fraction of the total petroleum. It could degrade more than 95% of this fraction in 24 hours, under laboratory conditions. We now had one bacterial strain which could effectively biodegrade the aliphatic fraction of the total petroleum into carbon dioxide and water, two harmless end products.

Similarly, the third selected bacterial strain was one which could degrade the NSO (nitrogen-, oxygen-, and sulphur-containing compounds) fraction of oily sludge (total petroleum hydrocarbon). Under laboratory conditions, it could degrade more than 95% of the NSO fraction in 24 hours.

Our fourth selected bacterial strain was capable of degrading the asphaltene fraction of crude oil and oily sludge.

Once the cocktail of four bacterial strains, now known as Oilzapper, was prepared in the laboratory, several other conditions had to be modified and standardized. The type of oil, oily sludge, the conditions of the soil, and climatic conditions, all played a vital role in the preparation of this technology.

After the microbes were tested in the laboratory, taking the DBT's suggestions into account, the bacterial system was applied on a trial basis at multi-location sites of the Indian Oil Corporation, Oil and Natural Gas Corporation Ltd, Bharat Petroleum Corporation Ltd, Hindustan Petroleum Corporation Ltd, and Oil India Ltd, for the clean up of oily waste. After successful trials at various oil-contaminated sites/oil fields in 1997 in India, the bacterial consortium was formed into a product and was designated as 'Oilzapper'. It was the first product of its kind being used extensively by all oil refineries and exploration units in India. Oilzapper was developed by assembling four naturally occurring bacterial species which could degrade fractions of crude oil, oily sludge, and drill cuttings, including polycyclic aromatic hydrocarbons and asphaltene compounds.

Various nutrient media and fermentation conditions were standardized for the mass-scale production of Oilzapper. Essentially in powdered form, the product is easy to use and can be applied efficiently, so it was produced in bulk in bioreactors and mixed with a carrier material using biodegradable powdered corncob.

It was then packed in reusable poly bags and transported to various oil refineries and oil-exploration sites for the clean up of oil spills/oily sludge/drill cuttings. Packed in reusable poly bags, or in boxes of 5 kg per bag, Oilzapper can be cut from the top and can be sprayed on oily sludge through a simple broadcasting manner. The technique to apply Oilzapper is the same as the way farmers apply urea on their fields as a fertilizer. Bacteria present in Oilzapper need their food to grow as well, so a special nutrient mixture has been designed and is provided with the bacteria since they constantly need nutrients. The nutrient mixture needs to be dissolved in a required amount of water, and, with the Oilzapper, needs to be sprayed on the oily sludge. The dosage of nutrients would depend on the number of total petroleum hydrocarbons (TPH) present in the oily waste.

Before starting bioremediation, the soil is characterized to know the level of total petroleum hydrocarbons (TPH) and its different fractions. To carry out ex situ bioremediation, oil sludge is transferred to a specially designed bioremediation pit as per the guidelines, and thereafter the Oilzapper, along with nutrients, is applied to the oily sludge as per the required quantity. After an interval of 15 days, tilling is carried out by mechanical equipment to provide the necessary aerobic condition to the bacteria for the effective degradation of oily sludge until the colour of the oily sludge or oil-soaked soil becomes black to brown, like soil. From time to time, tilling is done and samples are drawn for its subsequent analysis of TPH. Once the TPH reaches 1%, the remediation is complete. In the case of oily sludge and oil-soaked waste from oil refineries, sludge bins are used. The treated sludge should be taken out of sludge bins once these are completely oil free. This can then be dumped in the low-lying areas for its safe disposal. In an oil field, Oilzapper generally takes up to six months to remediate oil-contaminated areas.

The bacterial system, developed by TERI, proved to be incredibly effective, and ever since oil refineries and exploration units all over India and other parts of the world have been using it extensively.

A first-of-its-kind solution, the Oilzapper's uniqueness lies in the eco-friendly manner in which it detoxifies oily waste. These specialized bacteria possess the capability to break down and digest petroleum waste and convert them into harmless products, such as carbon dioxide, water, and fatty acids.

Its advantages are numerous, the foremost being that the treatment of oily sludge and oil-laden land by this novel technique is the most eco-friendly and economically viable option available. It degrades toxic hydrocarbons to two harmless end products, namely, carbon dioxide and water-both environmentally friendly. Apart from this, Oilzapper is an effective, low-cost method which cleans up and restores the site to its original condition, is easy to use, and leaves behind no harmful side effects or residues.

A patent (No. 168/DL/2000) was obtained on the bioremediation of oil spill and oily sludge-contaminated sites. The treatment of oily sludge by Oilzapper is the most eco-friendly and economically viable option. Oilzapper is effective, low-cost clean up, which restores the site to its original condition, is easy to use, and leaves behind no harmful side effects or residue.

Numerous lakes and rivers in different parts of India have so far been treated with Oilzapper which has thus been instrumental in restoring the environment and livelihood of many farmers whose land was damaged due to the oil spill. It is indeed an excellent example of harnessing science for the well-being of humankind.

Many of those whose livelihood depends on fisheries also lose their jobs as a result of oil slicks in rivers and lakes. Water in many lakes situated in different parts of India was treated with Oilzapper, which was central in reviving the income of those living the nearby areas. This has not only improved the environment in India and the countries of the Middle East but also generated employment in the regions.

When the oil spills occurred in agricultural areas, the farmers suffered the most. Their land was laden with oil and the soil was contaminated beyond repair insofar as no crops could be grown. They would then receive huge compensation from oil companies and were, therefore, vehemently in opposition to bioremediation. Farmers did not realize that due to continuous oil spills, their land was completely infertile and incapable of yielding any crops. (They thought that the compensation they received would be enough to get them by and clean up their land.) Though it was difficult to convince them that Oilzapper was the solution, later, they relented upon the realization that their land will be completely rehabilitated and will ultimately become fertile. After the treatment of the oil-contaminated area through the application of Oilzapper, value addition was done to the land and the farmers benefitted greatly.

A blessing for the oil exploration, production assets, and oil refineries, the Oilzapper has proven particularly relevant in the wake of the ever-increasing spillage of oil across land and water, the many oil transport-related accidents in the past, and oil waste management issues at the refineries, and oil assets.

In order to carry out the large-scale bioremediation, ONGC and TERI formed a joint venture known as 'ONGC TERI Biotech Ltd' (OTBL) in 2006. Thereafter, OTBL has been carrying out the bioremediation of oily waste in all the oil assets of ONGC in India. (For further details, please visit www.otbl.co.in)

The key advantages of bioremediation through the application of Oilzapper include:

TERI has also prepared draft guidelines on bioremediation through the Oilzapper technology which has been submitted to the Central Pollution Control Board for law enforcement. The same will be followed by each petroleum industry for the management of oily waste.

To conclude, the Oilzapper is an innovative, eco-friendly, and completely unique technology that has been developed through painstaking research, trials, and actual implementation. It has incredible results and has the capability to restore oil-contaminated sites to their original state. As its name suggests, it relies on the almost-magical 'zapping', a vociferous appetite possessed by certain strains of bacteria for oil.

Themes
Microbes
Tags
Petrol
Oil spill
Oilzapper
Land
Pollution
Biotechnology
OTBL
ONGC
Kuwait
Waste management
This block is broken or missing. You may be missing content or you might need to enable the original module.