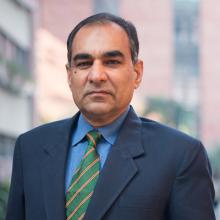 Dr Lal leads the team on the research and study related to biotechnology and bioresources, which includes conceptualizing and producing an array of ready-to-use and commercially viable products that are consumer-friendly, cost-effective, and environmentally sound.

He has almost three decades of research experience in the field of microbial biotechnology and has been with TERI since 1989. Prior to this he served at the University of Rajasthan , Jaipur , India . Dr Lal's work on bioremediation of crude oil spills, treatment of oily sludge and drill cuttings (hazardous hydrocarbon waste generated by oil industries) has led to the development of Oilzapper technology for clean up. He is also working on enhanced coal bed methane production and carbon sequestration, exploitation of metagenomics for production of biodegradable plastics, biohydrogen production, detection and control of microbial induced corrosion in oil and gas pipelines, probiotics and clinical trials and development of biological production of 2, 3 butanediol from bacterial fermentation broth.

A Joint Venture Company ONGC TERI Biotech Ltd (OTBL) of which he is also the Managing Director was created for the large-scale application of technologies developed by Dr. Lal.

Dr Lal has 8 patents to his credit and his work has been published in over 50 research papers in international and national journals and holds a Ph.D. in Microbial Biotechnology from the University of Rajasthan, India.