Air pollution is a severe problem in India with significant public health and development impacts, particularly in big cities and highly populated areas. In 2016, air pollution was the second largest risk factor contributing to disease burden in India after malnutrition (Lancet Planet Health 20191 ). The air quality in Delhi and surrounding areas is especially problematic. Delhi had the highest average level of exposure of population to PM 2.5 in 2017 (Lancet Planet Health 20192).

Source apportionment studies indicate that secondary particles are a significant contributor to PM 10 and PM 2.5 concentrations in Delhi (IITK, 2015) (NEERI, 2017) with industrial point sources being among the top four major contributors to PM 2.5. Another study reported that the transport and industrial sectors were the two biggest sources of air pollution in National Capital Region (IITM, 2018).The environmental challenge of air pollution in the greater National Capital Region (NCR) of India has led to a slew of measures across sectors – industry, agriculture, energy generation – aimed at curbing air pollution load.

In the industry sector, natural gas is well suited to provide energy solutions for needs currently being met by more polluting fuels such as coal, diesel, heavy fuel oil, and pet coke. However, the share of natural gas in India's energy mix continues to be much lower than other large economies. In 2018, it was merely 6.17% (BP 2019) as compared to 10.63% in 2010 (BP, 2011). It is envisaged that by 2030, the share of natural gas in the primary energy mix would reach 15%(IEA, 2020).

The MSME sector has a huge presence in greater NCR4. In the National Capital Territory (NCT) of Delhi, there are about 960 MSME units in industrial and non-industrial areas. Of these, more than 50% are mainly in four industrial areas of Wazirpur, Lawrence Road, Narela, Badli, and Bawana. As per data collected by TERI, there are over 100 industrial areas and thousands of MSMEs operating in in the NCR, representing multiple sub-sectors such as leather goods, garments, textiles, cold storages, utensils, auto components, sports goods, mixed engineering, forging, plastic injection moulding, oil mills, food processing, secondary steel etc. Additionally, a large number of brick kilns, which primarily use coal as a fuel, also operate in the region.

In this background, TERI undertook a study5 , supported by the World Bank, to assess the potential and impact of a switch to natural gas from heavier polluting fuels in the MSME sector in NCR. The project was initiated with an overall objective to assess the potential role of natural gas as a cleaner alternative fuel to improve air quality in urban areas of India and inform policy for designing interventions to increase the uptake of gas. The following are some of the key findings to emerge from the study.

Cost competitiveness of natural gas compared to other fuel options

The delivered cost of fuel plays an important role in energy transition. Presently, the prices of coal and petcoke are much more competitive than natural gas. However, the competitiveness of liquid fuels such as LDO, HSD, furnace oil, LSHS (on energy equivalent basis) are fluctuating majorly because of the global volatility of crude and natural gas prices, government policies, and distance from the source point etc. The price differential between liquid fuels and natural gas has been observed to increase with the distance from the refineries and liquefaction terminals, thus making natural gas less cost competitive. For instance, in the Karnal region, which is closer to the IOCL Panipat Refinery, the price of LSHS is much lower than its delivered price in other distant regions in the NCR.

It was observed that a significant number of MSMEs were reluctant to make the switch from their existing fuel source. This may be attributed to high up-front costs (connection and security deposit), limited access of natural gas everywhere, and its higher unit price compared to other options, thus putting a question mark on its overall economic viability. End users also need to pay a conversion cost to operate on natural gas and have to bear the cost of internal piping infrastructure.

A major proportion of MSMEs, specifically micro units, are located in non-conforming areas6 where natural gas penetration is a challenge. Gas supply utilities are averse to laying gas distribution network in such areas due to policy uncertainty regarding investments. Furthermore, many units in non-conforming areas are not in favour of switching to alternative cleaner fuels as this would entail bringing them under the ambit of regulatory compliances.

The most significant process for usage of natural gas was found to be in burners and boilers which require a substantial amount of heat for processing. It was observed in some instances that the presence of energy efficiency service providers can contribute to a reduction in the consumption of natural gas. For instance, TERI's earlier work on energy audits and energy-efficient technology development in the Firozabad glass bangle industry cluster revealed that the new design based on natural gas for pot furnace and muffle furnace was energy-efficient as compared to existing coal fired furnace (>50% energy savings) as well as other retrofitted gas furnaces (30-35% energy savings) being used in the cluster. Adoption of TERI designed pot furnaces resulted in natural gas savings of the order of 0.15 Sm3/kg glass melt.

The availability of pipeline infrastructure in the vicinity of the units is also a concern for industries willing to switch to natural gas. In terms of pipeline access, MSME units operating in clusters derive a clear competitive advantage from dispersed units. For example, in the Aravalli mountain region, the nature of geological terrain constraints the setting up of requisite infrastructure and increases the cost of laying pipelines, thus affecting access by the end user.

Complexity in procedures such as difficulty in getting Right of Way and other clearances from state/local government to lay the pipelines contribute to delays in setting up the pipeline infrastructure. Coordination between central/ state/local governments is crucial to fast-track the development of city gas distribution (CGD) networks and transition of industries to clean energy. From the perspective of CGDs7 , the key concerns in adoption of natural gas are price, lack of incentives and support from government, and switch over cost. Some CGD companies are offering flexible agreements such as Minimum Guarantee Offtake (MGO) and non-MGO (lower contract rigidity), where the prices are lower for MGO customers as compared to non-MGO customers. Also, they are providing flexibility in contracts once in a month. Till date, a majority of customers are non-MGO contract based.

In order to spur greater use of natural gas, the study recommended adopting a cluster-based approach for penetration of natural gas in MSME units, recognising well-defined potential users of natural gas, improving the availability of appropriate information related to natural gas use, identifying technology and finance related needs in monitoring and evaluation; and, reduction in transaction cost. Further, offering flexibility in contracts as per the industrial (category) needs would also help. There is also an opportunity for natural gas penetration provided the prices are rationalised, energy efficiency measures are put in place, and proper regulations are imposed to restrict the consumption of polluting fuels. Government can play an important role in large scale adoption of natural gas by the MSMEs by facilitating creation of necessary infrastructure to ensure reliable supply or supply of natural gas at a subsidised rate to the MSMEs.

The regulations in the MSME sector have provisions for upgrading technology and application of new clean technologies, and there is scope for capitalising on this. The role of the government in facilitating creation of necessary infrastructure to ensure reliable supply or supply of natural gas at subsidised rates is also important to enable large-scale adoption of natural gas by the MSMEs. Various government departments have programmes and schemes related to enhancing clean energy measures, but are working in silos. Several government ministries, regulatory boards, natural gas supply companies, MSME units and associations, and related data centres are relevant stakeholders for switching over to clean fuel and for promoting energy efficiency initiatives in the MSME sector (see, figure). Therefore, it is important that proper coordination between various related programmes and schemes on clean energy, energy efficiency, technology upgradation, database generation, reporting and monitoring and capacity building takes place and that there is a confluence of actions at the delivery point. It is imperative to provide an all-round support to the MSME units extended through cluster level stakeholder engagements involving government agencies, city gas distribution companies, legal and financial institutions, and local industry associations/chambers of commerce. 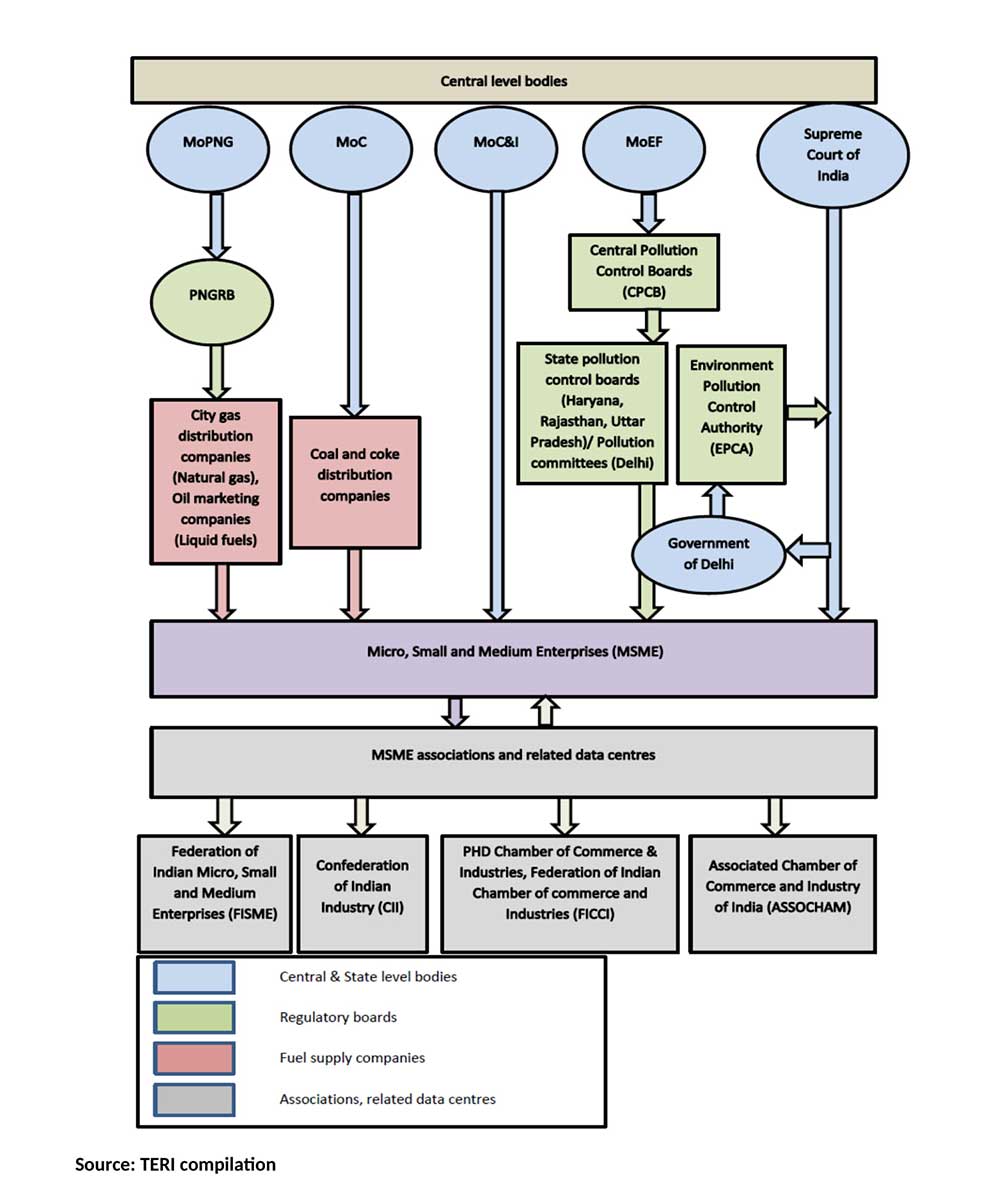 [4] The study focused on the National Capital Region (NCR), which is a coordinated planning region centred about the National Capital Territory (NCT) of Delhi. It encompasses the entire NCT of Delhi and 24 adjoining districts from the states of Haryana, Uttar Pradesh, and Rajasthan.

[6] Non-conforming industrial areas, are spaces of manufacturing activity that have emerged in and around residential areas, predominantly around urban and rural villages in response to a range of market demands. These areas are unplanned, unauthorised and 'non-conforming' in the sense of being located in areas not zoned for industrial use. Many of these unplanned industrial areas could be said to have come up on village lands earmarked for residential and/or agricultural use.

Hope on air quality: How air quality in north India can be transformed within 5 years
Opinion