A Critical Analysis of Article 4.19 of the Paris Agreement

While there is a growing narrative by countries to include adaptation within their long-term strategies (LTS), however such narratives have not translated into a very high-level of integration with concrete 'formulation' and 'communication'.

The Paris Agreement, or Agreement in brief, was successfully crafted by the parties to the United Nations Framework Convention on Climate Change (UNFCCC) and covers the traditional themes of inter alia, mitigation, adaptation, finance, and capacity building. It aims to attain a synergy between mitigation and adaptation climate action targets, as multiple benefits of their amalgamation have been recognized (Locatelli, Evans, Wardell, Andrade, & Vignola, 2011). The Agreement strengthens the coordinated global response to successfully holding the increase in the global average temperature to well below 2°C above pre-industrial levels and pursues efforts to limit the temperature increase to 1.5°C. Pursuant to this goal, the Agreement calls parties, by laying down in Article 4.19, to:

While strides have been made to include mitigation and adaptation as compliments rather than substitutes in the Paris Agreement, this was not always the case as climate policies have conspicuously excluded 'adaptation' as an agenda (Mathur & Mohan, Plus ça change, plus c'est la même, 2016). There has been a tendency to restrict the discourse on adaptation by developed nations since it invokes questions on historic responsibility and who should the liability to pay for adaptation fall on (Mathur & Mohan, Plus ça change, plus c'est la même, 2016). It is with the increasing severity of climate impacts felt in the early 2000's, that the role of adaptation was recognised and it was realized that focussing solely on mitigation is insufficient (IPCC, 2016). Differentiating the two, while adaptation refers to an adjustment in different contextual systems in an attempt to moderate the impacts of climate change (UNFCCC, 2015) mitigation refers to an intended intervention made with the intent to reduce greenhouse gas emissions (UNFCCC, 2009).

Article 4.19 remains largely silent on changing climate conditions; in short, it is largely devoid of the mention of climate resilience which is the core of adaptation. To adapt, is to build and pre-empt future impacts, and to develop low greenhouse gas emission development strategies is largely a mitigation centred approach. In this aspect, it can be said that Article 4.19 lacks a vision for synergistic low carbon and climate resilient strategies.

While the wording of Article 4.19 places adaptation measures at a secondary level to that of mitigation as the latter directly concerns the lowering of greenhouse gas emissions, it may be true that the two may converge, as a target may provide for both a reduction in GHG emissions as well as build capacity towards resilience. For instance, a solar distributed grid system which displaces fossil fuels could also help in keeping lights on for longer durations which could help in resilience to storms that knock down power lines. Such occurrences are however, rare which means that Article 4.19 fails to take advantage of a holistic integrated approaches that focus on both adaptation and mitigation measures. At the same time, there may be instances where pure adaptation is needed to ensure survival of communities and ecosystems without any linkage to mitigation.

It may be contended that there is a growing narrative by countries to include adaptation within their LTS, however this may be counter-argued as such narratives have not translated into a very high-level of integration with concrete 'formulation' and 'communication'. Illustratively, the focus in Canada's long-term strategy has been primarily on mitigation, with a mention of adaptation in the areas of sustainable forest management to tackle the challenges of adaptation and mitigation. The LTS refers strongly to the Pan Canadian Framework on Clean Growth and Climate Change to build resilience capacities (UNFCCC, 2016). Of the countries that have announced their LTS beforehand—such as France (UNFCCC, 2021), Germany (UNFCCC, 2017), USA (UNFCCC, 2016) and UK (UNFCCC, 2018)—have inserted adaptation as a complimentary strategy to other separate already existing (or to be announced) adaptation strategies, except for Mexico which addresses both adaptation and mitigation under two separate chapters.

South Africa has specified that an effective adaptation planning regime covering at least 80% of the South African economy by 2025 will be in place. Mexico's LTS has specified strengthening adaptive capacity of at least 50% the number of municipalities in the category of "most vulnerable", establish early warning systems and risk management at every level of government and reach a rate of 0% deforestation by the year 2030. Fiji has referred to concrete measures under their National Adaptation Plan (NAP) of 2018. Netherlands can be considered to have a strong adaptation component under LTC as they have quantified targets in line with their National Climate Adaptation Strategy (NAS) 2016 and the NAS Implementation Programme which includes a developing a coherent set of standardisation measures and supporting instruments with final standards by 2050.

Figure 1: Strength of LTS with specific reference to adaptation 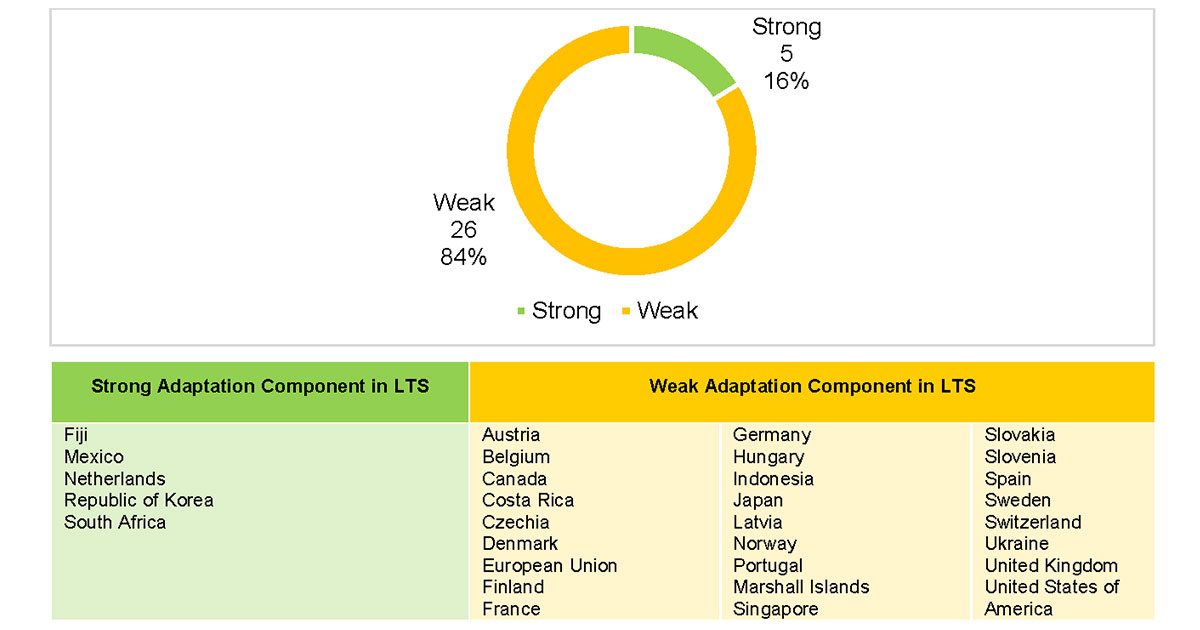 Amongst the countries that have more recently submitted their LTS, there is some focus on adaptation, but it fails to gauge the interactional framework of mitigation and adaptation that the Paris Agreement seeks to address. While most of the countries mention adaptation, the measures are very broadly worded and lack traceability to private or National Adaptation Plans. For example, Slovenia recognizes the importance of integration of mitigation and adaptation, however, does not engage well in terms of quantified goals or targets with the Strategic Plan of the Common Agricultural Policy, which still must be drafted (UNFCCC, 2021). While Hungary delineated its goals from the National Adaptation Policy in the LTS, it minimally engaged with the goals, rather provided for a set of broad measures across various sectors (UNFCCC, 2021).

The importance of linking the National Adaptation Plans/Strategic Plan of the Common Agricultural Policy to a long-term strategy cannot be understated since if sector specific targets of both mitigation and adaptation are integrated into one strategy then an easy identification of the trade-offs can be done to compare similar objectives (Salve, 2021). Therefore, having separate documents that cover adaptation and resilience is a less effective strategy than having adaptation and mitigation objectives forming part of a unified document. A mitigation centred approach under Article 4.19 has consequently led to countries ignoring adaptation and focusing heavily on mitigation as a strategy to combat climate change.

This tendency is not just limited to Article 4.19 and can also be seen in the general framework developed under the Paris Agreement. Even though increasing adaptation to foster climate resilience is one of the primary goals and objectives of the Paris Agreement under Article 2 and Article 7, they have not received sufficient attention from the drafters and leaders alike. An example of this is that NDCs of nations are primarily focused on emissions reductions, which is a mitigation measure, while the inclusion of adaptation measures in NDCs is merely optional and not necessary. Further, adaptation provisions under the Agreement are less precise and limited to qualitative thresholds. Further, they are qualified using expressions such as "recognize the importance of", "as appropriate", or "acknowledge", which show the soft stance taken by the drafters towards the implementation of these measures. This is in stark contrast to mitigation measures which are laid down in specific and strict terms with explicit quantitative targets that countries must achieve.

A clear illustration of this can be seen in Article 4 and 7. Article 4.2 says that all parties "shall" pursue domestic mitigation measures and shall prepare, communicate, and maintain their NDCs which include mitigation related emission targets, every five years. Au contraire, Article 7.10-7.12 of the Agreement, which talks about adaptation communication, says that states "should, as appropriate" submit their adaptation communications and update them periodically. Here again, the use of the words "as appropriate" shows that the threshold for adaptation measures is much lower than mitigation. There is also no specified time limit in which the communications have to be updated and a lot is dependent on voluntary actions by nations, which cannot be relied upon to ensure effective and efficient measures are taken by nations.

Such a soft and lenient stance by the drafters towards adaptation has also led to the focus and efforts of nations being more inclined towards mitigation with adaptation receiving much less attention under the Paris Agreement, even though it is equally significant in the fight against climate change. In 2019, the African Group requested a new agenda item on the Global Goal on Adaptation, which is enshrined in the Article 7, Paragraph 1 of Paris Agreement. For COP26, the expectations will be around the concrete outcomes for achieving this Goal. There needs to be a stronger momentum to concretize 'adaptation' in climate negotiations outcomes. Article 22 of the Paris Agreement helps provide the procedure for amendments, laying down that Article 15 of the UNFCC applies mutatis mutandis to the Paris agreement. Members should, apropos Article 22 take the onus of proposing for amendments in the Paris Agreement to include higher thresholds, clear targets, and stringent obligations on nations to ensure that the overall objectives of the Paris Agreement can be met. There will be a growing pressure on developing countries to submit their LTS. While formulating and communication of LTS is important, developing countries should in this regard play a key role in tabling proposals for a more concrete agenda on Adaptation in terms of 'formulation' and 'communication' under Article 4.19.

Themes
Climate
Tags
Climate adaptation
Climate change
Climate policy
This block is broken or missing. You may be missing content or you might need to enable the original module.