Biodiversity, Pandemics, and the Web of Life

India can restore biodiversity in urban and rural areas by creating green corridors in cities and rejuvenating water bodies in rural areas.

Biodiversity, a contraction of biological diversity, supports everything in nature that living organisms need to survive: food, water, medicine, and habitat. Biodiversity is a complex web of ecosystems, species, and genetics. Humans are woven into this too. When just a few strands are lost in that shared environment, our own health is threatened. Cutting too many links of this safety net may unravel it all.

World Environment Day 2020 celebrated the role of biodiversity. In the last few decades, we have used up a lot of land — to build our cities, farms, industries — and in doing so, we have destroyed habitats and displaced several species. As urban and periurban areas expand, pristine natural spaces disappear. Closer contact with animals allows more diseases to pass between humans and other species. As a result, new and emerging global pandemics are increasingly zoonotic in origin. How do we make our living spaces more resilient and more livable? 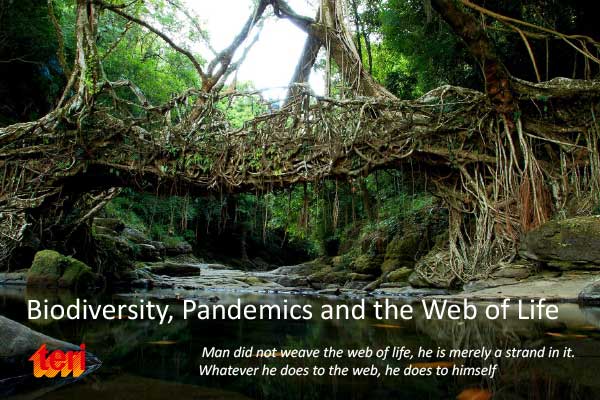 Green leads to greener. The creation of green corridors in our cities will restore biodiversity by patching up fragmented natural habitats. Apart from enriching biodiversity in our cities, these green spaces reduce the urban heat island effect, soak up air pollution, slow down extinction rates, and improve water availability. Long stretches of urban and periurban green corridors in the form of city forests and district parks are ideal examples.

Similarly, small water bodies have a huge potential to revive biodiversity in rural India. Rejuvenating ponds and lakes will create multiple benefits such as sustaining native biological diversity, soil enrichment, and provision of water during dry spells. If these small water bodies are interconnected through a network of green corridors, it can spawn a whole biodiversity-rich ecosystem.

All of this requires action at the local level, and involvement of citizens and communities, in restoring biodiversity as well as sharing the benefits thereof.