The TERI-KAS Energy dialogues would be a series of conferences that would deliberate on some major challenges and opportunities that are prevalent in Indian energy sector and its implications for the world.

India’s Role in Global Energy Governance Framework: 2040 and Beyond 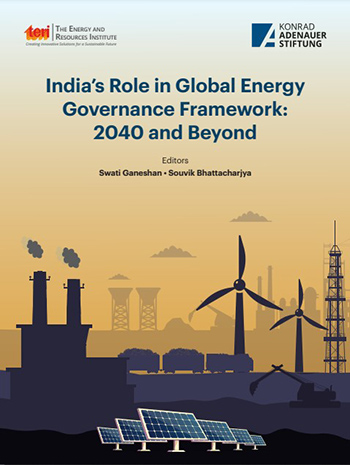 Attaining energy security has been one of the central pillars for every nation in the world. Developing countries like India have been steadily working towards a self-sustained, self-reliant energy future. In the past two decades, India has changed its energy mix significantly by increasing the share of clean energy sources. There are two determinants of energy that need to be considered when discussing energy security- rising energy consumption and energy choices. India has been actively seeking renewable energy sources, yet the proportion of conventional energy sources like oil, gas and coal is still significant and would continue to remain so. India will remain a major conventional fuel consumer for the first half of the 21st century and is pursuing ambitious climate change goals that would have a direct impact on the energy security framework of the country.

The change in India's energy security framework is clearly evident in its geopolitics and foreign policy relations. India has emerged as the flagbearer for the adoption of solar energy with the formulation of the International Solar Alliance (ISA). The alliance now has a growing list of member countries jointly working towards a global implementation of solar energy initiatives. With the mounting challenge of addressing climate change and sustainable development concerns, the need to address India’s energy security framework within geopolitical, governance and SDG framework is pertinent and the need of the hour.

The Energy dialogues jointly implemented by Konrad Adenauer Stiftung India office (KAS) and The Energy and Resources Institute (TERI) deliberated on some major challenges and opportunities that are prevalent in the Indian energy sector and its implications for the world.

The publication is the culmination of joint efforts to bring together academicians, policymakers and thinkers on energy security, to discuss the new paradigms, perspectives and approaches that are shaping the global energy discourse.

Themes
Energy
Tags
Clean energy
Renewable energy policies, regulations
Energy policies
This block is broken or missing. You may be missing content or you might need to enable the original module.