TERI in collaboration with National Institute of Technology (NIT), Goa successfully completed implementation of the project on “Off the grid sensor-controlled irrigation using bank filtration technology" sponsored by Department of Science and Technology, Government of India, under the umbrella of Demand Driven Mission - Water Technology Initiative. The aim of the project was to provide clean water to farmers for irrigation through River Bank Filtration (RBF) technology coupled with sensor controlled irrigation system which is the first of its kind in the state of Goa. The project team installed affordable RBF wells for the treatment of polluted water from Sal River near Navelim and Nauta lake at Cortalim, Goa, powered by renewable energy resource (solar powered pump) figure 1a and 1b. The technology of Bank Filtration (BF) operates by extracting water from wells located near rivers or lakes. Most of the extracted BF water originates from the river. This was confirmed with isotope analysis which suggested that RBF well water at Chaudder lake site is almost exclusively derived from lake and RBF well closer to the Sal river is isotopically similar to the river water. In this process, as the river water infiltrates into and passes through the riverbed sediments, contaminants like bacteria and toxic metals are removed by overlapping biological, physical, and chemical processes thereby improving the water quality. Water analysis of the source and BF water has revealed the effectiveness of the BF system to improve water quality. 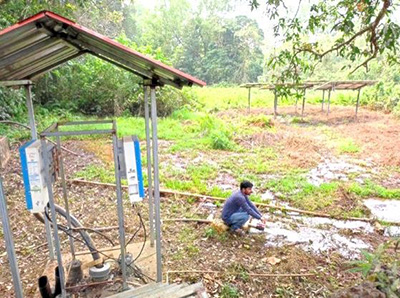 IoT based irrigation system was installed for efficient water usage in the field and for the ease of operation. In this system, the field is divided into sub-section as per the crops grown or as per the convenience of the farmer. 1 soil moisture sensor and 1 motorized valve is installed in each of the sub-section. Through a web app, farmers are able to monitor the moisture content in each section. Data of sensors is used to display the moisture content in percentage. Whenever a certain section moisture level falls below minimum required, the app notifies the farmer. Then the farmer, by using that same app, can open the valve of that section and start the water pump to irrigate that section. Irrigation is done using a rain pipe system. Once moisture content reaches the maximum threshold farmer is again notified by the app to turn the motor off. This implementation helps optimal use of water as well as avoids top soil erosion due to traditional flooding techniques. Also allows farmers to use the system from anywhere in the world where he/she has access to the internet.