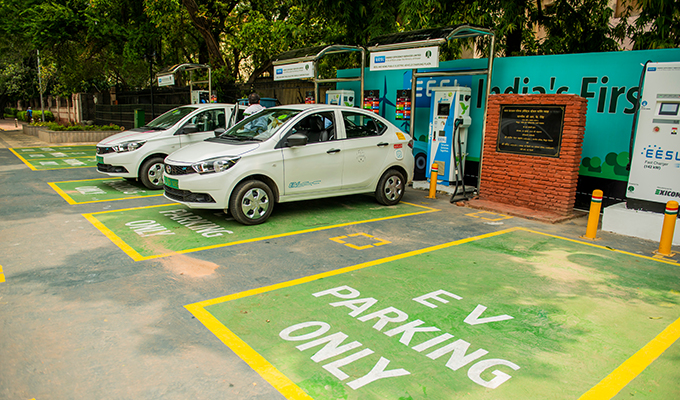 Multi-pronged strategies are required to reduce emissions from the transport sector to achieve the climate change goals. TERI, in this project looked at the decarbonization strategies and the impact of EVs on energy demand and load curve in detail.

Looking at the current trajectory of emissions, air pollution and congestion levels, the current reliance of mobility needs on fossil-fuel-intensive motorised vehicles is a cause of concern for India’s policy makers. India's transport sector has been largely dominated by consumption of conventional fuels and accounts for 70% and 99% of the total high-speed diesel and petrol consumption, respectively.

Decarbonisation of the transport sector can be done by adopting four key strategies– modal shift, vehicle efficiency improvement, electrification of vehicles, and use of alternate fuels. From vehicle efficiency improvement perspective, the Government of India has already implemented several policy initiatives such as adoption of improved Bharat Stage standards for auto fuels, and Corporate Average Fuel Efficiency (CAFE) norms for light-duty vehicles. Additionally, it is also in the process of implementing vehicle-based efficiency norms for other vehicle segments.

Electrification of vehicles is another area where several policy provisions have been made both at the national and state level. Major push is also being provided towards the promotion of alternative low carbon technologies such as biofuels, CNG, LNG and Hydrogen across different transport segments.

Given that there are several policy and technological alternatives that could be adopted across modes with varying levels and timings of adoption, the country could have significantly different energy requirements in future with varying emission levels and significantly different economic and social implications as well. Thus, it is necessary to evaluate the relative techno-economics of various alternatives and examine the role various options could play in enabling a smooth transition in the transport sector.

TERI, through this activity, was engaged in undertaking research work in two specific areas:

Decarbonization of Transport in India: Present Status and Future Pathways

This study aims to better understand the potential of present decarbonization policies in India to reduce emissions by 2050 and identify further actions to enable deeper decarbonization.

Globally transport accounts for 23% of the energy-related CO2 emissions that feed global warming. Furthermore, carbon emissions from the sector are estimated to grow faster than most other sectors in the coming future. As such, decarbonisation of transport has a seen growing sense of seriousness among policymakers and is being viewed as an essential means to achieve the global climate change mitigation targets. 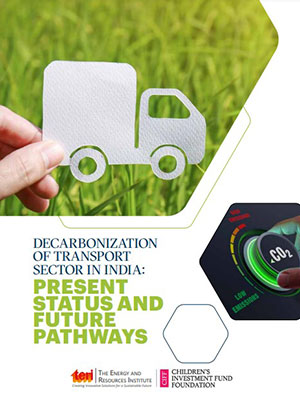 The transport sector in India is presently powered by carbon-intensive gasoline-based fuels. India’s Third Biennial Report (2021) estimates that 274 million tonnes of annual CO2 equivalent emissions could be attributed to the transport sector in 2016. This is about 11% of the net emissions from the entire Indian economy in the same year. While these numbers are extremely high, they are still well below the highest emitters with similar populations, such as China and the United States. But this is likely to change in the future as the present motorisation rate of India is much lower than the the two countries mentioned above.

In this regard, the report aims to develop a better understanding of the present policies targeting emission reduction of India's transport sector by 2050. In addition, it also works towards identifying actions that could further aid in deepening the decarbonisation of the transport sector.

To this end, the report highlights some action areas, specific actions within which are detailed in the study. They key action areas include:

Decarbonizing Transportation in India: Policy Framework, Charging Infrastructure, and Impact of Electric Vehicles on the Grid by 2030

Decarbonising India's transport would be crucial for the country to realise its NDC targets. To facilitate the same, the report provides a better understanding of key areas such as battery swapping, public charging, policy interventions, and more for a smooth transition to EV as the share of variable renewable energy in the grid increases by 2030.

India's transport sector has witnessed an immense growth since last decade owing to the country's rapid urbanisation and rise in economy. Today, almost 24% of the direct CO2 emissions at the global level are contributed by road transport itself. Thus, it is critical to curb vehicular emissions through increased uptake of Electric vehicles together with fair availability of charging infrastructure at public as well as private premises. 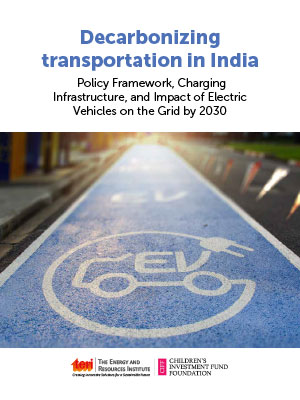 To decarbonise the transportation and meet India’s NDC ambition, Government of India launched the Faster Adoption and Manufacturing of (Hybrid and) Electric Vehicles in India (FAME India) under the National Electric Mobility Mission Plan (NEMMP) in 2015. This has provided an impetus towards charging infrastructure, creation of demand through financial incentives and technology push while simultaneously pumping in $1.4 billion in investments to spur EV growth in the country. As projected by NITI Aayog, if FAME II and other measures are successful, India could realize EV sale penetration of 30% for private cars, 70% for commercial cars, 40% for buses, and 80% for two- and three-wheelers by 2030. Such high growth of EVs must be backed by strong policy push for charging infrastructure availability and augmentation of distribution networks to support the incremental EV demand. This is of particular importance given the fact that intermittent charging behaviour can lead to peak loading and distort the utility power procurement.

With this background, the report aims to provide a better understanding of the measures required to ensure a smooth EV transition as the share of variable renewable energy in the grid increases by 2030. Some of the key areas where we focus in this report are highlighted below:

Tags
Electric vehicles
Road transport
Transport
Partners
CIFF
Themes
Transport
This block is broken or missing. You may be missing content or you might need to enable the original module.